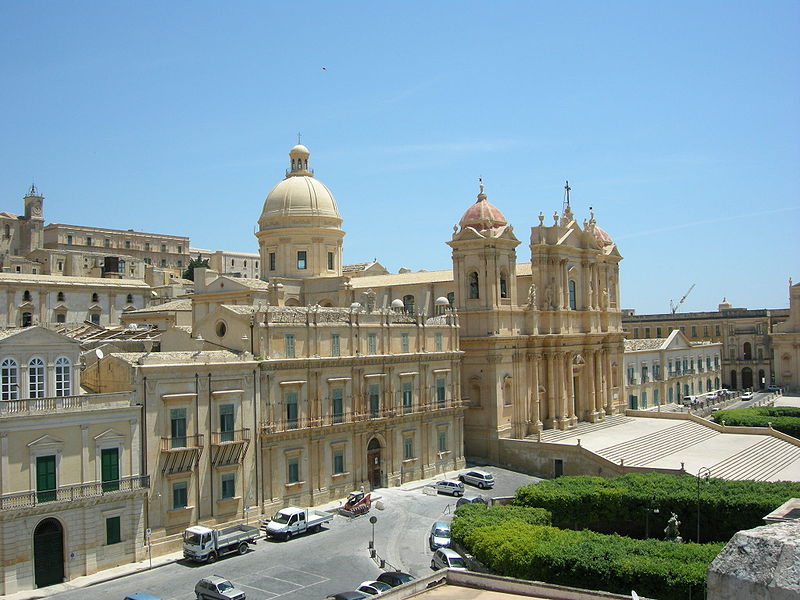 The eight towns in south-eastern Sicily: Caltagirone, Militello Val di Catania, Catania, Modica, Noto, Palazzolo, Ragusa and Scicli, were all rebuilt after 1693 on or beside towns existing at the time of the earthquake which took place in that year. They represent a considerable collective undertaking, successfully carried out at a high level of architectural and artistic achievement. Keeping within the late Baroque style of the day, they also depict distinctive innovations in town planning and urban building.

The Late Baroque Towns of the Val di Noto is comprised of components of eight towns located in south-eastern Sicily (Caltagirone, Militello Val di Catania, Catania, Modica, Noto, Palazzolo Acreide, Ragusa and Scicli). These historic centres and urban environments reflect the great, post-seismic rebuilding achievement of the decades following the catastrophic earthquake of 1693, which ravaged towns across south-eastern Sicily. The rebuilding, restoration and reconstruction of these communities resulted in the creation of an exceptional group of towns, all reflecting the late Baroque architecture of the 17th century in all its forms and applications.

The eight components of the property differ in size and represent a range of responses to the rebuilding needs. They include the entire old town of Caltagirone, Noto and Ragusa; specific urban areas of Catania and Scicli; and isolated monuments in the historic town centres of Modica, Palazzolo Acreide and Militello Val di Catania. Catania was rebuilt on the site of the original town while others, such as Noto, were rebuilt on new sites. At Ragusa and Palazzolo Acreide, new urban centres were created next to the ancient ones. The centres of Scicli and Modica were moved and rebuilt in adjoining areas already partially urbanized, and Caltagirone was simply repaired.

The towns exhibit a plethora of late Baroque art and architecture of high quality and of a remarkable homogeneity as a result of the circumstances of time, place, and social context in which they were created. However, they also display distinctive innovations in the town planning and urban rebuilding. The property also represents a considerable collective undertaking in response to a catastrophic seismic event.

Criterion (i): The Late Baroque Towns of the Val di Noto in south-eastern Sicily provide outstanding testimony to the exuberant genius of late Baroque art and architecture.

Criterion (ii): The Late Baroque towns of the Val di Noto represent the culmination and final flowering of Baroque art in Europe.

Criterion (iv): The exceptional quality of the late Baroque art and architecture in the Val di Noto lies in its geographical and chronological homogeneity, and is the result of the 1693 earthquake in this region.

Criterion (v): The eight Late Baroque Towns of the Val di Noto in south-eastern Sicily are characteristic of the settlement pattern and urban form of this region, are permanently at risk from earthquakes and eruptions of Mount Etna.

Catania is a city of 310,000 people (2019) on the eastern coast of Sicily at the foot of Mount Etna, the biggest volcano in Europe. It is the second largest city in Sicily with the metropolitan area reaching one million inhabitants, a major transport hub, economic centre and a university city where you will enjoy a busy downtown and an active nightlife. Catania is also well known for its particular baroque architecture and urban design (the downtown area is a World Heritage Site, along with all the Val di Noto area), consequences of the great earthquake of 1693 after which the city had to be rebuilt, like most of eastern Sicily. The city has a history dating back 2,700 years, dominated by several different cultures (Greeks, Romans, Arabs, Normans, Spanish, etc.) and was a rich commercial centre, mainly due to its port. Again, since the 1970s, the city economy is growing as the urban area and the suburbs, making Catania a large metropolitan centre, mainly between the volcano and the sea [read more].

Messina is a port in the northeast corner of Sicily. Most visitors are passing through, on the 5-km ferry-crossing to mainland Italy. Although it dates to ancient times, Messina is modern and nondescript. Older buildings were mostly destroyed by the great earthquake and tsunami of 28 Dec 1908, then Allied bombing in World War II finished what was left. Nevertheless, it has enough sights to justify spending a day. One modern claim to fame is that in June 1955, Messina hosted the conference that set up the European Community and common market, later the European Union. The Tourist Information Centre is just outside the railway station. Open M-F 09:00-13:00 and 15:00-17:00 (M W to 18:30). Messina has a Mediterranean Climate with mild, moderately rainy winters and hot, dry summers. It features the wettest conditions amongst the major cities of Sicily, and is significantly rainier than nearby Reggio di Calabria as well. Sunshine is virtually guaranteed in summer and stays abundant in winter [read more].

Palermo is on the northern coast of the Italian island of Sicily. It is a city with a thousand years of history, beautiful Arab-Norman architecture, amazing food, and lively neighbourhoods. It is a bit scruffy around the edges, but a visit of a few days will make you want to stay for weeks. It’s the capital city of the autonomous region of Sicily and of its own province. The city’s economy is based on local government institutions, port, shipbuilding industry and the mechanical industry. It is also seat to some important Sicilian wine-making companies (like Tasca d’Almerita, Duca di Salaparuta, Corvo, and Planeta) whose popularity in the world is growing. Capital of Sicily, founded by Phoenicians under the name of Ziz (= Flower, but the meaning is still doubtful), later renamed by Greeks Panormos, which means “all port”. It reached its golden age during the Arab domination (from 9th to 11th centuries AD) when it became one of the most prosperous cities in the Mediterranean and Europe, known as “city of delights” for its marvelous and lavish gardens, as well as for magnificent mosques and palaces [read more].