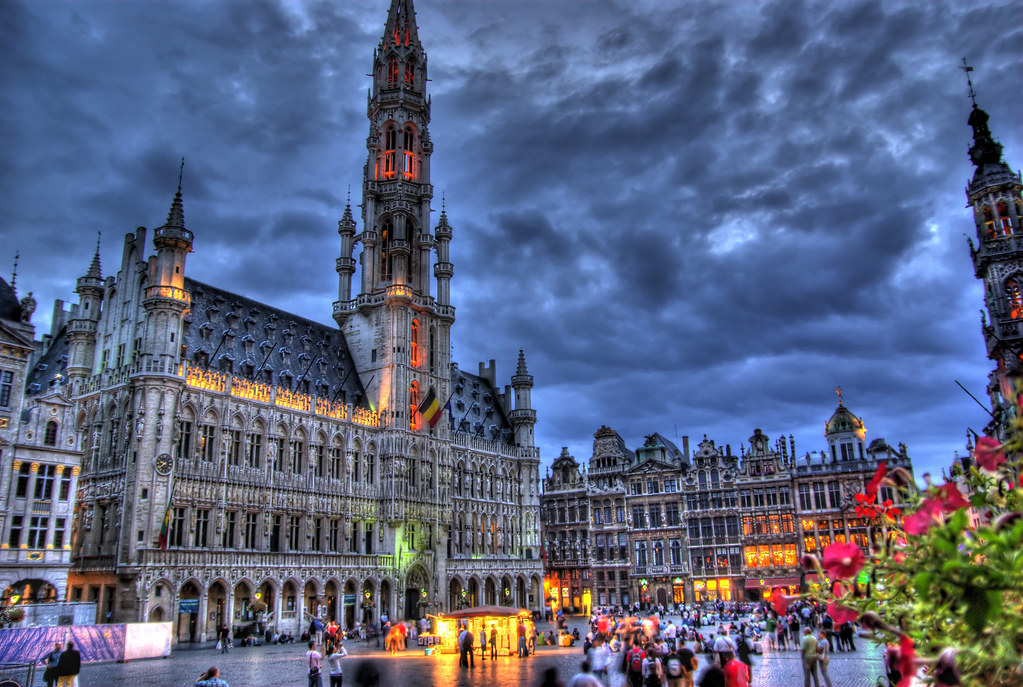 La Grand-Place in Brussels is a remarkably homogeneous body of public and private buildings, dating mainly from the late 17th century. The architecture provides a vivid illustration of the level of social and cultural life of the period in this important political and commercial centre.

Around a cobbled rectangular market square, La Grand-Place in Brussels, the earliest written reference to which dates back to the 12th century, features buildings emblematic of municipal and ducal powers, and the old houses of corporations. An architectural jewel, it stands as an exceptional and highly successful example of an eclectic blending of architectural and artistic styles of Western culture, which illustrates the vitality of this important political and commercial centre.

The Grand-Place testifies in particular to the success of Brussels, mercantile city of northern Europe that, at the height of its prosperity, rose from the terrible bombardment inflicted by the troops of Louis XIV in 1695. Destroyed in three days, the heart of the medieval city underwent a rebuilding campaign conducted under the supervision of the City Magistrate, which was spectacular not only by the speed of its implementation, but also by its ornamental wealth and architectural coherence. Today the Grand-Place remains the faithful reflection of the square destroyed by the French artillery and testifies to the symbolic intentions of the power and pride of the Brussels bourgeois who chose to restore their city to its former glory rather than rebuild in a contemporary style, a trend commonly observed elsewhere.

A pinnacle of Brabant Gothic, the Hôtel de Ville (City Hall), accentuated by its bell tower, is the most famous landmark of the Grand-Place. Built in the early 15th century, the building partially escaped bombardments and underwent several transformations over time. Its ornamental programme is largely due to the restoration campaigns conducted in the late 19th century. Facing it, the King’s House, rebuilt in the historicist vein, is perfectly integrated into the ensemble. Its elevation is in keeping with the Gothic style edifice prior to the bombardment and testifies remarkably to the ideals of the contextual conservation of monuments advocated in the 19th century. The King’s House has been occupied for decades by the City Museum. On both sides of these monuments symbolic of public authority were houses occupied by powerful corporations. Each different but built over a very short time, they illustrate remarkably the Baroque architecture of the late 17th century, with a singular treatment of the gables and decorations, sometimes fretted, sometimes more classical. Each house has a name and specific attributes, heightened with gold, reminiscent of the status of its occupants. It is interesting to note that this is a rare example of a square without a church or any other place of worship, which emphasizes its mercantile and administrative nature.

Criterion (ii): The Grand-Place is an outstanding example of the eclectic and highly successful blending of architectural and artistic styles that characterizes the culture and society of this region.

Criterion (iv): Through the nature and quality of its architecture and of its outstanding quality as a public open space, the Grand-Place illustrates in an exceptional way the evolution and achievements of a highly successful mercantile city of northern Europe at the height of its prosperity.

Antwerp (Dutch: Antwerpen, French: Anvers) is the capital of the eponymous province in the region of Flanders in Belgium. At a population of just over half a million people (2018), it is the second largest city in Belgium (after Brussels), and it has a major European port. Due to its long and culturally rich history, the city of Antwerp houses many interesting historical buildings from different historical periods, and many interesting museums. Antwerp is also known as the global diamond trade hub – more than 70% of all diamonds are traded in Antwerp. Antwerp has grown to become a trendy city, attracting many Flemish and foreign artists, writers, intellectuals, and actors. This is reflected in the city’s many trendy bars and shops. Antwerp is a city with many faces. While it may not be as historically preserved as Bruges or Ghent, it is a very dynamic city, offering a perfect mix of history and present-day modern life [read more].

Ghent (Dutch: Gent, French: Gand) is a city in East Flanders in Belgium. Ghent is a city with a population of a quarter of a million, with rich history. At the same time, Ghent has a relatively high proportion of young people, and a significant seasonal student population. During the Middle Ages, Ghent was one of the richest and most powerful cities in Europe. It was once considered the second largest city north of the Alps, after Paris. The impact of this rich past can be clearly seen when viewing the imposing architecture of churches and the houses of rich traders. The whole of the city center is restored in this fashion, and still breathes the atmosphere of a thriving late-medieval city state. As the city council made the center free of cars, it is now a very welcoming and open area, which does not fail to impress even the people who live there [read more].

Charleroi, located on the river Sambre, is the third largest municipality and fifth-largest city of Belgium situated in Hainaut province of Wallonia, the French speaking part of Belgium. A former mining town, it is viewed unfavourably by most Belgians, who often look down on Charerloi as a poor, polluted, derelict, and violent city that is not attractive at all. Nevertheless, Charleroi indeed has its share of attractions, including unique museums such as the internationally-acclaimed Museum of Photography. It played an important role in the development of the Belgian comic strip culture, and in the world of modern dance, Charleroi has also become an important place due to its yearly festival. Charleroi also sees a high share of tourist traffic among Belgian municipalities as it is the location of the low-cost “Brussels South-Charleroi airport”. While most tourists head straight from the airport to Brussels and other locations in Belgium, France and the Netherlands, the city itself is worth a go as well  [read more].