Kutná Hora: Historical Town Centre with the Church of St Barbara and the Cathedral of Our Lady at Sedlec 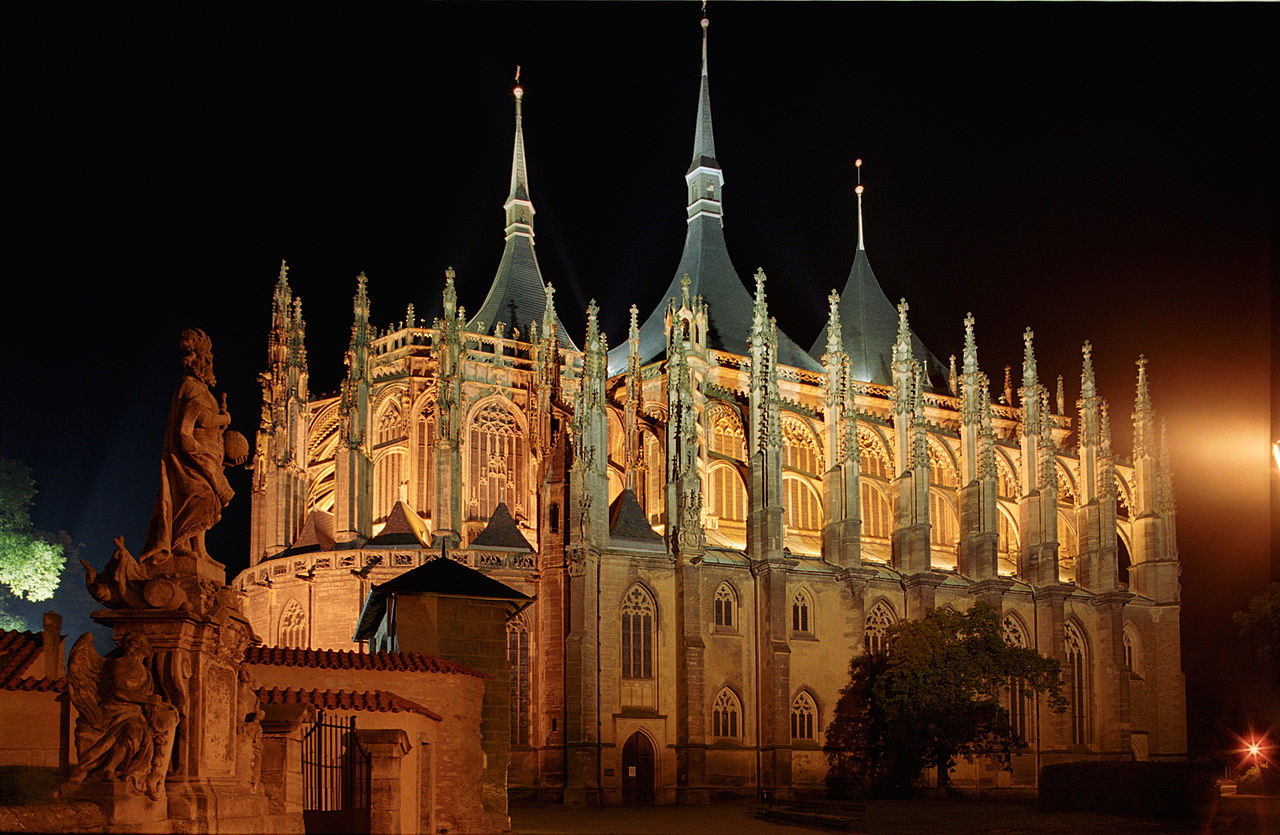 Kutná Hora developed as a result of the exploitation of the silver mines. In the 14th century it became a royal city endowed with monuments that symbolized its prosperity. The Church of St Barbara, a jewel of the late Gothic period, and the Cathedral of Our Lady at Sedlec, which was restored in line with the Baroque taste of the early 18th century, were to influence the architecture of central Europe. These masterpieces today form part of a well-preserved medieval urban fabric with some particularly fine private dwellings.

The historic town centre of Kutná Hora with the Church of St Barbara and the Church of Our Lady at Sedlec are located in Central Bohemian Region of the Czech Republic. Kutná Hora has developed as a result of the discovery and exploitation of the rich veins of silver ore since the end of the 13th century. In the 14th century, it became a royal city endowed with buildings that symbolized its enormous prosperity. The Church of St Barbara and the former Cistercian monastery church of Our Lady and St. John the Baptist in Sedlec, located at a distance of approximately 1.5 km to the north-east of the historic centre, were to influence considerably the architecture of Central Europe. Today, these masterpieces, representing cathedral architecture, form the dominants of a well-preserved medieval town-planning structure filled with Gothic and Baroque urban fabric.

The most striking of Kutná Hora is the church of Saint Barbara, the Gothic jewel whose interior is decorated with frescoes depicting the secular life of the medieval mining town of Kutná Hora. This piece of art had a major influence on the architecture of central Europe. The former Cistercian cathedral, Our Lady of Sedlec, which is at a distance of 1.5 km northeast of the historic centre, was restored in the Baroque style in the early 18th century by Jan Blazej Santini. For the first time, he used his conception of the Baroque Gothic style which strongly influenced the history of architecture.

The oldest neighbourhoods Vlassky dvur (Italian courtyard which includes the southeast tower) are dating back to the early 14th century. The royal chapel is Gothic and boasts a remarkable interior design. Attached to the Italian court, we find the church of St Jacob from the 14th century whose furniture date back mostly to the end of the Gothic period. The Hradek (little castle) is an interesting example of Gothic palazzetto of Central Europe which has kept both inside and outside in its original condition.

Throughout its extensive area, the historic centre of Kutná Hora reflects a very specific medieval structure of the city ground plan, which is determined by mining, later with only isolated partial corrections. In spite of its long dynamic development, the town retains an earlier pattern of communications predating the city’s actual origin. Moreover, the historic built-up area, formed by the finest architectural works from Gothic and Baroque periods and the specific breathtaking Kutná Hora panorama, is impressively linked to a picturesque surrounding landscape.

Criterion (ii): The urban fabric of Kutná Hora was endowed with many buildings of high architectural and artistic quality, notably the Church St Barbara, which had a profound influence on subsequent developments in the architecture of Central Europe.

Criterion (iv): The historic town centre of Kutná Hora, with the Church of St Barbara and the Church of Our Lady at Sedlec, constitutes an outstanding example of a medieval town whose wealth and prosperity was based on its silver mines.

Hradec Králové is an attractive city in East Bohemia, Czech Republic. The city is in the centre of a very fertile region called the Golden Road on the confluence of Elbe and Orlice and contains many buildings of historical and architectural interest. The cathedral was founded in 1303 by Elizabeth, and the church of St. John, built in 1710, stands on the ruins of the old castle. During the 1920s and 1930s the city grew rapidly and due to many buildings of modern architecture Hradec Králové became known as the Salon of the Republic. This was a nickname given to it by citizens who were spellbound by the unique architecture of Josef Gočár. You can explore the old centre on foot. Pretty much the whole town can be taken on by foot but there are public transport buses available if you get tired or taxis. Hradec Králové is connected by rail and a highway to Prague [read more].

Prague (Czech: Praha) is the capital and largest city of the Czech Republic. The city’s historic buildings and narrow, winding streets are testament to its centuries-old role as capital of the historic region of Bohemia. Prague lies on the banks of the beautiful, meandering Vltava River that reflects the city’s golden spires and 9th century castle that dominates the skyline. This historic atmosphere is combined with a certain quirkiness that embraces the entire city. From the Museum of Czech Cubism to the technicolour Jubilee Synagogue; the castle to the river, Prague is a Bohemian capital in every sense. Confusingly, several incompatible district systems are used in Prague. Partially, different systems are from different historic periods, but at least three different systems are used today for different purposes. To make things even worse, a single district name can be used in all the systems, but with different meanings. For purposes of this guide, the “old” district system is used [read more].

Brno (German: Brünn, Štatl in the local dialect) is the major city of Moravia (a historical region in the Czech Republic). It is the largest city in Moravia and the second largest city in the Czech Republic by population and area. It was founded around the year 1000; and since the 14th century, the city served as the capital of Moravia. Brno is the heart of Moravia and its cultural hub; it’s home to many institutions related to Moravian history and culture. At the same time, Brno represents the administrative center of the contemporary South Moravian region. It has a population of around 380,000 people, and it’s in a beautiful natural environment between South Moravian vineyards and the Moravian Karst. The city was founded about 1000 years ago, it received city status in the year 1243, and for centuries it served as the capital city of Moravia, until 1948 when communists abolished autonomy of Moravia [read more].