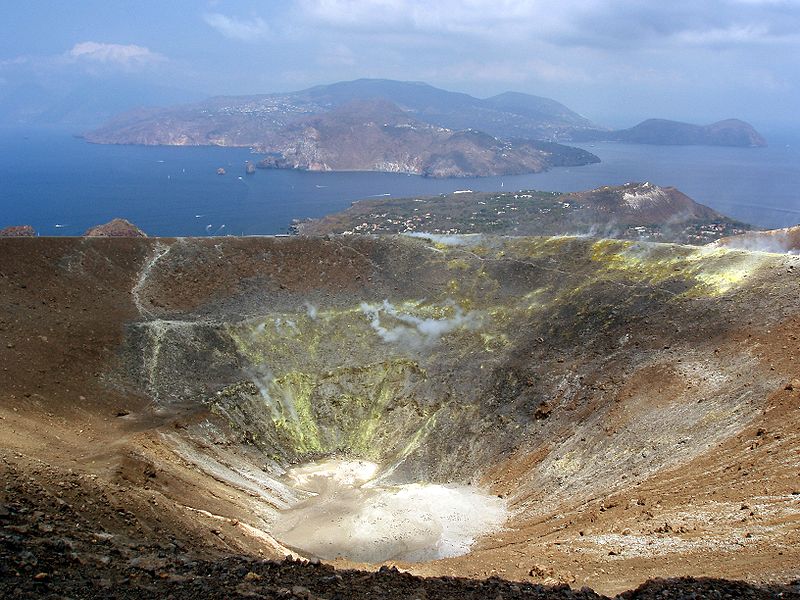 The Gran Cratere on Vulcano Island. In the background is Lípari Island (Man77/Wikipedia, CC BY-SA 3.0).

The Aeolian Islands provide an outstanding record of volcanic island-building and destruction, and ongoing volcanic phenomena. Studied since at least the 18th century, the islands have provided the science of vulcanology with examples of two types of eruption (Vulcanian and Strombolian) and thus have featured prominently in the education of geologists for more than 200 years. The site continues to enrich the field of vulcanology.

Criterion (viii): The islands’ volcanic landforms represent classic features in the continuing study of volcanology world-wide. With their scientific study from at least the 18th Century, the islands have provided two of the types of eruptions (Vulcanian and Strombolian) to vulcanology and geology textbooks and so have featured prominently in the education of all geoscientists for over 200 years. They continue to provide a rich field for volcanological studies of on-going geological processes in the development of landforms.

Barcellona Pozzo di Gotto (Sicilian: Baccialona Pizzaottu) is a town and comune of about 50,000 inhabitants in the north coast of Sicily, Italy, 40 kilometres (25 mi) from Messina towards Palermo. It belongs to the Metropolitan City of Messina. Barcellona Pozzo di Gotto lies in the plain that slopes to the north close to the lush hills and the chain of Peloritani mountains, overlooking the Gulf of Patti in the Tyrrhenian Sea on the part near the Aeolian Islands in a portion of coast between the Milazzo peninsula to the east and to the west promontory of Tindari. The most creditable hypothesis for the roots to its name lies in the domination of the Crown of Aragon (1282–1516) and then in the five hundred year history of Spanish Sicily (1516–1713), flowing together with the Kingdom of Naples under the jurisdiction of the Crown of Spain. The same analogy have identified the first conquerors from County of Aragon and County of Barcelona [read more].

Palermo (Sicilian: Palermu) is on the northern coast of the Italian island of Sicily. It is a city with a thousand years of history, beautiful Arab-Norman architecture, amazing food, and lively neighbourhoods. It is a bit scruffy around the edges, but a visit of a few days will make you want to stay for weeks. It’s the capital city of the autonomous region of Sicily and of its own province. The city’s economy is based on local government institutions, port, shipbuilding industry and the mechanical industry. It is also seat to some important Sicilian wine-making companies (like Tasca d’Almerita, Duca di Salaparuta, Corvo, and Planeta) whose popularity in the world is growing. Capital of Sicily, founded by Phoenicians under the name of Ziz (= Flower, but the meaning is still doubtful), later renamed by Greeks Panormos, which means “all port”. It reached its golden age during the Arab domination (from 9th to 11th centuries AD) when it became one of the most prosperous cities in the Mediterranean and Europe, known as “city of delights” for its marvelous and lavish gardens, as well as for magnificent mosques and palaces [read more].

Catania is a city of 310,000 people (2019) on the eastern coast of Sicily at the foot of Mount Etna, the biggest volcano in Europe. It is the second largest city in Sicily with the metropolitan area reaching one million inhabitants, a major transport hub, economic centre and a university city where you will enjoy a busy downtown and an active nightlife. Catania is also well known for its particular baroque architecture and urban design (the downtown area is a World Heritage Site, along with all the Val di Noto area), consequences of the great earthquake of 1693 after which the city had to be rebuilt, like most of eastern Sicily. The city has a history dating back 2,700 years, dominated by several different cultures (Greeks, Romans, Arabs, Normans, Spanish, etc.) and was a rich commercial centre, mainly due to its port. Again, since the 1970s, the city economy is growing as the urban area and the suburbs, making Catania a large metropolitan centre, mainly between the volcano and the sea [read more].