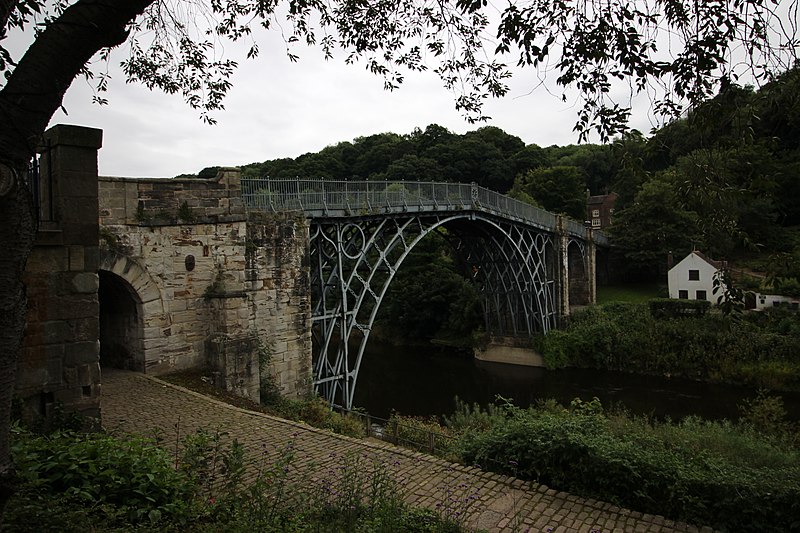 Ironbridge is known throughout the world as the symbol of the Industrial Revolution. It contains all the elements of progress that contributed to the rapid development of this industrial region in the 18th century, from the mines themselves to the railway lines. Nearby, the blast furnace of Coalbrookdale, built in 1708, is a reminder of the discovery of coke. The bridge at Ironbridge, the world’s first bridge constructed of iron, had a considerable influence on developments in the fields of technology and architecture. 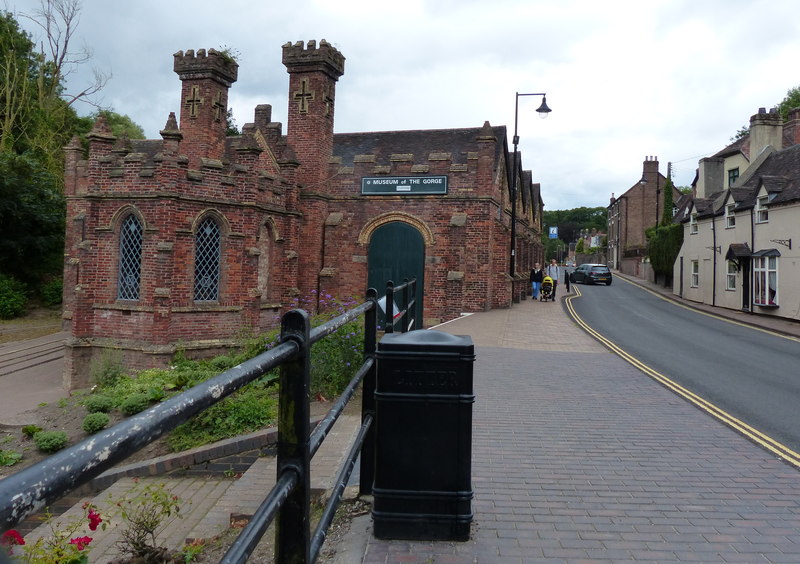 The Museum of the Gorge, originally the Severn Warehouse (Mat Fascione/geography.org.uk, CC BY-SA 2.0).

The Ironbridge Gorge World Heritage property covers an area of 5.5 km2 (550 ha) and is located in Telford, Shropshire, approximately 50 km north-west of Birmingham. The Industrial Revolution had its 18th century roots in the Ironbridge Gorge and spread worldwide leading to some of the most far-reaching changes in human history.

The site incorporates a 5 km length of the steep-sided, mineral-rich Severn Valley from a point immediately west of Ironbridge downstream to Coalport, together with two smaller river valleys extending northwards to Coalbrookdale and Madeley.

The Ironbridge Gorge provided the raw materials that revolutionised industrial processes and offers a powerful insight into the origins of the Industrial Revolution and also contains extensive evidence and remains of that period when the area was the focus of international attention from artists, engineers, and writers. The property contains substantial remains of mines, pit mounds, spoil heaps, foundries, factories, workshops, warehouses, iron masters’ and workers’ housing, public buildings, infrastructure, and transport systems, together with the traditional landscape and forests of the Severn Gorge. In addition, there also remain extensive collections of artifacts and archives relating to the individuals, processes and products that made the area so important.

Today, the site is a living, working community with a population of approximately 4000 people as well as a world renowned place to visit. It is also a historic landscape that is interpreted and made accessible through the work of a number of organisations, in particular, the Ironbridge Gorge Museum Trust (established in 1967 to preserve and interpret the remains of the Industrial Revolution within the Ironbridge Gorge) and the Severn Gorge Countryside Trust (established in 1991 to manage the woodland, grassland and associated historic structures in the Gorge).

Within the property, five features are highlighted as of particular interest. It was in Coalbrookdale in 1709 that the Quaker Abraham Darby I developed the production technique of smelting iron with coke which began the great 18th century iron revolution. There still remains a high concentration of 18th and 19th century dwellings, warehouses and public buildings in Coalbrookdale. In Ironbridge, the community draws its name from the famous Iron Bridge erected in 1779 by Abraham Darby III. At the eastern end of Ironbridge stand the remains of two 18th century blast furnaces, the Bedlam Furnaces, built in 1757. In Hay Brook Valley, south of Madeley, lies a large open-air museum which incorporates the remains of the former Blists Hill blast furnaces and Blists Hill brick and tile works. Also of importance is the spectacular Hay Inclined Plane, which connected the Shropshire Canal to the Coalport Canal, which in turn linked with the River Severn. The small community of Jackfield on the south bank of the River Severn was important for navigation, coal mining, clay production, and the manufacture of decorative tiles. Located at the eastern end of the property and on the north bank of the River Severn, industrialisation came to Coalport in the late 18th century and the area is remembered principally for the Coalport China Works.

Criterion (i): The Coalbrookdale blast furnace perpetuates in situ the creative effort of Abraham Darby I who discovered the production technique of smelting iron using coke instead of charcoal in 1709. It is a masterpiece of man’s creative genius in the same way as the Iron Bridge, which is the first known metal bridge. It was built in 1779 by Abraham Darby III from the drawings of the architect Thomas Farnolls Pritchard.

Criterion (ii): The Coalbrookdale blast furnace and the Iron Bridge exerted great influence on the development of techniques and architecture.

Criterion (vi): Ironbridge Gorge, which opens its doors to in excess of 600,000 visitors yearly, is a world renowned symbol of the 18th century Industrial Revolution.

Manchester lies at the heart of Greater Manchester, in the north west of England. The city proper has a population of around half a million, while the larger conurbation, referred to as either Greater Manchester or Manchester City Region, has over 2.7 million inhabitants. Dubbed (unofficially) “The Capital of the North”, Manchester is known for its influence on the histories of industry and music, as well as its world-renowned sporting connections. Manchester is home to the UK’s largest airport outside London. As the most visited city in England by overseas visitors aside from the capital, a multitude of shopping, cultural and entertainment facilities set out to charm travellers and students alike. Manchester is in the northwest region of England and is characterised by its friendly, approachable inhabitants. Manchester is located about equidistant between Liverpool and Leeds, which are roughly 1 hour’s travel each by road or rail from Manchester city centre. The expansion of the modern city has its roots in the 1800’s when it became the world’s first industrial city through the development of the cotton industry [read more].