Trogir is a remarkable example of urban continuity. The orthogonal street plan of this island settlement dates back to the Hellenistic period and it was embellished by successive rulers with many fine public and domestic buildings and fortifications. Its beautiful Romanesque churches are complemented by the outstanding Renaissance and Baroque buildings from the Venetian period. 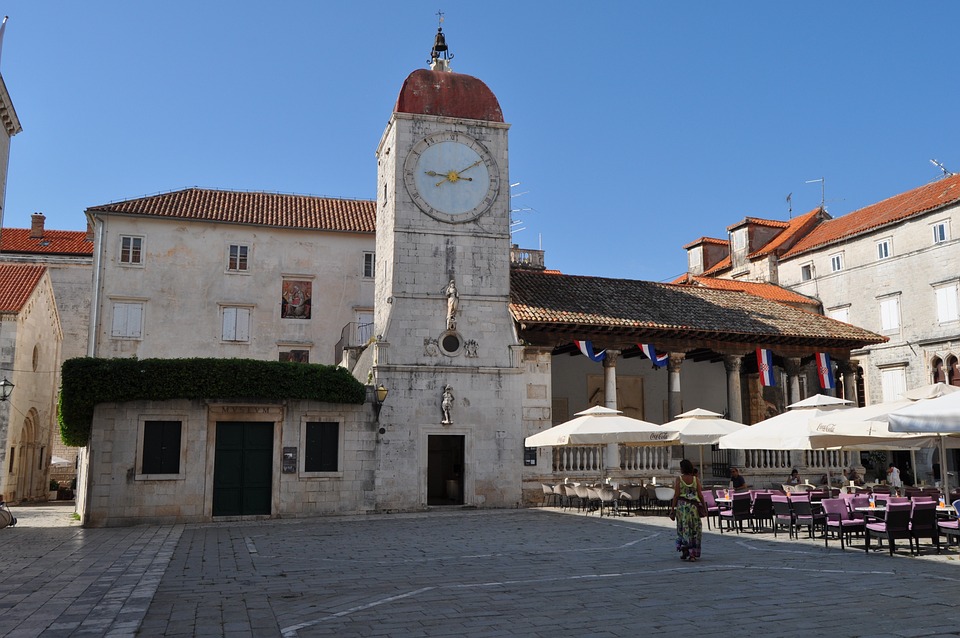 The Committee decided to inscribe this property on the basis of criteria (ii) and (iv), considering that Trogir is an excellent example of a medieval town built on and conforming with the layout of a Hellenistic and Roman city that has conserved its urban fabric to an exceptional degree and with the minimum of modern interventions, in which the trajectory of social and cultural development is clearly visible in every aspect of the townscape.

Split is a city in Central Dalmatia, Croatia, and the seat of the Split-Dalmatia county. The city was built around the Diocletian palace (a palace/fort built for the retired Roman emperor Diocletian) where the locals sought refuge centuries ago. Wandering the historic centre of Split you can still clearly see the Roman walls, squares, and temples. Because of its ideal climate, with 2,800 hours of sunlight each year, local people have a few nicknames for Split: “The most beautiful city in the world” and “Mediterranean flower”. Many famous Croatian sports people were born in Split, so locals often nicknamed their city “The sportiest city in the world”. The most popular sport institution is the football club Hajduk. Large portions of the city are painted with the club’s colors and logo. This is done by Torcida, the oldest supporters group in Europe, established in 1950. Besides the bell tower of St. Duje, the symbols of city are the Dalmatian dog and a donkey [read more].

Sibenik is a city (pop. ~37,000) in Šibenik-Knin County, in northern Dalmatia, Croatia. Šibenik is most famous for Saint James Cathedral, which is on the UNESCO World Heritage list, as are the city walls from the Venetian era. A trademark of the city is the traditional Šibenik hat, coloured orange and black, also the city’s colours. 16th-century polymath and bishop Faust Vrančić, known as one of the inventors of parachute and perhaps the first man who used it, was born here and lived here. Famous basketball player Dražen Petrović, and Maksim Mrvica, a piano player, were born here. Šibenik was mentioned for the first time under its present name in 1066 in a Charter of the Croatian King Petar Krešimir IV. For a period of time, it was a seat of the Croatian King. For that reason, Šibenik is also called “Krešimirov grad” (Krešimir’s city). It is the oldest native Croatian town on the eastern shores of the Adriatic sea [read more].

Zadar is a city in northern Dalmatia, Croatia. In 2016 Zadar won a contest for the European Best Destination. Its Venetian city walls are inscribed on the UNESCO World Heritage List. The centre is easy enough to get around on foot. To reach the bus and train stations or Youth Hostel you will probably need to catch one of the frequent local buses, which are the only form of public transportation. Walk around the atmospheric streets of the old town, located on the peninsula. There are 34 old churches on the peninsula, and all of them with a very rich history. The oldest is St. Simeon. Crkva svetog Donata (Church of Saint Donatus). The church is one of the best preserved pre-Romanesque buildings in the world. It is pretty difficult to miss, as it has become the most recognizable symbol of Zadar. The church is no longer in use for religious ceremonies, and today is a museum [read more].