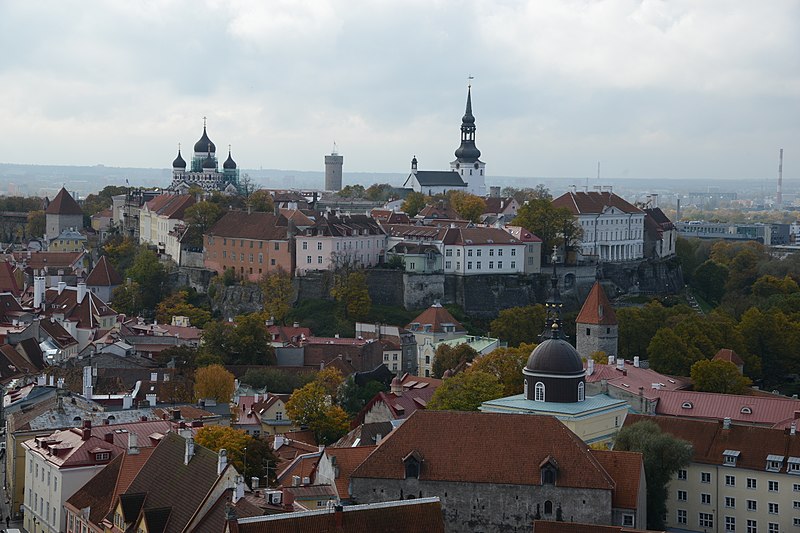 The origins of Tallinn date back to the 13th century, when a castle was built there by the crusading knights of the Teutonic Order. It developed as a major centre of the Hanseatic League, and its wealth is demonstrated by the opulence of the public buildings (the churches in particular) and the domestic architecture of the merchants’ houses, which have survived to a remarkable degree despite the ravages of fire and war in the intervening centuries.

The Historic Centre (Old Town) of Tallinn is an exceptionally complete and well-preserved medieval northern European trading city on the coast of the Baltic Sea. The city developed as a significant centre of the Hanseatic League during the major period of activity of this great trading organization in the 13th-16th centuries.

The combination of the upper town on the high limestone hill and the lower town at its foot with many church spires forms an expressive skyline that is visible from a great distance both from land and sea.

The upper town (Toompea) with the castle and the cathedral has always been the administrative centre of the country, whereas the lower town preserves to a remarkable extent the medieval urban fabric of narrow winding streets, many of which retain their medieval names, and fine public and burgher buildings, including town wall, Town Hall, pharmacy, churches, monasteries, merchants’ and craftsmen’ guilds, and the domestic architecture of the merchants’ houses, which have survived to a remarkable degree. The distribution of building plots survives virtually intact from the 13th-14th centuries.

The Outstanding Universal Value of the Historic Centre (Old Town) of Tallinn is demonstrated in its existence as an outstanding, exceptionally complete and well preserved example of a medieval northern European trading city that retains the salient features of this unique form of economic and social community to a remarkable degree.

Criterion (ii): The Historic Centre of Tallinn, among the most remote and powerful outposts of the colonizing activities of the Hanseatic League in the north-eastern part of Europe in the 13th-16th centuries, provided a crucible within which an international secular-ecclesiastical culture resulting from the interchange of Cistercians, Dominicans, the Teutonic Order and the traditions of the Hanseatic League, formed and was itself exported throughout northern Europe.

Criterion (iv): The town plan and the buildings within it constitute a remarkable reflection of the coexistence of the seat of feudal overlords and a Hanseatic trading centre within the shelter of a common system of walls and fortifications.

Tallinn is Estonia’s capital and largest city, located at the Gulf of Finland. A city of over 400,000 inhabitants, it is home to a third of the country’s population, and besides serving as the national capital, it is also the capital of Harju County in Northern Estonia. Tallinn has been and continues to be an important port of the Baltic Sea, with the busy passenger section of the port reaching the foothill of the picturesque medieval Old Town, which has been astonishingly well preserved and was inscribed on the UNESCO World Heritage List in 1997. In a striking contrast, the immediate outskirts thereof are filled with a cluster of modern office towers, with intermittent architectural monuments to the Soviet era. Further out, you will find a bewildering variety of historic and modern neighbourhoods, religious, civic, industrial and maritime heritage. [read more]

Rakvere (Tarbapea in ancient Estonian, Weisenberg in German, Rakowor in Russian) is Estonia’s fifth largest city and situated the northern part of the country, 20 km south of the Gulf of Finland and approximately 100 km east of Tallinn, Estonia. Its earliest signs of human settlement date back to the 3rd-5th century. Nowadays, Rakvere is an attractive and rapidly developing town with quite an interesting character. The modern Rakvere perfectly reflects the phenomenon of the Estonian province: with visible lowliness and calm, a turbulent cultural life flows here. Every day there is a play or a movie in the theatre, there are a lot of cafés and restaurants in the city, and the architecture is diverse and quite original. Rakvere is the place where the first Estonian Punk Song Festival took place. It’s also the host to the well-known international rock music festival “Green Christmas.” [read more]

Tartu (formerly known as Dorpat or Yuryev) is the second largest city in Estonia with a population of 100,000. Tartu is a Hanseatic city and a university town. It is the oldest city in Estonia, dating back to 1030. Tartu is 185 km south-east of Tallinn, the capital of Estonia. The Emajõgi River, which connects the two largest lakes of Estonia, flows for 10 km within the city limits. Since Tartu is a student town, English is widely understood. As usual, the older people are more likely to only speak Estonian and Russian; however most can understand English if you speak clearly. Tartu’s Old Town is navigable by foot, but if you want to go out of Old Town, there’s public transportation. During the last decade, Tartu has seen several interesting pieces of modern architecture being built. [read more]