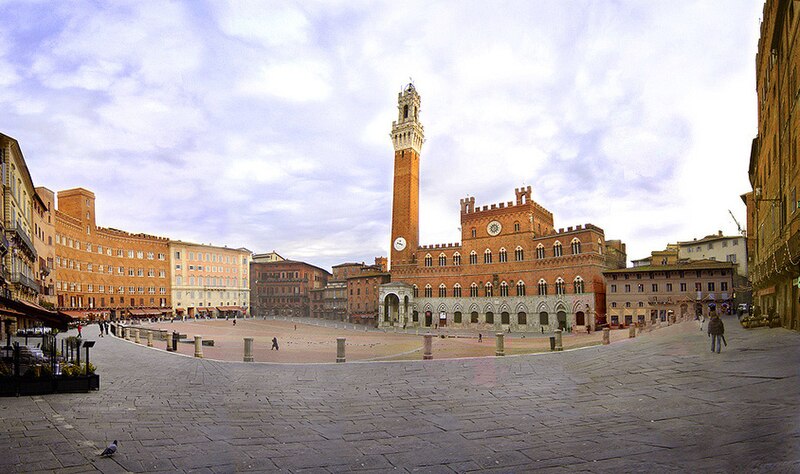 Siena is the embodiment of a medieval city. Its inhabitants pursued their rivalry with Florence right into the area of urban planning. Throughout the centuries, they preserved their city’s Gothic appearance, acquired between the 12th and 15th centuries. During this period the work of Duccio, the Lorenzetti brothers and Simone Martini was to influence the course of Italian and, more broadly, European art. The whole city of Siena, built around the Piazza del Campo, was devised as a work of art that blends into the surrounding landscape. 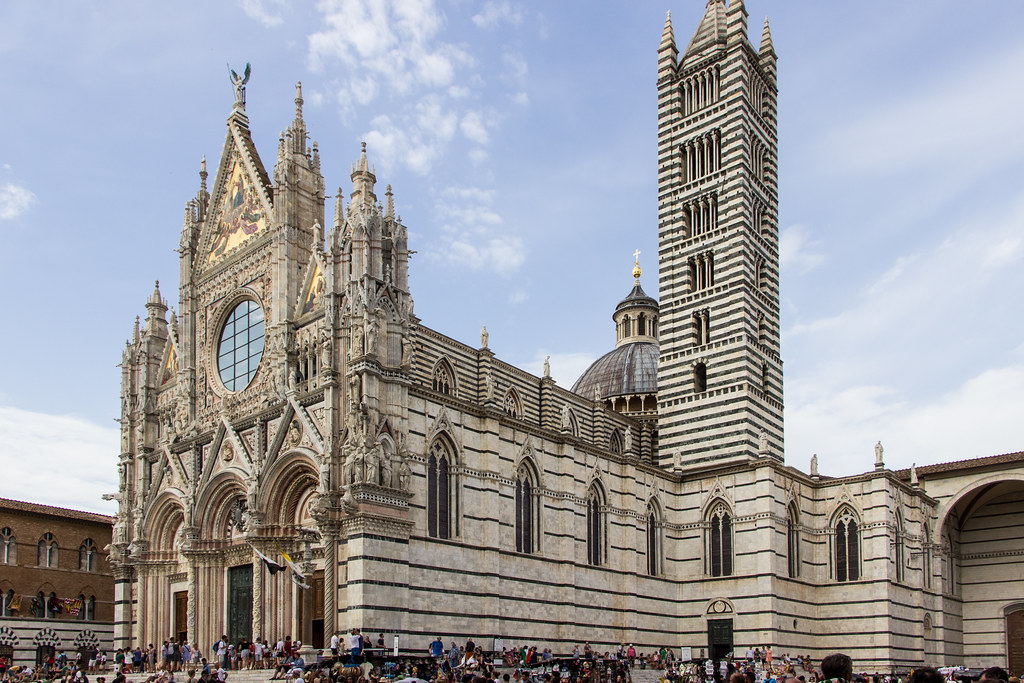 The Historic Centre of Siena is the embodiment of a medieval city. Historically, its inhabitants pursued their competition with the neighbouring cities of Florence and Pisa right into the area of urban planning. Throughout the centuries, the city has preserved its Gothic appearance acquired between the 12th and 15th centuries. During this period, the work of Duccio, the Lorenzetti brothers and Simone Martini influenced the course of Italian and, more broadly, European art. The whole city of Siena was devised as a work of art that blends into the surrounding landscape.

This Tuscan city developed on three hills connected by three major streets forming a Y-shape and intersecting in a valley that became the Piazza del Campo. The seven-kilometre long fortified wall still surrounds the 170-hectare site. Protected gates were doubled at strategic points, such as the Porta Camollia on the road to Florence. To the west, the walls embrace the Fort of Santa Barbara that was rebuilt by the Medici in 1560 and finished in 1580. Inside the walls towerhouses, palaces, churches and other religious structures survive. Also of note are the city’s fountains that continue to be fed by an extensive system of original tunnels.

Siena’s distinctive Gothic style is illustrated by the quintessential Sienese arch, introduced to the city from the East during the Crusades. The arch dominated later building styles including the Renaissance era. Even when buildings underwent major renovations in the 17th, 18th and 19th centuries (such as the Town Hall, the Chigi-Saracini Palace, and the Marsili Palace respectively), Gothic elements had preference.

Siena is an outstanding medieval city that has preserved its character and quality to a remarkable degree. The city had substantial influence on art, architecture and town planning during the Middle Ages, both in Italy and elsewhere in Europe. The city is a masterwork of dedication and inventiveness in which the buildings have been designed to fit into the overall planned urban fabric and also to form a whole with the surrounding cultural landscape.

Criterion (i): Through its urban and architectural characteristics, the historic centre of Siena is a testimony to human creativity and expresses human artistic and aesthetic capacity in material form.

Criterion (ii): The strong, personal example of artistic civilization, its architecture, painting, sculpture and town planning in particular had a very strong cultural influence not merely on the whole territory of the Republic of Siena but also in Italy and Europe, especially between the 13th and 17th centuries.

Criterion (iv): The structure of the town and its evolution, uninterrupted over the centuries, along with a unity of design that has been preserved, has made Siena one of the most precious examples of the medieval and Renaissance Italian town.

Florence (Italian: Firenze) is the capital of the region of Tuscany in Italy, with a population of about 366,500. The city is a cultural, artistic and architectural gem, and is inscribed on the UNESCO World Heritage list. The birthplace of the Italian Renaissance, Florence was the home to powerful families, creative geniuses and scientific masterminds who left their legacies in the city’s many museums and art galleries. The city also has a very rich literary history, being the birthplace of the famous poet Dante, and standard Italian today is primarily based on the dialect of Tuscan spoken in Florence. Politically, economically, and culturally, Florence was the most important city in Europe for around 250 years, from some time before 1300 until the early 1500s. Florentines reinvented money, in the form of the gold florin. This currency was the engine that drove Europe out of the Dark Ages, a term invented by Petrarch, a Florentine whose family had been exiled to Arezzo [read more].

Prato is a city of 186,710 inhabitants in Tuscany, immediately to the west of Florence, and also the capital of the Province of Prato since 1992. The city is famous in Italy and beyond for textile production and for the famous biscotto di Prato (biscuit with almonds better known as “cantuccio”). In the last few decades, Prato has enjoyed a significant population boom and increased immigration. It is now the second largest city in Tuscany, third largest in central Italy (after Rome and Florence) and the eighteenth largest in Italy. Prato is the low-profile cousin of Florence and Pisa in the Central Italy region of Tuscany. Not as mobbed with tourists and without the typical tourist ripoffs it nonetheless has a history and artistic heritage dating back to the Etruscan civilisation and everything since, plus great food. It’s a great place to stay and save a few euros while doing day trips to Pisa or Florence [read more].