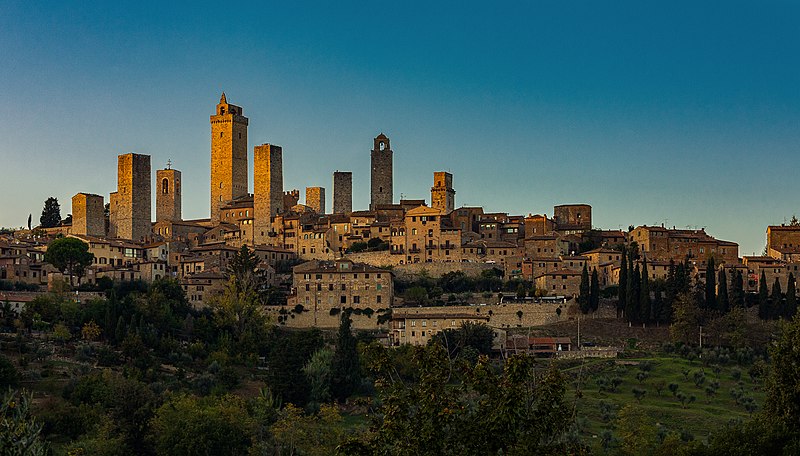 ‘San Gimignano delle belle Torri’ is in Tuscany, 56 km south of Florence. It served as an important relay point for pilgrims travelling to or from Rome on the Via Francigena. The patrician families who controlled the town built around 72 tower-houses (some as high as 50 m) as symbols of their wealth and power. Although only 14 have survived, San Gimignano has retained its feudal atmosphere and appearance. The town also has several masterpieces of 14th- and 15th-century Italian art.

The Historic Centre of San Gimignano sits on a height of land, dominating the surrounding landscape. During the Middle Ages, its location in Val d’Elsa, 56 km south of Florence, provided an important relay point for pilgrims travelling to or from Rome on the Via Francigena. The town became independent in 1199 and between the 11th and the 13th century the noble families and upper middle-class merchants who controlled the free town built many fortified tower houses (probably 72) as symbols of their wealth and power. The town grew around two principal squares: the triangular Piazza della Cisterna, ornamented with a lovely central well, and the Piazza Duomo, dating from the late 13th century with its more intricate layout containing the majority of public and private monuments. After 1353, the town went into a period of decline due to waves of famine and plague that caused a drastic decrease in population. Within a hundred years, the town was downgraded to the level of the other lands under the Florentine control. This status, however, prevented the town from the urban renewal that transformed many Italian historical towns after the Middle Ages.

While only 14 of the original tower houses have survived, San Gimignano has retained its feudal atmosphere and appearance, embellished with several notable palaces during the 12th and 14th century. The town also has several masterpieces of Italian art dating to the 14th and 15th centuries. These are found in the cathedral as well as in other prominent religious and public buildings.

The Historic Centre of San Gimignano is a cultural site of exceptional value, since it has treasured its architectural homogeneity and its original urban layout. The buildings within the town’s double wall provide a shining example of medieval architecture with influences of Florentine, Sienese, and Pisan styles from the 12th to the 14th century.

Criterion (i): The Historic Centre of San Gimignano contains a series of masterpieces of 14th and 15th century Italian art in their original architectural settings, including: in the Cathedral, the fresco of The Last Judgment, Heaven and Hell by Taddeo di Bartolo (1393), The Martyrdom of St. Sebastian by Benozzo Gozzoli (1465) and above all the magnificent frescoes by Domenico Ghirlandaio such as the cycle of Santa Fina (1475) and the Annunciation in the Baptistery (1482). Other works of the same outstanding beauty include the huge frescoes by Benozzo Gozzoli depicting St. Sebastian (1464) and St. Augustine (1465).

Criterion (iii): San Gimignano bears exceptional testimony to medieval civilization since it groups together within a small area all the structures typical of urban life: squares and streets, houses and palaces, as well as wells and fountains. The frescoes by Memmo di Filippuccio commissioned by the township in 1303 to decorate the chambers of the Podestà in the Palazzo del Popolo are among the most frequently reproduced documents used to illustrate daily life of the early 14th century, down to its most domestic details.

Criterion (iv): The urban landscape of Florence, dominated by the towers of its public palazzos (Palazzo del Podestà and Palazzo della Signoria), shows that its public institutions prevailed over personal power. After 1250, the height of family tower houses was periodically reduced in the city. Whereas in San Gimignano, whose incastellamento goes back to 998, the 14 towers proudly rising above its palaces, preserve the look of a feudal Tuscan town controlled by rival factions ever ready for conflict. It illustrates a significant moment in history which cannot be found to the same extent in Florence, Sienna or Bologna despite the quality of their monuments.

Prato is a city of 186,710 inhabitants in Tuscany, immediately to the west of Florence, and also the capital of the Province of Prato since 1992. The city is famous in Italy and beyond for textile production and for the famous biscotto di Prato (biscuit with almonds better known as “cantuccio”). In the last few decades, Prato has enjoyed a significant population boom and increased immigration. It is now the second largest city in Tuscany, third largest in central Italy (after Rome and Florence) and the eighteenth largest in Italy. Prato is the low-profile cousin of Florence and Pisa in the Central Italy region of Tuscany. Not as mobbed with tourists and without the typical tourist ripoffs it nonetheless has a history and artistic heritage dating back to the Etruscan civilisation and everything since, plus great food. It’s a great place to stay and save a few euros while doing day trips to Pisa or Florence [read more].

Genoa (Italian: Genova, Ligurian: Zena) is a historic port city in northern Italy, the capital of the Liguria region. As a tourist attraction, is often overshadowed by cities such as Rome or Venice, even though it has a long history as a rich and powerful trade centre. However, with its multitude of hidden gems behind cozy alleyways, excellent cuisine (notably fish and seafood), renovated old port, beautiful sights (including one of Europe’s biggest aquariums), and its position as the European Capital of Culture in 2004, the birthplace of explorer Christopher Columbus (Cristoforo Colombo) is an enticing place which is gradually becoming more included in the touristic market. With unusual typical slate-roofed houses, artistic churches, lovely seaside villas, and several luxurious boutiques, Genoa is a must-see if you want to experience the quintessential Italy. The busy city port, filled to the brim with yachts, boats, cruises, ferries and cargo ships. Genoa is a very important sea town in the Mediterranean [read more].