Riga was a major centre of the Hanseatic League, deriving its prosperity in the 13th–15th centuries from the trade with central and eastern Europe. The urban fabric of its medieval centre reflects this prosperity, though most of the earliest buildings were destroyed by fire or war. Riga became an important economic centre in the 19th century, when the suburbs surrounding the medieval town were laid out, first with imposing wooden buildings in neoclassical style and then in Jugendstil . It is generally recognized that Riga has the finest collection of art nouveau buildings in Europe. 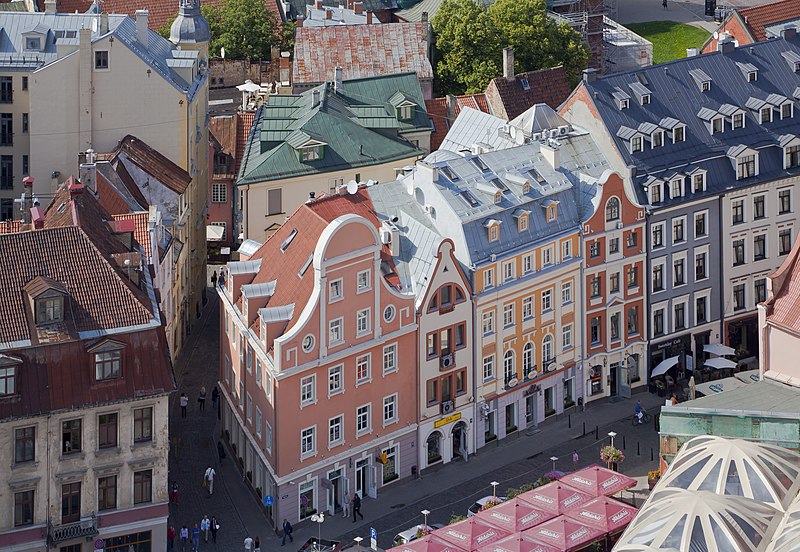 The Historic Centre of Riga is a living illustration of European history. Through centuries, Riga has been the centre of many historic events and a meeting point for European nations, and it has managed to preserve evidence of European influence on its historical development, borders between the West and the East, and intersection of trading and cultural routes. Riga has always been a modern city keeping up with the current trends in architecture and urban planning, and at the same time, preserving the city’s integrity in the course of development.

Riga, which was founded as a port town in 1201, was one of the key centres of the Hanseatic League in Eastern Europe from the 13th to the 15th century. The urban fabric of its medieval core reflects the prosperity of those times, though most of the earliest buildings were rebuilt for actual needs or lost by fire or war. In the 17th century, Riga became the largest provincial town of Sweden. In the 19th century, it experienced rapid industrial development. It is in this period that the suburbs surrounding the medieval town were laid out, first, with imposing wooden buildings in neoclassical style, and later, when permanent stone buildings were allowed instead, in the Art Nouveau style. In the early 1900’s Riga became the European city with the highest concentration of Art Nouveau architecture with around 50 Art Nouveau buildings of high architectural value in the medieval part and more than 300 in the rest of the Historic Centre. The site reflects various architectural styles, which provide valuable insight into the stages of development of Riga as a city. The Historic Centre of Riga is comprised of three different urban landscapes – the relatively well-preserved medieval core, the 19th century semi-circle of boulevards with a green belt on both sides of the City Canal, and the former suburban quarters surrounding the boulevards with dense built-up areas with a rectangular network of streets and wooden architecture of the 18th and 19th centuries. Each of these parts has its characteristic relationship of buildings and public outdoor spaces.

The Outstanding Universal Value to be preserved also resides in the spacious panorama of the Historic Centre of Riga with an expressive skyline. The medieval core of Riga is located on the right bank of the River Daugava, allowing a picturesque view on the skyline saturated with numerous church towers from the different perspectives of the left bank. Historic buildings are relatively low, with only church towers creating vertical dominance.

Riga always has had a role in the cultural, scientific, social, artistic, industrial and educational development of the region, being one of the biggest harbour cities and trade centres in the Baltic Sea Region, and thus, providing the exchange of the achievements of Western and Eastern civilizations. Riga Polytechnic, being the only higher architecture education institution until World War I in the Baltic States, promoted the dissemination of the patterns of its own architecture to Tallinn, Vilnius and other towns of the western part of Tsarist Russia.

Criterion (ii): Riga has exerted considerable influence within the cultural area of the Baltic Sea on the developments in architecture, monumental sculpture and garden design.

Riga is the financial, creative, and cultural center of Latvia. It is the capital and the largest city in Latvia, it is also the largest city in the Baltic States. The city lies on the Gulf of Riga, at the mouth of Daugava, Riga has an population of approximately 640,000 inhabitants, or 1/3 of the population of Latvia. The city was part of many empires throughout history, each of which has left its mark on the city. It is famous for Art Nouveau and wooden architecture. Riga’s historical center is listed as a UNESCO World Heritage site. There are many administrative districts in Riga [read more].

Jelgava (German: Mitau) is a city in Latvia about 41 km southwest of Riga. It is useful to understand that although from 1940 to 1991 Latvia was a constituent republic of the USSR, the official language is Latvian. However, a significant minority (up to 40% nationwide and possibly just over 50% in the capital Riga) is Russian-speaking. The majority of ethnic Latvians living in the city, not only those old enough to have attended school during Soviet times, can also speak and understand Russian. However, many prefer to converse in Latvian. English and also German are widely understood at places regularly visited by tourists and foreigners but you may be out of luck when leaving the city centre or visiting places off the beaten track [read more].

Daugavpils is the second largest city in Latvia, after Riga. It is a delightfully charming, spacious, green city. Despite its quaint atmosphere and low prices, the city offers modern conveniences and services. An ice-hall, bowling center and modern hotels have been built and diverse entertainment options have appeared throughout the city. The city was first mentioned in 1275, when the Order of Life built a castle, the Dünaburg, on the Daugava River. The present location of the city originated in the 16th century 20 km away from the original settlement, which was destroyed. In 1582, Dünaburg received the city rights. Latgale belonged to the Polish-Lithuanian empire back then [read more].