The people of the Netherlands established a trading settlement at a fine natural harbour on the Caribbean island of Curaçao in 1634. The town developed continuously over the following centuries. The modern town consists of several distinct historic districts whose architecture reflects not only European urban-planning concepts but also styles from the Netherlands and from the Spanish and Portuguese colonial towns with which Willemstad engaged in trade. 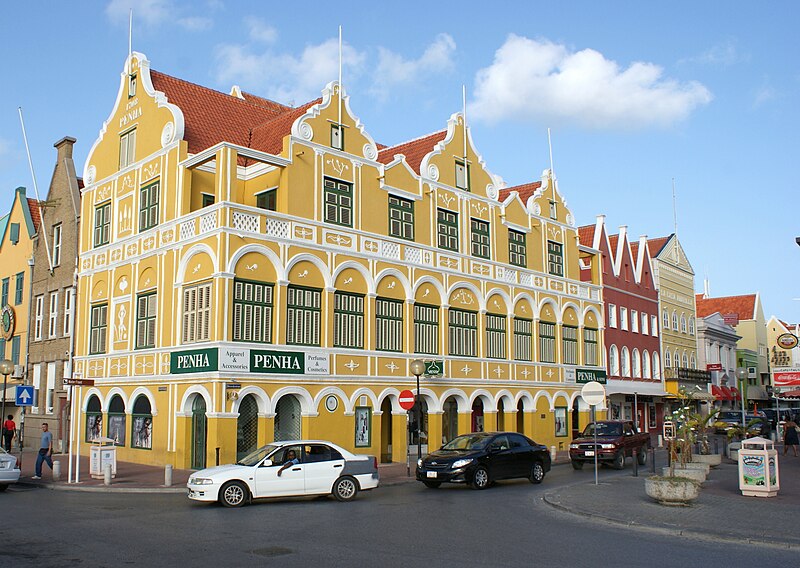 The Historic Area of Willemstad is an example of a colonial trading and administrative settlement. It was established by the Dutch on the island of Curaçao, situated in the southern Caribbean, near the tip of South America. Starting with the construction of Fort Amsterdam in 1634 on the eastern bank of Sint Anna Bay, the town developed continuously over the following centuries.

The modern town, the capital of the island nation of Curaçao, consists of several distinct historic districts, reflecting different eras of colonial town planning and development. Punda, the oldest part of the city, was built in the 17th century on the eastern side of Sint Anna Bay, adjacent to Fort Amsterdam and is the only part of the city that had a defence system consisting of walls and ramparts. The other three historic urban districts (Pietermaai, Otrobanda and Scharloo) date from the 18th century. Water Fort and Rif Fort, also included in the inscribed property, were built in the late 1820s as part of a more extensive series of fortifications. In the midst of the historic area is a natural deep-water harbour. The entire property encompasses 86 ha and is surrounded by a 87 ha buffer zone.

The architecture of Willemstad has been influenced not only by Dutch colonial concepts but also by the tropical climate and architectural styles from towns throughout the Caribbean region, with which the settlement engaged in trade. Early residences constructed in Punda followed Dutch urban design. In the 18th century, local materials and craftsmanship as well as new architectural elements, such as galleries, began to appear. As the city expanded beyond Punda, the architectural style of the residences evolved. For example, the development of Otrobanda was not restricted by ramparts and houses were built on spacious lots and resembled plantation houses surrounded by galleries. Moreover, the social and cultural differences from Afro-American, Iberian and Caribbean inhabitants have contributed to enriching the building traditions as well as the city’s cultural life. The result is a European architectural style with regional adaptations in a rich array of Caribbean colours. The colourful buildings of Willemstad are a local tradition dating from 1817, when the previous style of white lime finish on a building exterior was prohibited, apparently to protect eyesight from the glare. Predominant colours are red, blue, yellow ochre and various shades of green.

Willemstad is an exceptionally well preserved example of a Dutch colonial trading settlement. Due to the interchange of cultures, it shares a common cultural history with other counterpart cities in the Caribbean region, which is a very particular aspect of the property. The unique setting in a natural harbour qualifies the Historic Area of Willemstad as a rare example of a historic port town laid out in a setting of natural waters.

Criterion (ii): The Historic Area of Willemstad is a colonial ensemble in the Caribbean, which illustrates the organic growth of a multicultural community over three centuries. It also represents a remarkable historic port town in the Caribbean in the period of Dutch expansion with significant town planning and architectural qualities.

Criterion (iv): The four historic urban districts of Historic Willemstad show the subsequent stages of historical development over the course of centuries of the city. The city can be easily read and used as a textbook for its historical and cultural development.

Criterion (v): The historical urban fabric and the historical architecture are based on examples of European traditions that are transferred to the New World. Influences of the Americas and Africa and cultural elements of the region transformed the European elements into a typical Caribbean development.

Willemstad is the capital and largest city of Curaçao. The city center and the waterfront is inscribed on the UNESCO World Heritage List. Willemstad is mostly a destination for cruise ship tourists who usually spend one, max. two days there. Prices in bars, restaurants and shops tend to be very high and the originality and quality of products sold is often questionable – especially in the main tourist district Punda. But by comparing prices and using happy hours (usually 1h per bar, sometimes between 4pm and 8pm) costs can be reduced considerably. Cocaine and cannabis is offered to tourists pretty openly… [read more]

Kralendijk. Bonaire is a Caribbean island just north of Venezuela, politically part of the Netherlands. Along with its neighboring Dutch islands of Aruba and Curaçao, it forms the ABC Islands, though it is much quieter. It is a mostly flat, riverless coral island renowned for diving, windsurfing, and bird watching (particularly flamingos). Lacking many sandy beaches – it instead has lush coral reefs – it is less visited by cruise ships. Bonaire has world-class shore diving, much of it easy, and is thus well-suited for beginners, or for experienced divers who want relaxing independent diving. [read more]

Oranjestad is the capital and largest city of Aruba. Oranjestad has hundreds of local stores that sell tourist keepsakes. The city also is home to some of the island’s local residents and also many governmental buildings. Along the main “drag” (Sasakiweg street) you will find most tourist walking around and shopping and can also see the cruise ships that bring more and more external tourism into the island everyday. Close to the cruise ships is the island’s largest marina that provides docking space for sailboats and yachts. Beautiful…. This word alone expresses the weather one will experience in Aruba and… [read more]