Göreme National Park and the Rock Sites of Cappadocia

In a spectacular landscape, entirely sculpted by erosion, the Göreme valley and its surroundings contain rock-hewn sanctuaries that provide unique evidence of Byzantine art in the post-Iconoclastic period. Dwellings, troglodyte villages and underground towns – the remains of a traditional human habitat dating back to the 4th century – can also be seen there. 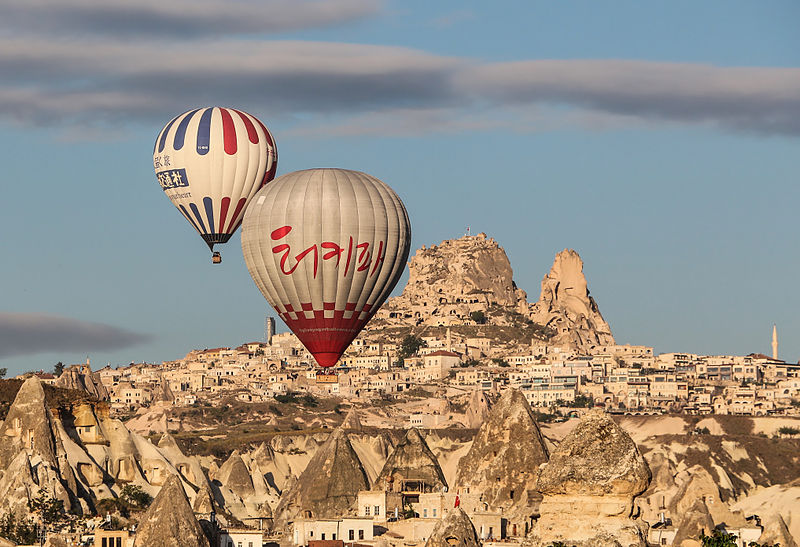 Located on the central Anatolia plateau within a volcanic landscape sculpted by erosion to form a succession of mountain ridges, valleys and pinnacles known as “fairy chimneys” or hoodoos, Göreme National Park and the Rock Sites of Cappadocia cover the region between the cities of Nevşehir, Ürgüp and Avanos, the sites of Karain, Karlık, Yeşilöz, Soğanlı and the subterranean cities of Kaymaklı and Derinkuyu. The area is bounded on the south and east by ranges of extinct volcanoes with Erciyes Dağ (3916 m) at one end and Hasan Dağ (3253 m) at the other. The density of its rock-hewn cells, churches, troglodyte villages and subterranean cities within the rock formations make it one of the world’s most striking and largest cave-dwelling complexes. Though interesting from a geological and ethnological point of view, the incomparable beauty of the decor of the Christian sanctuaries makes Cappadocia one of the leading examples of the post-iconoclastic Byzantine art period.

It is believed that the first signs of monastic activity in Cappadocia date back to the 4th century at which time small anchorite communities, acting on the teachings of Basileios the Great, Bishop of Kayseri, began inhabiting cells hewn in the rock. In later periods, in order to resist Arab invasions, they began banding together into troglodyte villages or subterranean towns such as Kaymakli or Derinkuyu which served as places of refuge.

Cappadocian monasticism was already well established in the iconoclastic period (725-842) as illustrated by the decoration of many sanctuaries which kept a strict minimum of symbols (most often sculpted or tempera painted crosses). However, after 842 many rupestral churches were dug in Cappadocia and richly decorated with brightly coloured figurative painting. Those in the Göreme Valley include Tokalı Kilise and El Nazar Kilise (10th century), St. Barbara Kilise and Saklı Kilise (11th century) and Elmalı Kilise and Karanlık Kilise (end of the 12th – beginning of the 13th century).

Criterion (i): Owing to their quality and density, the rupestral sanctuaries of Cappadocia constitute a unique artistic achievement offering irreplaceable testimony to the post-iconoclastic Byzantine art period.

Criterion (iii): The rupestral dwellings, villages, convents and churches retain the fossilized image of a province of the Byzantine Empire between the 4th century and the arrival of the Seljuk Turks (1071). Thus, they are the essential vestiges of a civilization which has disappeared.

Criterion (v): Cappadocia is an outstanding example of a traditional human settlement which has become vulnerable under the combined effects of natural erosion and, more recently, tourism.

Criterion (vii): In a spectacular landscape dramatically demonstrating erosional forces, the Göreme Valley and its surroundings provide a globally renowned and accessible display of hoodoo landforms and other erosional features, which are of great beauty, and which interact with the cultural elements of the landscape.

Kayseri is a city in the Turkish region of Central Anatolia. Kayseri is an old and large city with a strong economy. It carries lots of monuments from the days of Seljuks and Ottomans, and is also the home town of the most accomplished architect Mimar Sinan. Population has been steadily increasing and nowadays is around 950,000 in the urban center. Kayseri was also on the Silk Route and Karatay and Sultanhanı posts on this route reside in Bünyan town’s borders. Bünyan is also famous for its carpets which makes Kayseri a popular purchase-stop for tourists visiting Cappadocia. [read more]

Aksaray is a city in Central Anatolia, close to the edge of what might be called the Greater Cappadocia area (the core of which lies more than an hour drive to east). Get in Aksaray is connected to all big cities of the country by bus. [read more]

Adana lies a fair distance away from the Mediterranean coast, in the centre of huge Cilician Plains and on the banks of Seyhan River, Adana is the fifth most populous city in Turkey with a population of over 1.5 million. It’s not much known as a tourism destination, though, especially when compared with its southern and western neighbours. There are sites of interest in the surrounding countryside. Modern Adana consists of two quite separate sections: cramped old city centre and newer, mostly high-rise suburbs overlooking the Seyhan dam to north of the old centre, usually called Kuzey Adana or Yeni Adana. [read more]