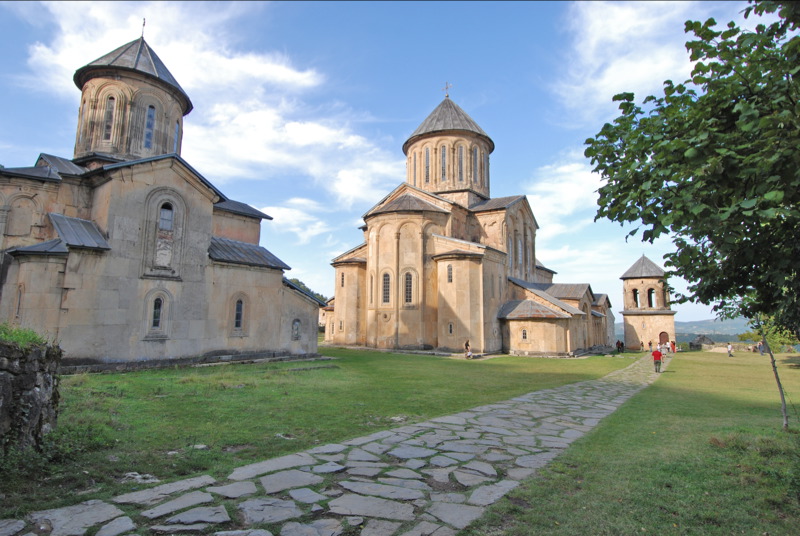 Founded in 1106 in the west of Georgia, the Monastery of Gelati is a masterpiece of the Golden Age of medieval Georgia, a period of political strength and economic growth between the 11th and 13th centuries. It is characterized by the facades of smoothly hewn large blocks, balanced proportions and blind arches for exterior decoration. The Gelati monastery, one of the largest medieval Orthodox monasteries, was also a centre of science and education and the Academy it housed was one of the most important centres of culture in ancient Georgia. 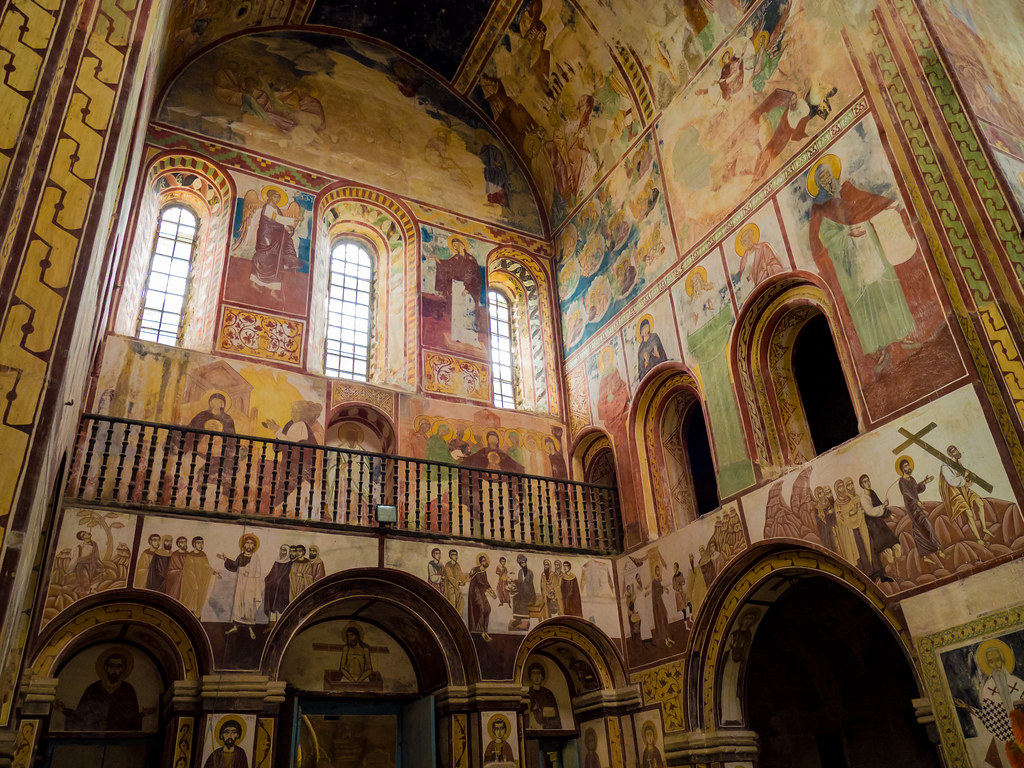 On the lower southern slopes of the mountains of the Northern Caucasus, Gelati Monastery reflects the ‘golden age’ of medieval Georgia, a period of political strength and economic growth between the reigns of King David IV ‘the Builder’ (1089-1125) and Queen Tamar (1184-1213). It was David who, in 1106 began building the monastery near his capital Kutaisi on a wooded hill above the river Tskaltsitela. The main church was completed in 1130 in the reign of his son and successor Demetré. Further churches were added to the monastery throughout the 13th and early 14th centuries. The monastery is richly decorated with mural paintings from the 12th to 17th centuries, as well as a 12th century mosaic in the apse of the main church, depicting the Virgin with Child flanked by archangels. Its high architectural quality, outstanding decoration, size, and clear spatial quality combine to offer a vivid expression of the artistic idiom of the architecture of the Georgian “Golden Age” and its almost completely intact surroundings allow an understanding of the intended fusion between architecture and landscape.

Gelati was not simply a monastery: it was also a centre of science and education, and the Academy established there was one of the most important centres of culture in ancient Georgia. King David gathered eminent intellectuals to his Academy such as Johannes Petritzi, a Neo-Platonic philosopher best known for his translations of Proclus, and Arsen Ikaltoeli, a learned monk, whose translations of doctrinal and polemical works were compiled into his Dogmatikon, or book of teachings, influenced by Aristotelianism. Gelati also had a scriptorium were monastic scribes copied manuscripts (although its location is not known). Among several books created there, the best known is an amply illuminated 12th century gospel, housed in the National Centre of Manuscripts.

As a royal monastery, Gelati possessed extensive lands and was richly endowed with icons, including the well-known gold mounted Icon of the Virgin of Khakhuli (now housed in the Georgian National Museum) and at its peak, it reflected the power and high culture of Eastern Christianity.

Criterion (iv): Gelati Monastery is the masterpiece of the architecture of the “Golden Age” of Georgia and the best representative of its architectural style, characterized by the full facing of smoothly hewn large blocks, perfectly balanced proportions, and the exterior decoration of blind arches. The main church of the monastery is one of the most important examples of the cross-in-square architectural type that had a crucial role in the East Christian church architecture from the 7th century onwards. Gelati is one of the largest Medieval Orthodox monasteries, distinguished for its harmony with its natural setting and a well thought-out overall planning concept.

The main church of the Gelati Monastery is the only Medieval monument in the larger historic region of Eastern Asia Minor and the Caucasus that still has well-preserved mosaic decoration, comparable with the best Byzantine mosaics, as well as having the largest ensemble of paintings of the middle Byzantine, late Byzantine, and post-Byzantine periods in Georgia, including more than 40 portraits of kings, queens, and high clerics and the earliest depiction of the seven Ecumenical Councils.

Kutaisi is a city in the Rioni Region of Georgia. A visit to Kutaisi is almost mandatory to see the Bagrati Cathedral and Gelati Monastery, which are UNESCO World Heritage sites and offer views from the mountain slopes over the city and the Rioni River. Kutaisi is the traditional rival of Tbilisi for capital status. Since the days of the Golden Fleece, Kutaisi has been considered the capital of Western Georgia (then Ancient Colchis). It is Georgia’s second largest city, but, to the irritation of the proud locals, it does not come even close to Tbilisi’s present size and wealth. Nevertheless, Kutaisi is more respectful of pedestrians than Tbilisi. Its sidewalks are generally even and flat with very few cars parked on them, whereas in Tbilisi pedestrians are often forced into the streets because of cars sitting on sidewalks. Kutaisi drivers generally stop in front of crosswalks to let pedestrians cross, whereas in Tbilisi pedestrians have to be in the middle of the street to get a car to slow down for them [read more].

Zugdidi is a city and the capital in Northwestern Georgia. Zugdidi is a city of about 43,000 (2014) inhabitants. While Zugdidi is not a very popular city with tourists for itself, many pass through it on their way up to Mestia in Svaneti. It does have a few things to see, though, and is located near a national park. Zugdidi is also the gateway to Abkhazia. Bertha von Suttner apparently lived in Zugdidi for a while somewhere between 1876 and 1885, and some locals will proudly mention this fact to you. See Museum Dadiani. Exhibits of natural cultural heritage of Georgia – Tagiloni treasure materials, Mother of God holy vesture, the icon of queen Bordokhan – mother of queen Tamar of Georgia, manuscripts from 13th – 14th centuries, miniatures, memorial relics of Dadiani dynasty, and objects connected to emperor of France Napoleon Bonaparte – brought to the palace by the husband of David Dadiani’s daughter, prince Achille Murat, grandson of Napoleon’s sister, Carolina [read more].

Tbilisi, archaic spelling Tiflis, is the capital city of the country of Georgia, lying on the banks of the Mtkvari River. The metropolitan area covers 726 km² (280 mi²) and has a population of approximately 1½ million (2019). Tbilisi lies in the centre of eastern Georgia, in the foothills of the Trialeti mountain range. According to Georgian legends, it was founded in the 5th century by King Vakhtang Gorgasali who, while hunting, shot a pheasant which fell into a warm spring and was either boiled or healed. Either way, the king was inspired to found a city on the site, and the name of the city derives from the Georgian word tbili meaning “warm”. Although the city has been destroyed and rebuilt 29 times, the layout of the Old Town is largely intact with narrow alleys and big crooked houses built around courtyards. Tbilisi experiences relatively cold winters and hot summers [read more].