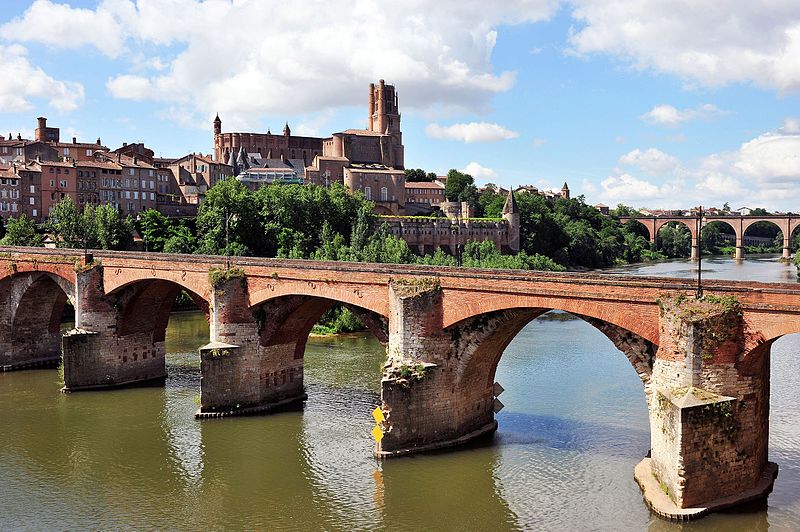 On the banks of the Tarn river in south-west France, the old city of Albi reflects the culmination of a medieval architectural and urban ensemble. Today the Old Bridge (Pont-Vieux), the Saint-Salvi quarter and its church are testimony to its initial development (10th -11th centuries). Following the Albigensian Crusade against the Cathar heretics (13th century) it became a powerful episcopal city. Built in a unique southern French Gothic style from local brick in characteristic red and orange colours, the lofty fortified Cathedral (late 13th century) dominates the city, demonstrating the power regained by the Roman Catholic clergy. Alongside the Cathedral is the vast bishop’s Palais de la Berbie, overlooking the river and surrounded by residential quarters that date back to the Middle Ages. The Episcopal City of Albi forms a coherent and homogeneous ensemble of monuments and quarters that has remained largely unchanged over the centuries.

The Episcopal City of Albi presents a complete built ensemble representative of a type of urban development in Europe from the Middle Ages to the present day. Its monumental and urban elements are complementary and well preserved, in subtle harmony of tones and appearance thanks to the use of local fired brick. It is testimony to a programme which was simultaneously both defensive and spiritual, and which was implemented by the Roman Catholic bishops following the suppression of the Albigensian or Cathar heresy in the 13th century. Sainte-Cécile Cathedral is the most remarkable monumental symbol, in a Gothic architectural style unique to southern France, to which systematic internal painted decoration, a choir, and late Gothic statuary were added in the 15th and 16th centuries. Finally, the outstanding value of the city is expressed by a medieval urban landscape that is both well preserved and extremely authentic.

Criterion (iv): The historic city of Albi presents an outstanding medieval architectural and urban ensemble. It is homogeneous and is expressed through a high-quality urban landscape that possesses high visual coherence because of the generalised and enduring use of local fired brick. Sainte-Cécile Cathedral is an exceptional architectural and decorative example of the adaptation of the Gothic style to the context of Southern France.

Criterion (v): The Albi urban site developed gradually over the centuries, and notably from the Middle Ages. The events of the Albigensian Crusade transformed it into a symbolic Episcopal city structured around its Cathedral and its Episcopal fortress-palace. This is one of the rare examples of ensembles of this kind that are to such a high degree complete and well preserved. It expresses in a very comprehensive way a type of urban settlement that was characteristic of medieval and Renaissance Europe.

Albi is in Tarn, Midi-Pyrenees, in Southwestern France. Albi, the capital of the Department of Tarn, is 75 km northeast of Toulouse. It is probably best-known as the birthplace of the painter and illustrator, Henri de Toulouse-Lautrec. But at least equally relevant to travellers is the Cité épiscopale, an intact set of Mediaeval buildings surrounding the cathedral that was recognized as a UNESCO world heritage site in 2010. The Albigensian Crusade in the 13th century was named for this town which had many of the Cathars that the Church considered heretics. See Albi Cathedral. This beautiful and impressive fortified cathedral was designed to express a renewal in orthodox Catholicism after the Cathar heresy, which had been centred in the area and whose bloody suppression by the Inquisition was largely complete at the time construction began in 1287. The edifice is primarily a brick Gothic construction, but there is a door by Dominique de Florence (Dominick of Florence) and there are also Italian Renaissance frescoes on the ceiling [read more].