Located within what was once the estuary of the River Kaystros, Ephesus comprises successive Hellenistic and Roman settlements founded on new locations, which followed the coastline as it retreated westward. Excavations have revealed grand monuments of the Roman Imperial period including the Library of Celsus and the Great Theatre. Little remains of the famous Temple of Artemis, one of the “Seven Wonders of the World,” which drew pilgrims from all around the Mediterranean. Since the 5th century, the House of the Virgin Mary, a domed cruciform chapel seven kilometres from Ephesus, became a major place of Christian pilgrimage. The Ancient City of Ephesus is an outstanding example of a Roman port city, with sea channel and harbour basin. 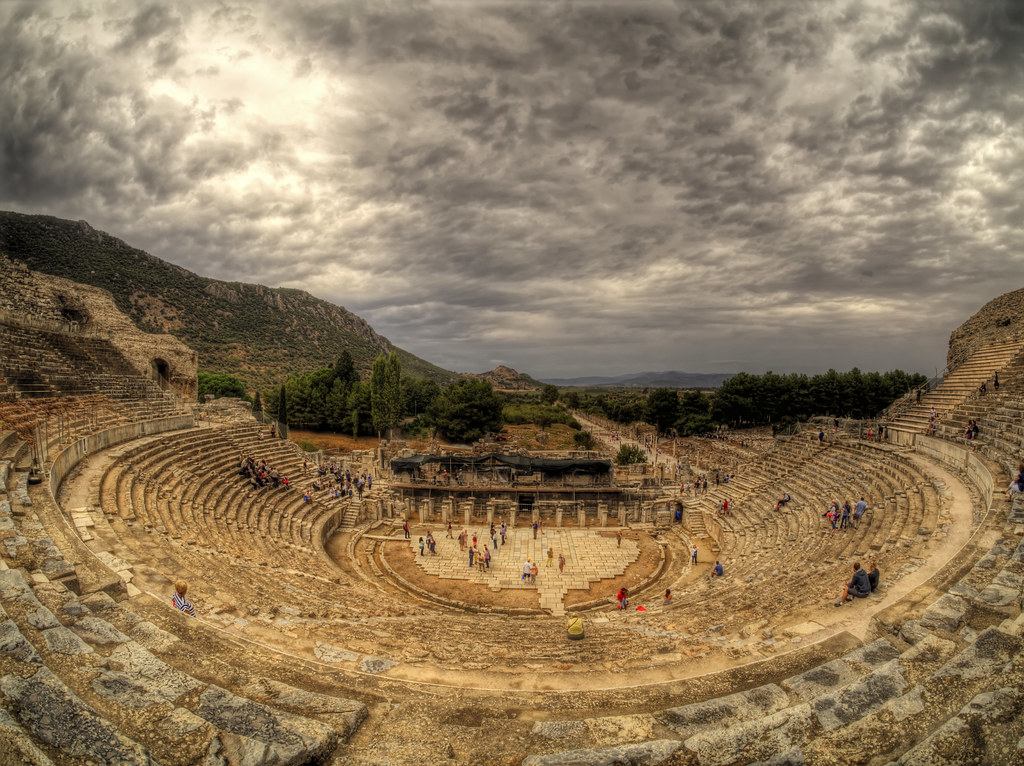 Within what was once the estuary of the river Kaystros, a continuous and complex settlement history can be traced in Ephesus beginning from the seventh millennium BCE at Cukurici Mound until the present at Selçuk. Favourably located geographically, it was subject to continuous shifting of the shore line from east to west due to sedimentation, which led to several relocations of the city site and its harbours. The Neolithic settlement of Cukurici Mound marking the southern edge of the former estuary is now well inland, and was abandoned prior to settlement on the Ayasuluk Hill from the Middle Bronze Age. Founded by the 2nd millennium BCE, the sanctuary of the Ephesian Artemis, originally an Anatolian mother goddess, became one of the largest and most powerful sanctuaries of the ancient world. The Ionian cities that grew up in the wake of the Ionian migrations joined in a confederacy under the leadership of Ephesus. In the fourth century BCE, Lysimachos, one of the twelve generals of Alexander the Great, founded the new city of Ephesus, while leaving the old city around the Artemision. When Asia Minor was incorporated into the Roman Empire in 133 BCE, Ephesus was designated as the capital of the new province Asia. Excavations and conservation over the past 150 years have revealed grand monuments of the Roman Imperial period lining the old processional way through the ancient city including the Library of Celsus and terrace houses. Little remains of the famous Temple of Artemis, one of the ‘seven wonders of the world’ which drew pilgrims from all around the Mediterranean until it was eclipsed by Christian pilgrimage to the Church of Mary and the Basilica of St. John in the 5th century CE. Pilgrimage to Ephesus outlasted the city and continues today. The Mosque of Isa Bey and the medieval settlement on Ayasuluk Hill mark the advent of the Selçuk and Ottoman Turks.

Criterion (iii): Ephesus is an exceptional testimony to the cultural traditions of the Hellenistic, Roman Imperial and early Christian periods as reflected in the monuments in the centre of the Ancient City and Ayasuluk. The cultural traditions of the Roman Imperial period are reflected in the outstanding representative buildings of the city centre including the Celsus Library, Hadrian’s Temple, the Serapeion and Terrace House 2, with its wall paintings, mosaics and marble panelling showing the style of living of the upper levels of society at that time.

Criterion (iv): Ephesus as a whole is an outstanding example of a settlement landscape determined by environmental factors over time. The ancient city stands out as a Roman harbour city, with sea channel and harbour basin along the Kaystros River. Earlier and subsequent harbours demonstrate the changing river landscape from the Classical Greek to Medieval periods.

Criterion (vi): Historical accounts and archaeological remains of significant traditional and religious Anatolian cultures beginning with the cult of Cybele/Meter until the modern revival of Christianity are visible and traceable in Ephesus, which played a decisive role in the spread of Christian faith throughout the Roman Empire. The extensive remains of the Basilica of St. John on Ayasuluk Hill and those of the Church of Mary in Ephesus are testament of the city’s importance to Christianity. Two important Councils of the early Church were held at Ephesus in 431 and 449 CE, initiating the veneration of Mary in Christianity, which can be seen as a reflection of the earlier veneration of Artemis and the Anatolian Cybele. Ephesus was also the leading political and intellectual centre, with the second school of philosophy in the Aegean, and Ephesus as a cultural and intellectual centre had great influence on philosophy and medicine.

Aydın (formerly named Güzelhisar), ancient Greek Tralles, is a city in and the seat of Aydın Province in Turkey’s Aegean Region. The city is located at the heart of the lower valley of Büyük Menderes River (ancient Meander River) at a commanding position for the region extending from the uplands of the valley down to the seacoast. Its population was 207,554 in 2014. Aydın city is located along a region which was famous for its fertility and productivity since ancient times. Figs remain the province’s best-known crop, although other agricultural products are also grown intensively and the city has some light industry. At the crossroads of a busy transport network of several types, a six-lane motorway connects Aydın to İzmir, Turkey’s second port, in less than an hour, and in still less time to the international Adnan Menderes Airport, located along the road between the two cities. A smaller airport, namely Aydın Airport, is located a few kilometers in the South-East of Aydın [read more].

İzmir is a rapidly growing city on the Central Aegean coast of Turkey. İzmir is the third largest city in Turkey with a population of around 3.7 million, the second biggest port after Istanbul, and a very good transport hub. Once the ancient city of Smyrna, it is now a modern, developed, and busy commercial center, set around a huge bay and surrounded by mountains. The broad boulevards, glass-fronted buildings and modern shopping centers are dotted with traditional red-tiled roofs, the 18th century market, and old mosques, churches and synagogues, although the city has an atmosphere more of Mediterranean Europe than traditional Turkey. The history of İzmir stretches back to around 3000 BC when the Trojans founded the city in Tepekule in the northern suburb of Bayrakli, where is now the “Eski Smyrna” museum. This was the Smyrna that is the supposed birthplace of Homer; a common and consistent tradition connects Homer with the valley of Smyrna and the banks of the river Meles [read more].

Denizli is the commercial and transportation hub of inland region of southeastern Aegean Turkey. Denizli is nestled against the hillside at the southern side of the plains of Büyük Menderes River. It’s a busy place partly because of nearby Pamukkale and its travertine pools but mainly because it’s the main commercial hub for the agricultural produce coming from the region. It’s also the place where you probably need to go if you’re in need of cash. Don’t let its looks deceive you when you arrive at the otogar once you proceed beyond the main thoroughfare and its dreary concrete façades which are repeated throughout the city, you find there’s a lively market and all sorts of eateries. Since tourists don’t really come here, you probably won’t be harassed. a Denizli’s climate is subcontinental and Mediterranean; it features quite hot (usually hotter than the coastlines) and dry summers, and cool to chilly, occasionally rainy and scarcely snowy winters [read more].