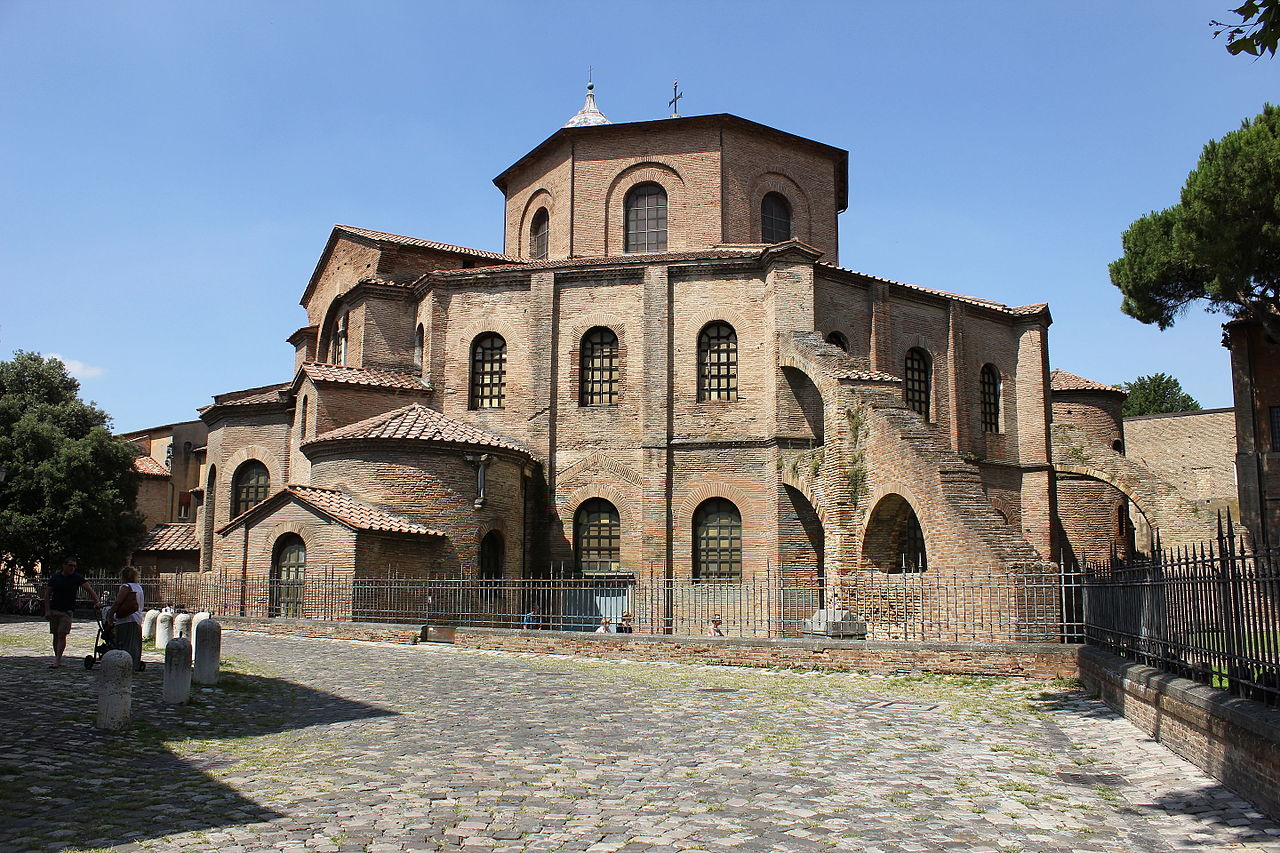 Ravenna was the seat of the Roman Empire in the 5th century and then of Byzantine Italy until the 8th century. It has a unique collection of early Christian mosaics and monuments. All eight buildings – the Mausoleum of Galla Placidia, the Neonian Baptistery, the Basilica of Sant’Apollinare Nuovo, the Arian Baptistery, the Archiepiscopal Chapel, the Mausoleum of Theodoric, the Church of San Vitale and the Basilica of Sant’Apollinare in Classe – were constructed in the 5th and 6th centuries. They show great artistic skill, including a wonderful blend of Graeco-Roman tradition, Christian iconography and oriental and Western styles. 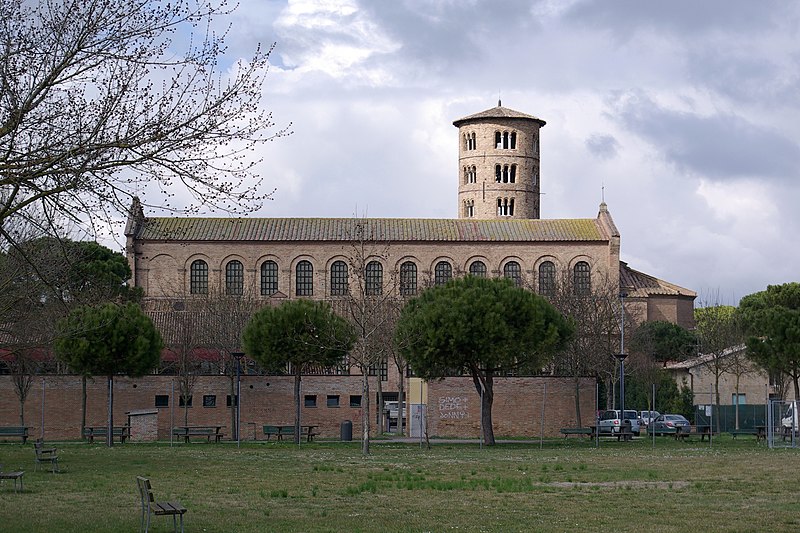 The serial property Early Christian Monuments of Ravenna in north-east Italy consists of eight monuments, namely the Mausoleum of Galla Placidia, the Neonian Baptistery, the Basilica of Sant’Apollinare Nuovo, the Arian Baptistery, the Archiepiscopal Chapel, the Mausoleum of Theodoric, the Church of San Vitale and the Basilica of Sant’Apollinare in Classe, built between the 5th and 6th centuries AD. These religious monuments, decorated with precious marble, stuccos and mosaics, reflect the major historical, political and religious events that took place in Ravenna, which became the capital of the Western Roman Empire in 402 AD, and remained prominent first Ostrogothic and then Byzantine capital in Italy through the fifth and sixth centuries.

The Mausoleum of Galla Placidia, small but lavishly decorated in the inside with inspiring mosaics against a dark blue background, reflects the Western Roman architectural tradition. The Neonian Baptistery, ornate with its inlaid marble, stuccos and multi-coloured mosaics in the cupola, is the finest and most complete surviving example of an Early Christian baptistery. From the peak of the Goths’ reign, the Arian Baptistery preserves mosaics showing the baptism of Christ and iconographic details that reflect principles of the Arian faith. The Basilica of Sant’Apollinare Nuovo was also built during the reign of Theodoric as a Palatine chapel, with mosaics in traditional Roman style that also show a strong Byzantine influence. The Mausoleum of Theodoric is a unique and singular architectural work, constructed out of large blocks of Istrian stone around a central space, and is the only surviving example of a tomb of a barbarian king of this period. The Archbishop’s Chapel, on the other hand, is the only orthodox monument built during Theodoric’s reign. The Basilica of San Vitale, from the time of Justinian, is one of the highest creations of Byzantine architecture in Italy, and combines elements from both the Western and Eastern traditions. Lastly, five kilometres from Ravenna we find the Basilica of Sant’Apollinare in Classe, an imposing building with its impressive forms, cylindrical bell tower, spacious interiors and rich marbles and mosaics.

The Early Christian buildings of Ravenna are unique testimonies of the artistic contacts and developments in a highly significant period of the cultural development in Europe. They constitute an epitome of religious and funerary art and architecture during the 5th and 6th centuries AD. The mosaics are among the best surviving examples of this form of art in Europe and have added significance due to the blending of western and eastern motifs and techniques.

Criterion (i): The Early Christian Monuments of Ravenna are of outstanding significance by virtue of the supreme artistry of the mosaic art they contain.

Criterion (ii): The Early Christian Monuments of Ravenna are without parallel because of the crucial evidence they provide of artistic and religious relationships and contacts at an important period of European cultural history. The mosaics are among the best surviving examples of this form of art in Europe and have an increased significance due to the blending of western and eastern motifs and techniques

Criterion (iv): The property constitutes an epitome of religious and funerary art and architecture during the 6th century AD.

Ravenna is a city in the Romagna zone of Emilia-Romagna. Ravenna is the home of the Mosaic Basilica, with a delightful small town atmosphere plus other UNESCO World Heritage listed early Christian monuments. The nearest airport to Ravenna is in Forli (about 20 km), but as of 2016 there no commercial flight to there. The other relatively close airports are in Bologna (about 80 km) and Rimini. In season there is a shuttle bus service – CRAB – operates between the Bologna airport and Ravenna (continuing to Cervia). Walk. The old town is a mainly pedestrian area with cafes and bars on every corner and some hidden away through small access alleys. Note that everything is a little more expensive near the Basilica. Mi Muovo is an integrated public transport pass for the region. Short-stay visitors might use “Mi Muovo Multibus”, a 12-trip bus ticket, see Emilia Romagna#Get around. The early Christian monuments of Ravenna are included into UNESCO World Heritage list [read more].

Bologna is a historical city, with around 380,000 inhabitants. Although it is well known by Italians, it is less so among foreign visitors. Little English is spoken by its residents. It is the capital and largest city of Emilia-Romagna (a region in northern Italy). Bologna is famed for the oldest university in the Western world, lively student population, exquisite food, typical brick terracotta-roofed architecture and porticos, theatre and nightlife. Bologna is famous for its cuisine (la cucina Bolognese). It is also viewed as a progressive and well-administered city. It is considered second only to Venice in beauty by many Italians and certainly has one of the largest and best preserved historic centers among Italian cities. Its architecture is noted for its palette of terracotta reds, burnt oranges, and warm yellows, hence the name of Bologna la rossa (Bologna the red). The extensive town center, characterized by miles of attractive covered walkways, known as “porticos,” is one of the best-preserved in Europe [read more].

Florence is the capital of the region of Tuscany in Italy, with a population of about 366,500. The city is a cultural, artistic and architectural gem, and is inscribed on the UNESCO World Heritage list. The birthplace of the Italian Renaissance, Florence was the home to powerful families, creative geniuses and scientific masterminds who left their legacies in the city’s many museums and art galleries. The city also has a very rich literary history, being the birthplace of the famous poet Dante, and standard Italian today is primarily based on the dialect of Tuscan spoken in Florence. Politically, economically, and culturally, Florence was the most important city in Europe for around 250 years, from some time before 1300 until the early 1500s. Florentines reinvented money, in the form of the gold florin. This currency was the engine that drove Europe out of the Dark Ages, a term invented by Petrarch, a Florentine whose family had been exiled to Arezzo [read more].