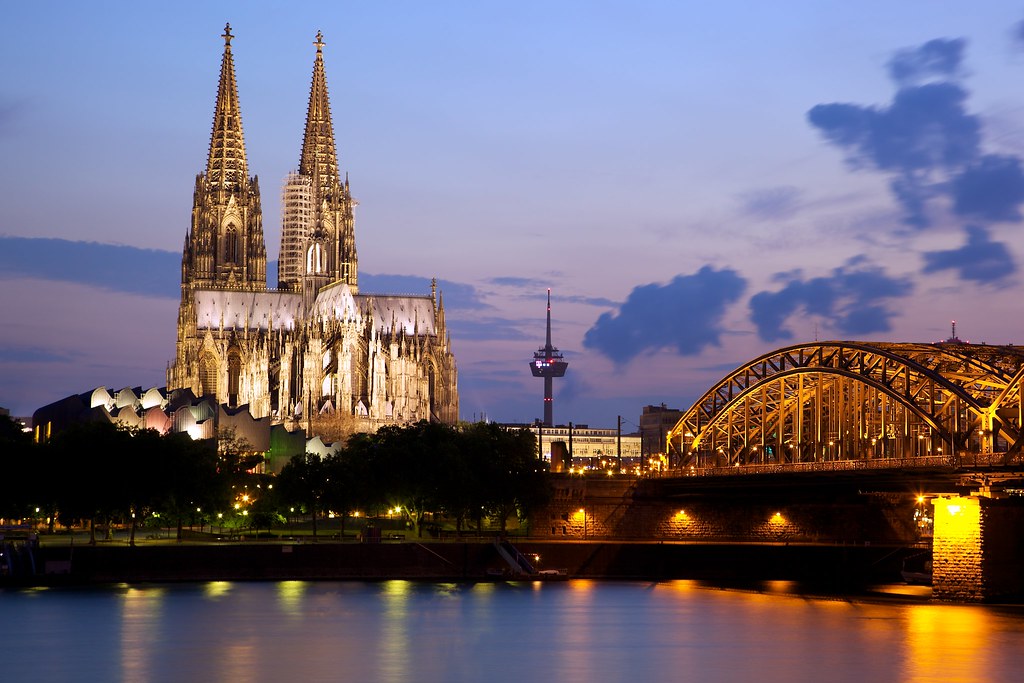 Begun in 1248, the construction of this Gothic masterpiece took place in several stages and was not completed until 1880. Over seven centuries, successive builders were inspired by the same faith and a spirit of absolute fidelity to the original plans. Apart from its exceptional intrinsic value and the artistic masterpieces it contains, Cologne Cathedral testifies to the enduring strength of European Christianity. 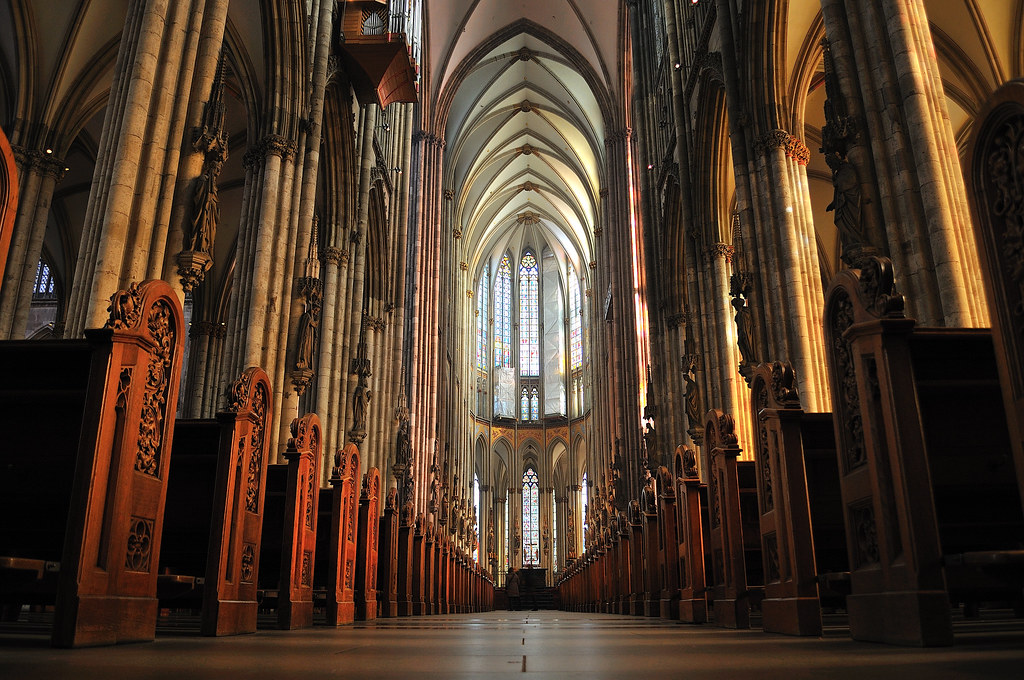 Begun in 1248, the building of this Gothic masterpiece took place in several stages and was not completed until 1880. Over seven centuries, its successive builders were inspired by the same faith and by a spirit of absolute fidelity to the original plans. Apart from its exceptional intrinsic value and the artistic masterpieces it contains, Cologne Cathedral bears witness to the strength and endurance of European Christianity. No other Cathedral is so perfectly conceived, so uniformly and uncompromisingly executed in all its parts.

Cologne Cathedral is a High Gothic five-aisled basilica (144.5 m long), with a projecting transept (86.25 m wide) and a tower façade (157.22 m high). The nave is 43.58 m high and the side-aisles 19.80 m. The western section, nave and transept begun in 1330, changes in style, but this is not perceptible in the overall building. The 19th century work follows the medieval forms and techniques faithfully, as can be seen by comparing it with the original medieval plan on parchment.

The original liturgical appointments of the choir are still extant to a considerable degree. These include the high altar with an enormous monolithic slab of black limestone, believed to be the largest in any Christian church, the carved oak choir stalls (1308-11), the painted choir screens (1332-40), the fourteen statues on the pillars in the choir (c. 1300), and the great cycle of stained-glass windows, the largest existent cycle of early 14th century windows in Europe. There is also an outstanding series of tombs of twelve archbishops between 976 and 1612.

Of the many works of art in the Cathedral, special mention should be made to the Gero Crucifix of the late 10th century, in the Chapel of the Holy Cross, which was transferred from the pre-Romanesque predecessor of the present Cathedral, and the Shrine of the Magi (1180-1225), in the choir, which is the largest reliquary shrine in Europe. Other artistic masterpieces are the altarpiece of St. Clare (c. 1350-1400) in the north aisle, brought here in 1811 from the destroyed cloister church of the Franciscan nuns, the altarpiece of the City Patrons by Stephan Lochner (c. 1445) in the Chapel of Our Lady, and the altarpiece of St. Agilolphus (c. 1520) in the south transept.

Criterion (i): Cologne Cathedral is an exceptional work of human creative genius.

Criterion (ii): Constructed over more than six centuries Cologne Cathedral marks the zenith of cathedral architecture and at the same time its culmination.

Criterion (iv): Cologne Cathedral is a powerful testimony to the strength and persistence of Christian belief in medieval and modern Europe.

Cologne is a city on the Rhine river in North Rhine-Westphalia. It is the fourth largest city in Germany with around one million residents. It is one of the nation’s media, tourism and business hotspots, and is considered one of the most liberal cities in Germany. Cologne has a rich history, reaching back to the time of the ancient Roman Empire, when it was founded. It has remained a constantly inhabited important regional centre since. Compared to other German and European cities, the ancient and medieval Cologne was relatively large, covering most of the modern-day city centre. A wealth of architectural heritage can therefore be found across the city ranging from pre-Christian times to strikingly modern buildings, with a high concentration of Romanesque and Gothic architecture, culminating in the magnificent cathedral (Dom). Cologne is, however, not only a tourist destination, but on an equal note a major economic centre, a globally important trade fair location, a culture and media hotspot and a major transportation hub [read more].

Düsseldorf is a city on the River Rhine in western Germany and is the capital city of the state of North Rhine-Westphalia. It is one of the economic centres of the country, and a major city within the Rhine-Ruhr metropolitan area, with a population of 620,000 (2018). While Frankfurt is the German hub for financial services and many other German cities excel in various branches of industry, Düsseldorf has the highest concentration of professional services, creative industries and media, and is regarded as the German capital of fashion. Düsseldorf also hosts a large number of German or European head offices of Japanese companies, and has a considerable Japanese population, forming over 1% of the city’s population. The city is famous for its nightlife, carnival, events, shopping and for fashion and trade fairs like the Boot Messe (trade fair for boats and watersports) and Igedo (fashion fair). Every year, more than 4 million people visit the Kirmes fun fair which runs for 10 days in the summer [read more].

Frankfurt is the largest city in the German state of Hesse, and is considered the business and financial centre of Germany. It is the fifth largest city in Germany after Berlin, Hamburg, Munich and Cologne. The city is known for its modern skyline, and for hosting the headquarters of the European Central Bank, the Deutsche Börse stock exchange and numerous German financial services companies. Furthermore, it hosts some of the world’s most important trade shows, such as the Frankfurt Auto Show and the Frankfurt Book Fair. Located on the river Main at a crossroad of the German Autobahn system and connected to several high-speed rail lines, with Germany’s busiest airport on its outskirts, Frankfurt is one of the most important transportation hubs of Europe. Frankfurt is a city of contrasts. Wealthy bankers, students and hippie drop-outs coexist in a city that has some of the highest, most avant-garde skyscrapers of Europe next to well maintained old buildings [read more].