From the 13th century to the advent of the railway in the early 20th century, Safranbolu was an important caravan station on the main East–West trade route. The Old Mosque, Old Bath and Süleyman Pasha Medrese were built in 1322. During its apogee in the 17th century, Safranbolu’s architecture influenced urban development throughout much of the Ottoman Empire. 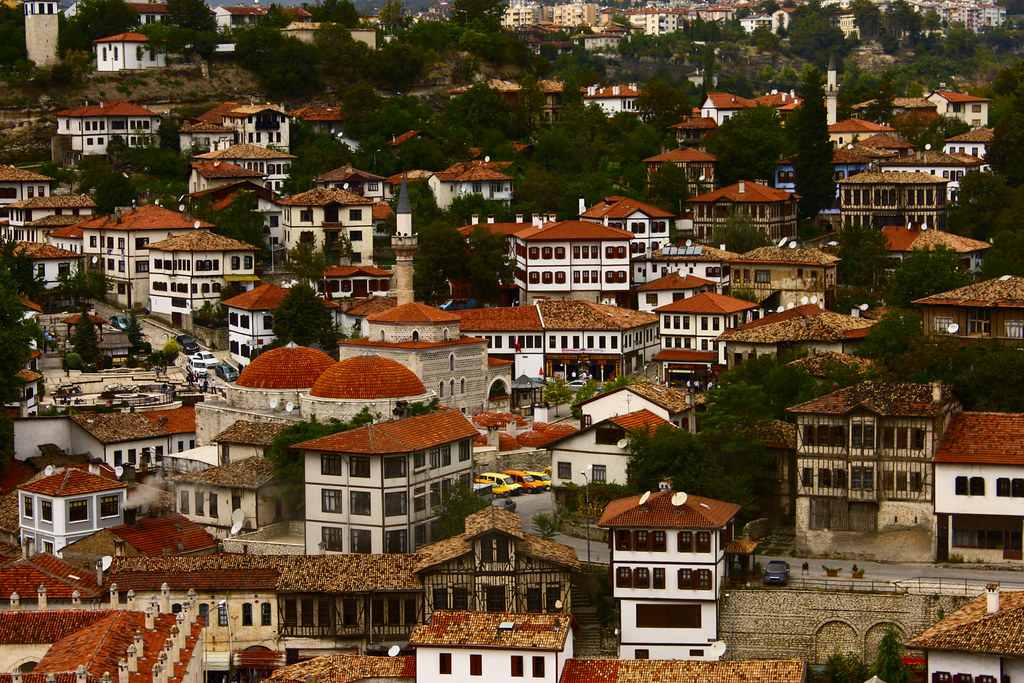 The City of Safranbolu is a typical Ottoman city, with typical buildings and streets, and played a key role in the caravan trade over many centuries. The settlement developed as a trading centre after the Turkish conquest in the 11th century, and by the 13th century, it had become an important caravan station. Its layout demonstrates the organic growth of the town in response to economic expansion, and its buildings are representative of its evolving socio-economic structure up to the disappearance of the traditional caravan routes and beyond.

Safranbolu consists of three distinct historic districts; the market place area of the inner city, known as Çukur, the area of Kıranköy, and Bağlar (the Vineyards). Çukur lies in the lower part of the town and has a triangular shape defined by two rivers. Its centre is the market place, surrounded by the houses and workshops of craftsmen. The segregation of the city centre is very typical for Anatolian cities. Kıranköy was formerly a non-Muslim district, with a socio-architectural pattern similar to that in contemporary European towns, with the artisans and tradesmen living above their shops. The houses in this district are built of stone, in contrast to the wooden houses in Çukur, which illustrates how the separation of Muslim and non-Muslim quarters during the Ottoman Period enabled each community to establish settlements according to their own traditions.

The pattern of settlement in Bağlar (the Vineyards) consists of single houses set within large gardens. This district on the northwest slope of the city, looking to the south, was the summer resort for the city.

The streets in Çukur and Kıranköy are narrow and curved, creating a wider view at the corners following topographic lines, and the various consoles of the houses contribute to creating interesting street perspectives. The streets feature stone paving, sloping inwards to evacuate surface water, and older houses are half-timbered, while the spaces between the timbers are filled with various building materials. There are no windows on the street frontage, so that stone walls resemble extensions of garden walls. The main rooms on the first floors are usually panelled with built-in cupboards, fireplaces, shelves and benches. Many of the ceilings are lavishly carved and painted. The rooms serve different purposes and are connected together with halls called “sofa”, which are very important elements of the house.

Criterion (ii): By virtue of its key role in the caravan trade over many centuries, Safranbolu enjoyed great prosperity. As a result, it set a standard in public and domestic architecture that exercised a great influence on urban development over a large area of the Ottoman Empire.

Criterion (iv): For centuries, the caravan trade was the main commercial link between the Orient and Europe. As a result, characteristic towns developed along its route. With the emergence of railways in the 19th century, these towns abruptly lost their raison d’être, and most of them were adapted to other economic purposes. After the collapse of the caravan trade, Safranbolu’s proximity to the Karabük steel works gave it a new socio-economic role, although it preserved its original form and buildings to a remarkable extent.

Criterion (v): Safranbolu is a typical Ottoman city that displays an interesting interaction between its topography and historic settlement.

Karabük is a town and the capital district of Karabük Province in the Black Sea region of Turkey. According to the 2009 census, population of the city is 108 167. The district covers an area of 760 km2 (293 sq mi), and the town lies at an elevation of 354 m (1,161 ft). Karabük was built in the 1930s as the seat of the iron and steel industry of Turkey. Thus it has one of the worst- if not the worst – air pollution in the country, with a hazardous Air Quality Index of 328. Karabük lies in a location near Filyos River formed by the merge of Araç and Soğanlı rivers. Karabük is situated on an important trade route between Amasra on the coast and central Anatolia. The history of the city goes back to the early years of the Turkish Republic, when it was a small sub-village formed by 13 houses in the Öğlebeli village of Safranbolu [read more].

Zonguldak is a city in western part of Black Sea Turkey. It is located on the shore of Black Sea. As conveyors and rails everywhere at the entrance of the downtown mark, this bleak industrial town leaning against a steep mountainfoot with just a small section of downtown lying on flat ground is surrounded by coal mines, which indeed are the reason of town’s existence. While the city itself may have little to offer to a passing by traveller, it may serve as a convenient hub for surrounding resorts and sights. Also, the lush mountains around the city can easily make you forget the smog and the grey ambience of Zonguldak. Since most of the city cascades down from a steep mountain side, be ready to climb up and down lots of stairs. The (flat-ish) land is so scarce that some of the alleys you may come across at the residential neighbourhoods are actually rooftops of the houses lined at the street one level below [read more]!

Ankara is Turkey’s capital, and its second city in size after Istanbul. Literally and figuratively, it is at the heart of Turkey and of Central Anatolia, the surrounding region. Ankara is a sprawling, modern city which can appear as little more than a dull, concrete jungle at first glance — most non-local Turks view Ankara as a depressive and grey city with nothing in offer other than the boring world of politics. Consequently, many tourists tend to use it merely as a transit point for getting to places like Konya or Cappadocia. However, Ankara does have a lot to offer for those prepared to look a bit deeper — as the proud capital of the Turkish Republic, it is easy to trace the steps of the early republican years here, whether it be in the shape of the fine buildings of the first national architecture movement or the 1940s monuments following the totalitarian aesthetics of the era [read more].