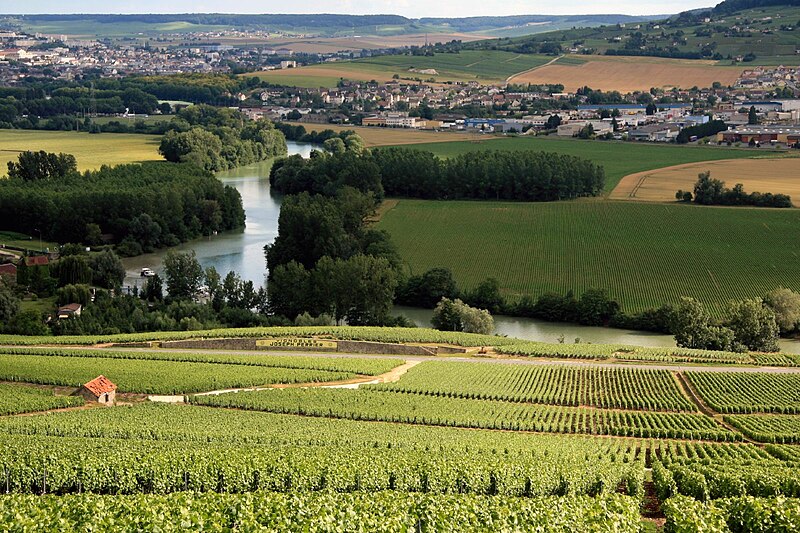 The property encompasses sites where the method of producing sparkling wines was developed on the principle of secondary fermentation in the bottle since the early 17th century to its early industrialization in the 19th century. The property is made up of three distinct ensembles: the historic vineyards of Hautvillers, Aÿ and Mareuil-sur-Aÿ, Saint-Nicaise Hill in Reims, and the Avenue de Champagne and Fort Chabrol in Epernay. These three components – the supply basin formed by the historic hillsides, the production sites (with their underground cellars) and the sales and distribution centres (the Champagne Houses) – illustrate the entire champagne production process. The property bears clear testimony to the development of a very specialized artisan activity that has become an agro-industrial enterprise.

In north-east France, on cool, chalky land, the Champagne Hillsides, Houses and Cellars form a very specific agro-industrial landscape, with the vineyards as the supply basin and villages and urban districts concentrating the production and trading functions. The imperatives of Champagne wine production have resulted in an original, three-pronged organisation, based on functional town planning, prestigious architecture and an underground heritage. This agro-industrial system, which has structured not only the landscape but also the local economy and daily life, is the outcome of a long process of development, technical and social innovations, and industrial and commercial transformations, which speeded up the transition from an artisanal crop to mass production of a product sold around the world. Women and the Franco-German heirs of the old Champagne fairs played a special role in this evolution, which has its roots in Hautvillers, among the hills of Aÿ, the heart of the wine-growing sector. In the 18th and 19th centuries, it then spread to the two nearest towns, to Saint-Nicaise Hill in Reims and to Avenue de Champagne in Épernay, which were entirely built on the wine-growing activity of Champagne. The three ensembles that make up the property embody the Champagne terroir and serve as a living and a working environment and a showcase for traditional know-how. Patronage has also been a source of social innovation, the greatest emblem of which is the Chemin Vert garden city in Reims. This is the place where the benchmark method of producing sparkling wine was born, a method that would spread and be copied across the world from the 19th century up to the present day. Champagne is a product of excellence, renowned as the universal symbol of festiveness, celebration and reconciliation.

Criterion (iii): The Champagne Hillsides, Houses and Cellars are the outcome of expertise perfected over the generations, of exemplary inter-professional organisation and of the protection of the appellation, as well as the development of inter-cultural relations and social innovations over a long period of time, which women also took part in. Through the development of traditional know-how, the people of Champagne have overcome a number of obstacles, both in the vineyards (a harsh climate and rather infertile chalky soils), and in the wine-making process, through their mastery of sparkling wine production techniques, and in assembly and bottling. Champagne enterprise was able to gain from the technological and entrepreneurial contributions of the British and Germans. The equilibrium between wine-growers and the Champagne Houses led to the development of a pioneering inter-professional structure that is still active today.

Criterion (iv): As the legacy of wine-growing and wine-making practices perfected over the centuries, production in Champagne is founded on its supply basin (the vineyards), its processing sites (the vendangeoirs, where grapes are pressed, and the cellars) and its sales and distribution centres (the headquarters of the Houses). They are functionally intertwined and intrinsically linked to the chalky substratum where the vines grow, which is easy to hollow out and which is also found in the architecture. The production process specific to Champagne, based on secondary fermentation in the bottle, required a vast network of cellars. In Reims, the use of the former Gallo-Roman and medieval chalk quarries, and the digging of suitable cellars in Épernay or on the hillsides, led to the formation of an exceptional underground landscape – the hidden side of Champagne. As Champagne has been exported around the world since the 18th century, trade development resulted in a special kind of town planning, which integrated functional and showcasing goals: new districts were built around production and sale centres, linked to the vineyards and to transport routes.

Criterion (vi): The Champagne, Hillsides, Houses and Cellars, and particularly the Saint-Nicaise Hill, with its monumental quarry-cellars and its early Champagne Houses, and the Avenue of Champagne, with the showcasing spaces of the commerce houses, convey in an outstanding manner the unique and world-renowned image of Champagne as a symbol of the French art of living, of festiveness and celebration, of reconciliation and victory (particularly in sport). Literature, painting, caricatures, posters, music, cinema, photography and even comics all testify to the influence and the constancy of this unique wine’s image.

Reims (sometimes spelled “Rheims” in English), a city in northern France, is perhaps best known for its world heritage listed cathedral, where generations of French kings were crowned. It is also the largest city in the Champagne area and some the champagne cellars located in the city are likewise inscribed on the world heritage list. Reims, the home of champagne (the most celebrated and celebratory wine in the world), is the main city of the Champagne area. It is a charming city, and one that the French hold dear to their hearts. There stands one of the most beautiful buildings of the Middle Ages in Europe, one that is filled with history: almost all French kings were crowned there for about 1,000 years. Most of the old houses were destroyed during World War I, and the city was extensively rebuilt in the 1920s in an Art Deco style. Reims, Épernay and Ay are the main places of champagne production [read more].

Troyes is in the Grand-Est region of France. Troyes has a famous Gothic cathedral [read more].

Paris, the cosmopolitan capital of France, is one of the largest agglomerations in Europe, with 2.2 million people living in the dense (105 km²) central city, 7 million people in the Metropole du Grand Paris (814 km²) and almost 12 million people living in the metropolitan area. In the north of the country on the river Seine, Paris has the reputation of being the most beautiful and romantic of all cities, brimming with historic associations and remaining vastly influential in the realms of culture, art, fashion, food and design. Dubbed the City of Light (la Ville Lumière) and Capital of Fashion, it is home to some of the world’s finest and most luxurious fashion designers and cosmetics, such as Chanel, Christian Dior, Yves Saint-Laurent, Guerlain, Lancôme, L’Oréal, and Clarins. A large part of the city, including the banks of the Seine, is a UNESCO World Heritage Site. The city has the second highest number of Michelin-starred restaurants in the world (after Tokyo, which is much larger) and contains numerous iconic landmarks such as the Eiffel Tower, the Arc de Triomphe, Notre-Dame de Paris, the Louvre, the Moulin Rouge and the Basilique du Sacré Cœur, making it one of the most popular international tourist destinations in the world, with around 14 million tourists annually [read more].