The Athena temple complex, including the Delphic Tholos (Ronny Siegel/Flickr, CC BY 2.0).

The pan-Hellenic sanctuary of Delphi, where the oracle of Apollo spoke, was the site of the omphalos, the ‘navel of the world’. Blending harmoniously with the superb landscape and charged with sacred meaning, Delphi in the 6th century B.C. was indeed the religious centre and symbol of unity of the ancient Greek world. 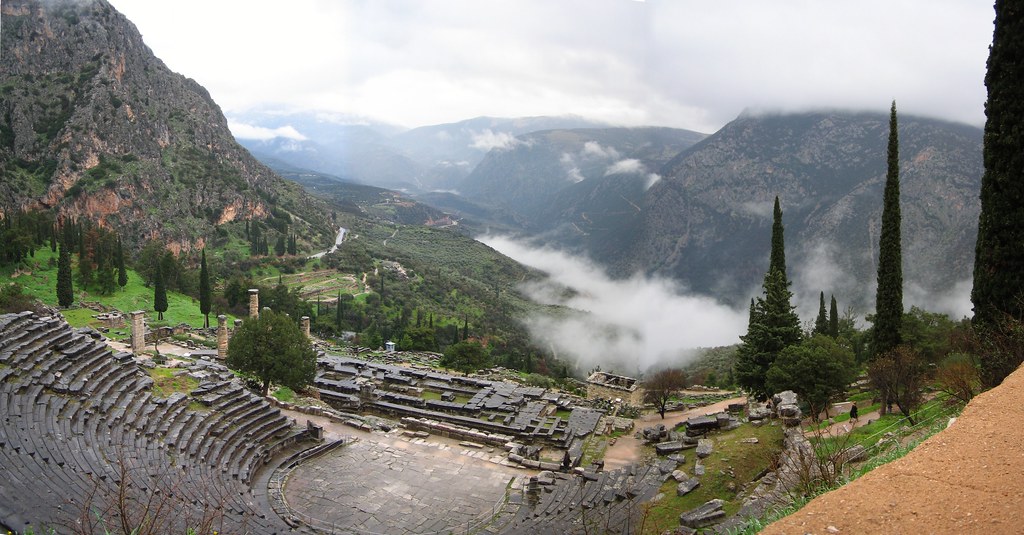 Delphi lies between two towering rocks of Mt. Parnassus, known as the Phaidriades (Shining) Rocks, in the Regional unit of Phocis in Central Greece. Here lies the Pan-Hellenic sanctuary of Apollo, the Olympian god of light, knowledge and harmony. The area was inhabited in the 2nd millennium BC, as is evident from Mycenaean remains (1500-1100 BC). The development of the sanctuary and oracle began in the 8th century BC, and their religious and political influence over the whole of Greece increased in the 6th century BC. At the same time, their fame and prestige spread throughout the whole of the then known world, from which pilgrims came to the site to receive an oracle from the Pythia, the priestess of Apollo. A place with a rich intangible heritage, Delphi was the centre of the world (omphalos) in the eyes of the ancient Greeks: according to myth, it was the meeting point of two eagles released by Zeus, one to the East and one in the West. The magnificent monumental complex is a human-made environment in perfect harmony with the rare natural environment, the principal features of which gave rise to the organisation of the cults. This harmonious relationship, which has remained undisturbed from ancient times to the present day, makes Delphi a unique monument and a priceless legacy bequeathed by the ancient Greek world to following generations.

Criterion (i): The layout of Delphi is a unique artistic achievement. Mt. Parnassus is a veritable masterpiece and is where a series of monuments were built whose modular elements – terraces, temples, treasuries, etc. – combine to form a strong expression of the physical and moral values of a site which may be described as magical.

Criterion (ii): Delphi had an immense impact throughout the ancient world, as can be ascertained by the various offerings of kings, dynasts, city-states and historical figures, who deemed that sending a valuable gift to the sanctuary, would ensure the favour of the god. The Sanctuary at Delphi, the object of great generosity and the crossroads of a wide variety of influences, was in turn imitated throughout the ancient world. Its influence extended as far as Bactria, following the conquest of Asia by Alexander the Great. Even pillaging of the Sanctuary by the emperor Nero and by Constantine the Great, who transported spoils from it to Rome and Constantinople, added to the artistic influence of Delphi.

Criterion (iii): Delphi bears a unique testimony to the religion and civilization of ancient Greece. At the legendary site where Apollo slew the serpent Python, celestial cults replaced chthonian cults and introduced the old heritage of myths originating from primitive times. The Delphic oracle, over which four sacred wars were fought, is one of the focal points of Greek political history, while the Theatre and the Stadium, where the Pythian Games took place every four years, were places of community celebrations reflecting triumphant Hellenism.

Criterion (iv): Delphi, situated in a magnificent natural setting which is still intact, is an outstanding architectural ensemble and an example of a great Pan-Hellenic sanctuary.

Criterion (vi): According to the ancients, the Temple of Apollo was where the Omphalos was located, that is, the navel of the universe, the centre of the earth. Delphi is consequently directly and tangibly associated with a belief of manifest universal significance.

Patras is the third largest city of Greece, after Athens and Thessaloniki. It is the capital of the Prefecture of Achaia on the Peloponnese and the western gateway into the country, thanks to numerous ferry connections with Italy. The wide array of special events, exhibits, festivals, and various ongoing presentations, continue to delight large numbers of travelers annually, all of which have been designed to show the city of Patras at its best. For those who have never experienced the city, it is one of the best examples of a true Greek city. In addition to its tourist industry, Patras relies heavily on agriculture, its prolific wine country, and its busy shipping industry. However, it is also renowned for its colorful Carnival Season and how it has preserved the performances of ancient Greek theatre, held every year in February–March. Being the city’s flagship during the last 170 years, it is without any doubt the greatest local celebration and has long been widely acknowledged in Greece and abroad [read more].

Athens, is the capital city of Greece with a metropolitan population of 3.7 million inhabitants (2020). It is in many ways the birthplace of Classical Greece, and therefore of Western civilization. The first pre-historic settlements were constructed in 3000 BC around the hill of Acropolis. According to legend the King of Athens, Theseus, unified the ten tribes of early Athens into one kingdom in around 1230 BC. This process of synoikismos – bringing together in one home – created the largest and wealthiest state on the Greek mainland, but it also created a larger class of people excluded from political life by the nobility. By the 7th century BCE, social unrest had become widespread, and the Areopagus appointed Draco to draft a strict new law code (hence “draconian”). Still, the Draconian laws were a big advancement, as they codified crime and punishment unlike the previous arbitrary judgments of the rulers. When Draco’s system failed, they appointed Solon, with a mandate to create a new constitution (594) [read more].