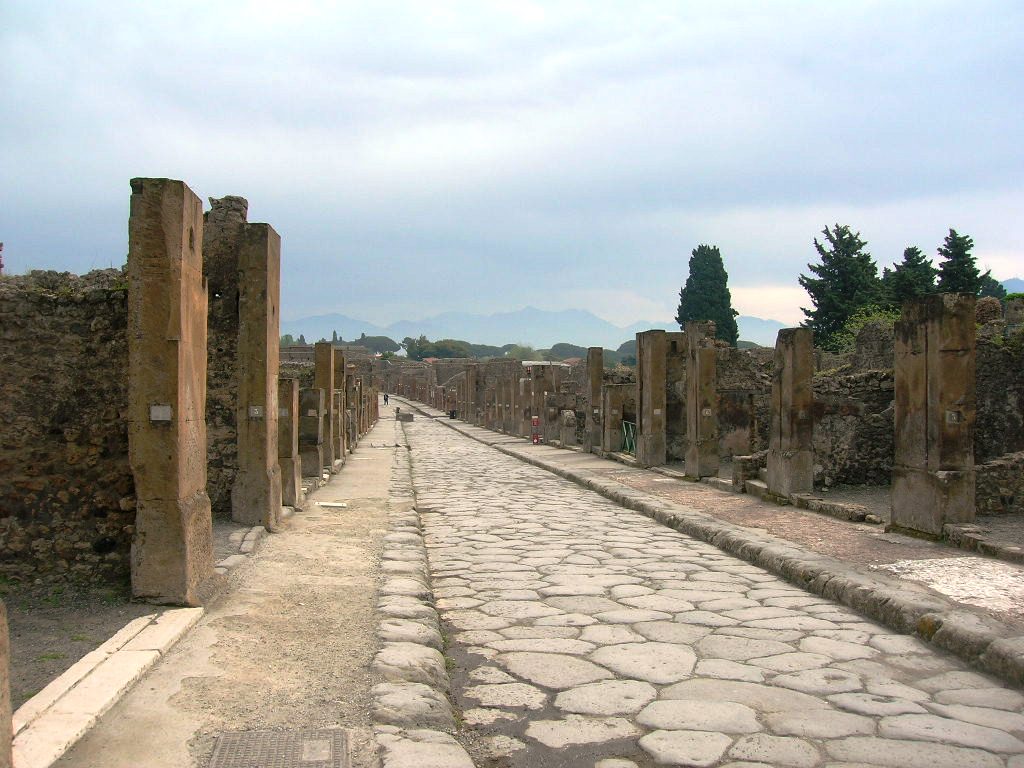 Via Dell’Abbondanza, the main street in Pompeii (Mentnafunangann/Wikipedia, CC BY-SA 3.0).

When Vesuvius erupted on 24 August AD 79, it engulfed the two flourishing Roman towns of Pompei and Herculaneum, as well as the many wealthy villas in the area. These have been progressively excavated and made accessible to the public since the mid-18th century. The vast expanse of the commercial town of Pompei contrasts with the smaller but better-preserved remains of the holiday resort of Herculaneum, while the superb wall paintings of the Villa Oplontis at Torre Annunziata give a vivid impression of the opulent lifestyle enjoyed by the wealthier citizens of the Early Roman Empire. 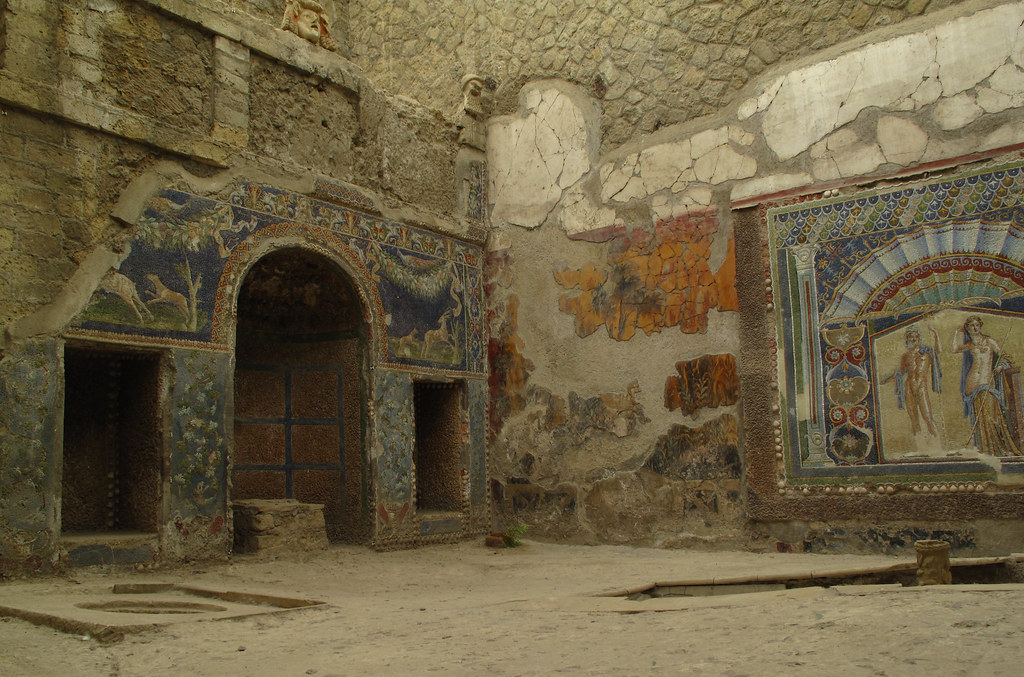 The World Heritage property includes three different archaeological areas: the ancient towns of Pompeii and Herculaneum together with the Villa of the Mysteries (to the west of Pompeii) and the Villa of the Papyri (to the west of Herculaneum), and the Villa A (Villa of Poppaea) and Villa B (Villa of Lucius Crassius Tertius) in Torre Annunziata. The vast expanse of the commercial town of Pompeii contrasts with the smaller but better-preserved remains of the smaller Herculaneum, while Villa A in Torre Annunziata gives a vivid impression of the opulent lifestyle enjoyed by the wealthier citizens of the early Roman Empire.

When Vesuvius erupted in 79 AD, it engulfed the two flourishing Roman towns of Pompeii and Herculaneum, as well as the many wealthy countryside villas in the area. Pompeii was buried largely by a thick layer of volcanic ash and lapilli and Herculaneum disappeared under pyroclastic surges and flows. These sites have been progressively excavated and made accessible to the public since the mid-18th century. However, in the case of Herculaneum large areas of the ancient town still lie under the modern town and have only been explored and surveyed by the network of 18th-century tunnels that drew the attention of Grand Tour visitors, the basis still today for visiting the Herculaneum’s underground ancient theatre. These areas are mostly not currently included in the World Heritage property.

Pompeii, with its well-preserved buildings in an excavated area of 44 ha, is the only archaeological site in the world that provides a complete picture of an ancient Roman city. The main forum is flanked by a number of imposing public buildings, such as the Capitolium, the Basilica and temples and within the city there are also many public bath complexes, two theatres and an amphitheatre.

In Herculaneum several impressive public buildings are well preserved, including a spacious palaestra accessed through a monumental gateway, two sets of public baths, one of which (Central Thermae) is monumental and vividly decorated, the College of the Priests of Augustus, and a theatre of standard form. The Villa of the Papyri, outside the city walls, is an opulent establishment. The town is also noteworthy for the completeness of its shops, still containing equipment such as enormous wine jars.

Herculaneum’s urban districts and seafront display a higher level of preservation with noteworthy conservation of upper floors thanks to the pyroclastic material that buried the town. Organic matter was often carbonized by the high temperatures and exceptionally preserved finds include everyday objects such as foodstuffs, architectural elements and wooden furniture.

Both Pompeii and Herculaneum are renowned for their remarkable series of residential and commercial buildings, built along well-paved streets. The earliest is the atrium house, entirely inward-looking with a courtyard at its centre: the House of the Surgeon at Pompeii is a good example. Under Hellenistic influences, this type of house was enlarged and decorated with columns and arcades and equipped with large representative rooms. In its highest form, this type of Roman house, known from towns all over the Empire, developed into a veritable mansion, richly decorated and with many rooms, of which the House of the Faun and the House of the Chaste Lovers are outstanding examples.

The suburban villas across the Vesuvian area are perhaps even more exceptional in terms of the scale of their buildings and grounds, as well as their lavish decorations. The Villa of the Mysteries is an enormous residence just outside Pompeii’s city walls, developed from a modest house built in the 3rd century BC, named from the remarkable wall paintings in the triclinium, which depict the initiation rites (‘mysteries’) of the cult of Dionysus.

The two villas in Torre Annunziata are both extraordinary examples of suburban buildings in the countryside of Pompeii. The villa A, so-called “of Poppaea”, is a huge maritime residence built in the middle of the 1st century BCE, enlarged during the Imperial period and under restoration at the moment of the eruption. It is especially well known for its magnificent and well-preserved wall paintings, one of the most important examples of Roman painting with their superb illusionistic frescos of doors, colonnades and garden views. On the other hand, villa B is an excellent example of villa rustica provided with rooms and spaces designated for market activities such as storage of amphoras and trading of locally produced foodstuffs, especially wine.

There were many changes to these buildings over time in response to changing circumstances of the owners; these include repairs and adjustments that were a response to the seismic events that led up to the AD 79 eruption and reflect a community living with changing environmental and economic conditions.

A special feature of Pompeii is the wealth of graffiti on its walls. An election was imminent at the time of the eruption, and there are many political slogans scrawled on walls, as well as others of a more personal nature, often defamatory. At Herculaneum, the volcanic deposits preserved hundreds of wax tablets, some of which conserve legal documents, and more than 1,800 papyri scrolls containing Greek philosophical texts were found at the Villa of the Papyri.

The diverse range of literary sources available in Pompeii and Herculaneum provides a picture of the final decades of these ancient cities and the image of socially complex and dynamic communities, representing exceptional evidence of typical ways of life in Roman society in the first century AD and the importance of texts in political and private life.

Other important sources of archaeological evidence are the human remains of those who died in the eruption. Pompeii witnessed an early archaeological experiment when plaster was poured into voids found in the volcanic material and which allowed casts to be made of the forms of the human and animal victims and other organic material. At Herculaneum, on the other hand, about 300 skeletons were discovered along the ancient shoreline. The study of these significant samples of victims from the towns provides insight into their health, lifestyles and death and a chance to compare the two data sets. The casts themselves are important resources as they contain both skeletal remains and evidence of 19th- and 20th-century archaeological practice.

Another important legacy of the twentieth century was the presentation of Herculaneum to the public as an ‘open-air museum’, perhaps Europe’s first, with buildings reconstructed based on archaeological evidence and displays of original objects within the archaeological site. This concept of ‘open-air museum’ had already been adopted in some buildings in Pompeii, as a medium to communicate the meaning of ancient spaces, at the end of the 19th century.

The impressive remains of the towns of Pompeii and Herculaneum and their associated villas, destroyed and yet preserved by Mount Vesuvius, provide a complete and vivid picture of society and daily life at a specific moment in the past that is unparalleled elsewhere. The rediscovery and history of these places as archaeological sites has captured the collective imagination century after century, shaping archaeological, art historical, conservation and interpretation practices in Europe and beyond.

Criterion (iii): Pompeii and Herculaneum are the only Roman cities ruins preserved in such an exceptional way and have no parallels in integrity and extent in the world. The villas in Torre Annunziata have the best preserved wall paintings of the Roman period.

Criterion (iv): The sites of Pompeii, Herculaneum and Torre Annunziata provide a full picture of Roman life from the 1st century BC to the 1st century AD through the urban, architectural, decorative and daily life aspects that have been preserved. The villa A in Torre Annunziata is the most significant example of suburban villa of the Roman period.

Criterion (v): The sites of Pompeii, Herculaneum and Torre Annunziata are outstanding examples of urban and suburban Roman settlements. They also provide a vivid and comprehensive picture of Roman life at one precise moment: the eruption of Vesuvius in 79 AD.

Naples (Italian: Napoli; Neapolitan: Napule) in Italy, an ancient port on the Mediterranean sea. With just short of a million citizens, is the third most populous municipality. Metropolitan Naples is Italy’s second most populous metropolitan area. exchange between cultures. This is reflected in the city’s structure and monuments, which are a mixture of Greek, Roman, Norman, Angevin, Spanish and French architecture. The UNESCO evaluation committee described Naples’ historic centre – the largest in Europe – as being “of exceptional value”, and went on to say that Naples’ setting on its Bay “gives it an outstanding universal value which has had a profound influence”. But Italians have known these things for centuries: The view of Naples from the sea is so beautiful that a traditional Italian saying states that once you’ve seen it, you can die. As a testimony to its extraordinary history, the Naples region hosts an unparalleled concentration of UNESCO World Heritage sites: the Center of Naples itself; the Roman archaeological sites of Pompeii, Herculaneum, Cumae, Pozzuoli, Oplontis and Stabiae; the Royal Palace of Caserta; the royal site of San Leucio and the Aqueduct of Vanvitelli [read more].

Salerno (Neapolitan: Salièrno) is a city in Campania, Italy. Salerno is the principal town of the province with the same name, and has around 133,000 inhabitants (2014). For a brief period (February to August 1944) Salerno was the capital city of Italy, during the liberation after the allied landings before the fall of Monte Cassino to the allies and the subsequent liberation of Rome. Today it is a lively port town, that is rapidly re-acquiring a relaxing and open Mediterranean atmosphere. The port area is not particularly attractive, but once you get onto the promenade things get better. Worth a visit also is the Historical Old Town, which has recovered from being a virtual no-go area to being a well-preserved historical town centers, full of tiny little passageways and hidden corners. Salerno was the birthplace of the “Schola Medica Salernitana” in the 9th century, which was the most important source of medical information in Europe at the time, and provided an important impulse to medical learning in Europe [read more].