18th-Century Royal Palace at Caserta with the Park, the Aqueduct of Vanvitelli, and the San Leucio Complex 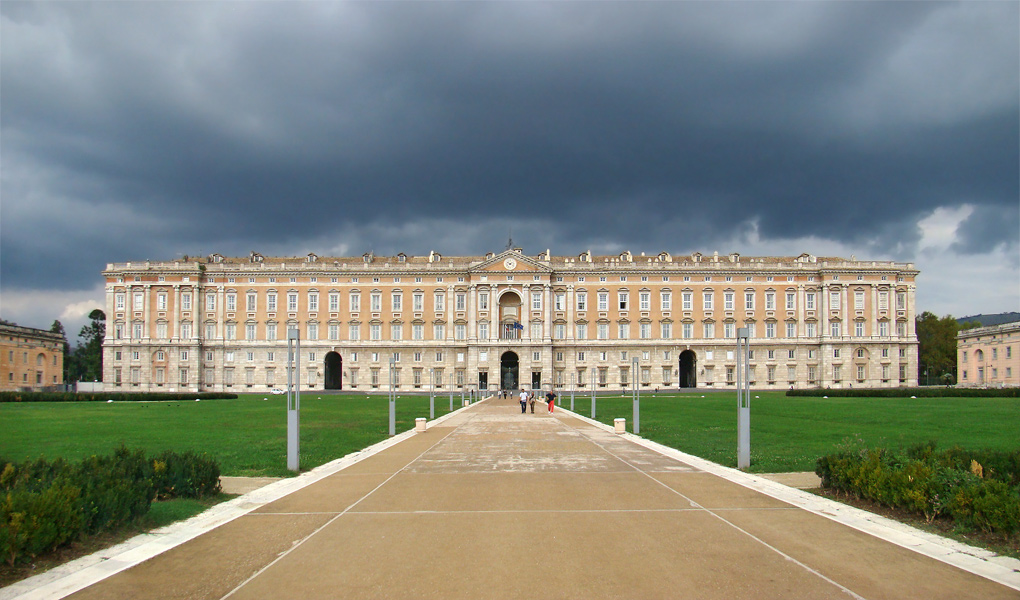 The monumental complex at Caserta, created by the Bourbon king Charles III in the mid-18th century to rival Versailles and the Royal Palace in Madrid, is exceptional for the way in which it brings together a magnificent palace with its park and gardens, as well as natural woodland, hunting lodges and a silk factory. It is an eloquent expression of the Enlightenment in material form, integrated into, rather than imposed on, its natural setting.

The extraordinary monumental complex of Caserta, in the north of Naples, was planned in the second half of the 18th century by the architect Luigi Vanvitelli, according to the wishes of Charles of Bourbon to rival Versailles and Madrid. It includes a sumptuous palace with a park, gardens and wooded area, as well as the Aqueduct Carolino and the industrial complex of San Leucio, built for the production of silk.

The Royal Palace is the centrepiece of the whole architectural composition and is located on a central axis which connects and unifies the entire complex. The portico and the stream of the fountains in the park which lead to the scenic backdrop of the waterfall, formed by the Aqueduct Carolino, are also situated along this axis.

With its four courtyards and three atriums, the Royal Palace is a great example of monumental structure built to be a magnificent palace for the royal family and its court and, at the same time, an administrative centre inspired by the model of Escorial in Spain.

The park is the latest of the great European gardens inspired by the creations of Versailles and the 16th century models of villas in Rome and Tuscany. The English Garden is one of the greatest, oldest and most important picturesque gardens created in Europe.

The main part of the San Leucio estate is the ancient hunting Lodge of the Belvedere, converted by King Ferdinando IV of Bourbon into a silk mill to create an idealistic community of workers, who were guaranteed homes, schools, medical care and all services. The huge building complex, set around the inner courtyards, became the symbol of a model society based on the value of work and equality.

The Aqueduct Carolino, with its imposing viaduct “Ponti della Valle” is a stunning work of engineering and provides an extraordinary infrastructure not only serving the palace, the gardens and the future capital of the kingdom, but also the mills, the ironworks and the manufacturing industries located along its path.

Criterion (i): The 18th century estate of Caserta is a unique creation of the spirit of the Enlightenment which was able to build buildings of great architectural value, well set in a natural landscape, according to a broad scale development plan.

Criterion (ii): The 18th century Royal Palace of Caserta with the park, the Aqueduct Carolino, and the complex of San Leucio are all important evidence of the interchange of human values, thanks to the broad scale of its original project for an ambitious new town, consisting of imposing buildings, gardens, streets and surrounding natural landscape according to an innovative concept of planning. This new configuration of the landscape has been realized through engineering works of exceptional historical interest, like the Aqueduct Carolino, which was created to connect and unify the entire complex.

Criterion (iii): The monumental complex of Caserta is an outstanding example of urban planning implemented by the Bourbon dynasty, according to Vitruvian principles of solidity, functionality and beauty in line with the neoclassical culture in vogue at the time.

Criterion (iv): The outstanding value of the industrial complex of Belvedere, planned to produce silk, derives from the idealistic principles underlying its original conception and management.

Naples (Italian: Napoli; Neapolitan: Napule) in Italy, an ancient port on the Mediterranean sea. With just short of a million citizens, is the third most populous municipality. Metropolitan Naples is Italy’s second most populous metropolitan area. exchange between cultures. This is reflected in the city’s structure and monuments, which are a mixture of Greek, Roman, Norman, Angevin, Spanish and French architecture. The UNESCO evaluation committee described Naples’ historic centre – the largest in Europe – as being “of exceptional value”, and went on to say that Naples’ setting on its Bay “gives it an outstanding universal value which has had a profound influence”. But Italians have known these things for centuries: The view of Naples from the sea is so beautiful that a traditional Italian saying states that once you’ve seen it, you can die. As a testimony to its extraordinary history, the Naples region hosts an unparalleled concentration of UNESCO World Heritage sites: the Center of Naples itself; the Roman archaeological sites of Pompeii, Herculaneum, Cumae, Pozzuoli, Oplontis and Stabiae; the Royal Palace of Caserta; the royal site of San Leucio and the Aqueduct of Vanvitelli [read more].

Salerno (Neapolitan: Salièrno) is a city in Campania, Italy. Salerno is the principal town of the province with the same name, and has around 133,000 inhabitants (2014). For a brief period (February to August 1944) Salerno was the capital city of Italy, during the liberation after the allied landings before the fall of Monte Cassino to the allies and the subsequent liberation of Rome. Today it is a lively port town, that is rapidly re-acquiring a relaxing and open Mediterranean atmosphere. The port area is not particularly attractive, but once you get onto the promenade things get better. Worth a visit also is the Historical Old Town, which has recovered from being a virtual no-go area to being a well-preserved historical town centers, full of tiny little passageways and hidden corners. Salerno was the birthplace of the “Schola Medica Salernitana” in the 9th century, which was the most important source of medical information in Europe at the time, and provided an important impulse to medical learning in Europe [read more].