China (Chongzuo, Nanning, Beihai).
Location: N22 15 20 E107 1 23
Date of Inscription: 2016
Criteria:
iii. to bear a unique or at least exceptional testimony to a cultural tradition or to a civilization which is living or which has disappeared;
vi. to be directly or tangibly associated with events or living traditions, with ideas, or with beliefs, with artistic and literary works of outstanding universal significance.
Property : 6,621.6 ha
Buffer zone: 12,149.01 ha
Ref: 1508 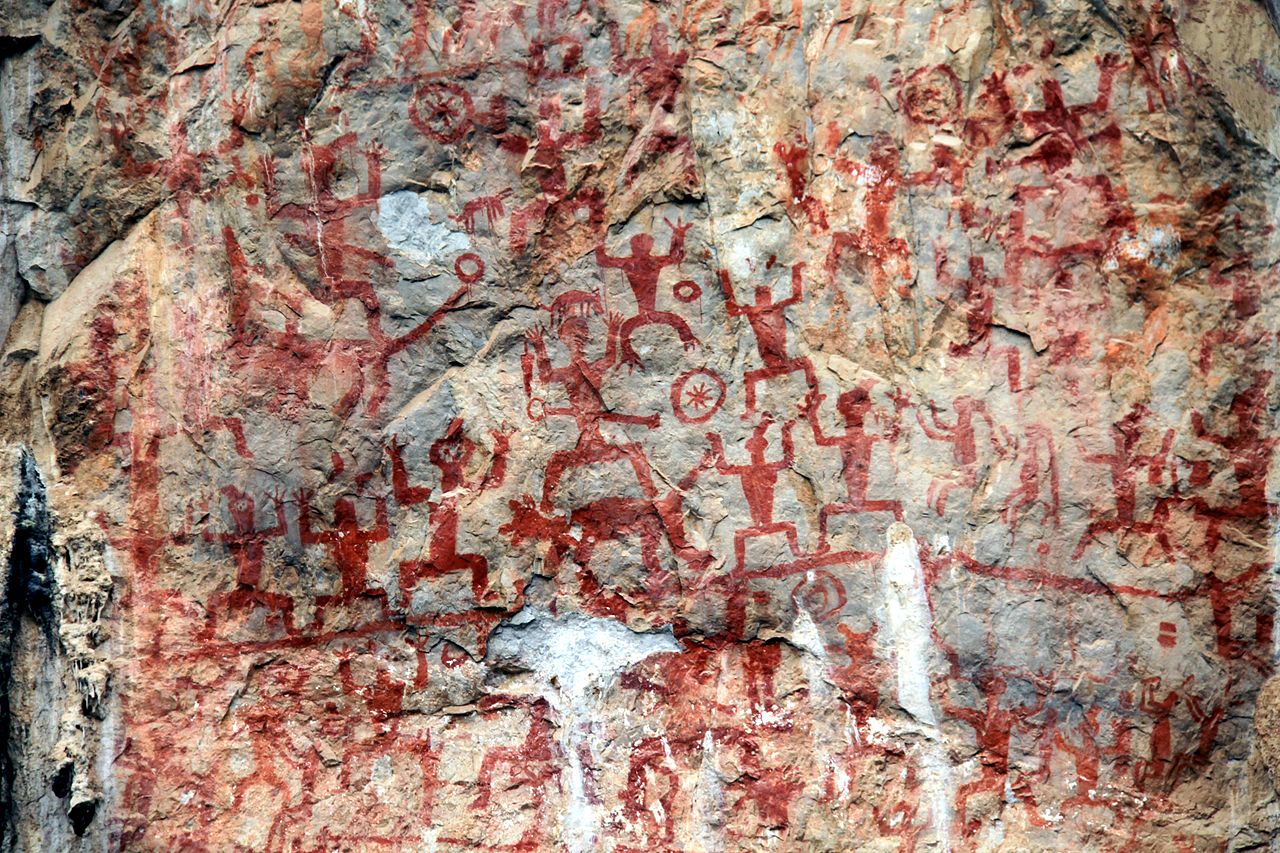 Etched and drawn on the steep cliffs and hidden mountains in the border regions of southwest China, these 38 sites of colorful rock art murals illustrate the life and rituals of the Luoyue people. They spanned for 700 years, from around the 5th century BCE to the 2nd century CE. In a surrounding landscape of karst, rivers and plateaux, they depict ceremonies that have been interpreted as portraying the bronze drum culture once prevalent across southern China. This landscape is the only relics to remain of this culture.

The Huashan Mountain cliffs facing the river form a concave wall. The Luoyue people who inhabited the Zuojiang river basin here created rock paintings on the high cliffs above the river bends. These immense reddish brown petroglyphs portray sacrificial ceremonies to gods and ancestors. The rock paintings, the cliffs themselves, Mingjiang River and the tableland opposite together compose a mystical and stirring cultural landscape.

Rock paintings are distributed throughout Zuojiang river basin in the riverine areas of Ningming, Longzhou, Chongzuo and other counties and cities. The paintings appear mainly on the wide, smooth and vertical cliffs where the rivers bend, and the Huashan Mountain rock paintings are the most representative.

The rock paintings have been executed through flat molding, or first projecting the monochromatic pattern and then painting them. Huashan Mountain cliff stands 345 meters above sea level and looks out over the Mingjiang River. The 221-meter-long, 140-meter-high cliffs bear groups of paintings, a total of 1,900, whose predominant feature is their 1,300 human figures. The pictures also include images of bronze drums, knives, swords, sheep-bells and beasts.

The main body of the picture consists of crude human figures, half squatting, their arms raised. The biggest is three meters tall, and the smallest 20 centimeters in height. Some are fully frontal, others in profile.

Each group of pictures generally includes a leader of giant stature standing at the center of a group, wearing a tiger cap and swords buckled to his side. He stands imposingly on a dog-like beast, presenting a froglike image when seen from the front. Those in profile are numerous, some semi-dressed and others naked, and present vital postures. Masses of smaller figures beat bronze drums, paddle dugout canoes, gather by the riverside and surround their leaders. They resemble a host of stars around the moon, seemingly in scenes of troops joining forces, holding celebrations or enjoying festivities. There are mono- and bi-layer circles surrounding some human figures, and “米” patterned circles inside others. Some appear as the sun or the moon and have a mystical ambience.

The paintings are in reddish brown, and from a distance look like patches of blood on the cliff face. Close up, the whole painting appears thickly dotted with mixed elements that give the concerted impression of an animated mystical hubbub. It thus forms a historical picture scroll portraying the power and grandeur of the ancient Luoyue people. It constitutes the essence of the Lingnan Painting Art and the foundation of its heritage.

Most of the paintings’ human figures are stretching out their arms on either side, their elbows bent upwards, in a half squatting stance. They appear to be mimicking frog postures. Frog worship was indeed an ancient Zhuang tradition, and the frog dance still exists. Bronze drums also appear in the paintings, and were important sacrificial vessels. Certain human figures display clear gender characteristics, including pregnant women and children, reflecting the fertility worship of the ancient Luoyue people.

The painting expresses joy, solemnity and reverence. If not a sacrificial ceremony, then it must be some kind of celebration. The ancient Luoyue people held grand festive celebrations simultaneously with sacrificial ceremonies, of which beating bronze drums and dancing frog dances were features. Certain experts believe it constitutes a paean in celebration of a victory against foreign invasions. Others perceive it as a prayer for a powerful army and prosperous society. There are also those who think it was the Luoyue people’s way of frightening river monsters away and praying for a good harvest. Different people thus have different opinions. It hence remains anyone’s guess.

The rock painting corridor at its core is rare both in China and throughout the world by virtue of the wide distribution of these difficultly executed, magnificent paintings. With profound artistic connotations and of major archaeological value, no matter what kind of scenes the paintings describe, they reflect scenes from the life of the ancient Luoyue people. They also express the people’s respect for heroes and eulogizing of power, as well as their good wishes for prosperity and favorable weather. It not only show us the artistic achievements of the ancient Luoyue people, ancestors of the Zhuang ethnic group, but also the richness of their social life millennia ago, and their diligence, courage and tenacity.

For years, experts have used scientific methods to detect the pigments used. They isolated the natural mineral hematite as a major component. But adhesive must have been added to the hematite powder, as otherwise the paintings could not have been executed on those hard, smooth and erect cliffs. After further analysis, adhesives were indeed found in the pigments.

The Carbon-14 dating method implies that the paintings were created 1,680 to 4,200 years ago. It subsequently underwent continuous improvement from the Warring States Period to the Han Dynasty, when this amazing masterpiece eventually came into being.