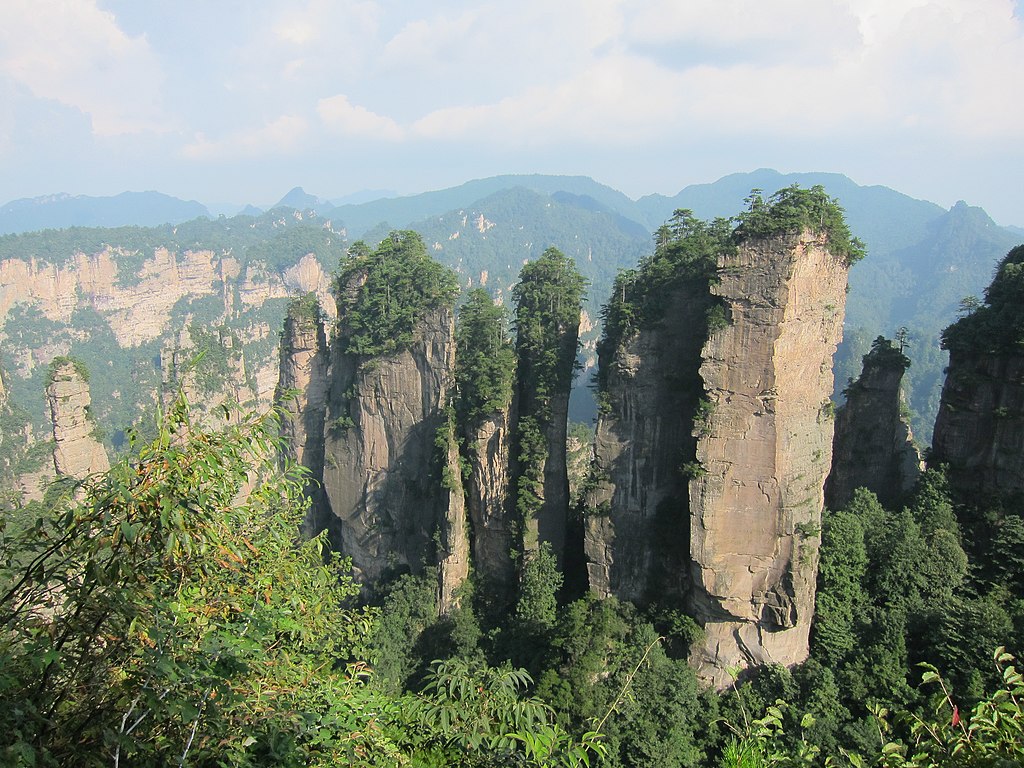 A spectacular area stretching over more than 26,000 ha in China’s Hunan Province, the site is dominated by more than 3,000 narrow sandstone pillars and peaks, many over 200 m high. Between the peaks lie ravines and gorges with streams, pools and waterfalls, some 40 caves, and two large natural bridges. In addition to the striking beauty of the landscape, the region is also noted for the fact that it is home to a number of endangered plant and animal species. 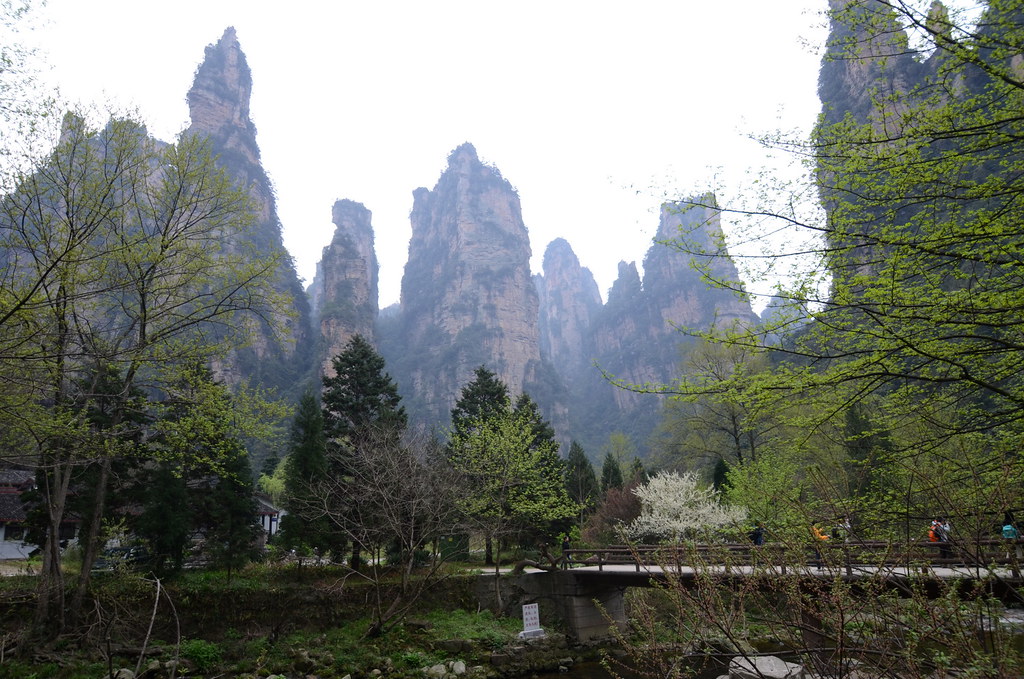 Wulingyuan is an island of nature within a heavily populated agricultural region. A spectacular area stretching some 26,400ha in China’s Hunan Province, the site is dominated by more than 3,000 narrow quartz sandstone pillars, many over 200m high. Nestled within its towering peaks lie ravines and gorges with streams, pools and waterfalls, two large natural bridges, and some 40 caves. Impressive calcite deposits are a notable feature within these caves. In addition to the striking beauty of the landscape, including spectacular jagged stone peaks, luxuriant vegetation cover and clear lakes and streams, the region is also home to a number of endangered plant and animal species.

Criterion (vii): The huge number of sandstone columns and peaks—more than 3,000—are spectacular. These, coupled with other land forms (natural bridges, ravines, waterfalls, streams, pools and caves) and dense broadleaf forest, present an aesthetically beautiful landscape enhanced by the mists and clouds which frequently shroud the site. There are more than 40 caves and two huge natural stone bridges, one of which rises 357 m above the valley floor.

At time of evaluation it was also noted that with additional information there could also be justification for inscribing this property under criterion (x), as the site provides important habitat for a number of threatened plant and animal species such as dhole, Asiatic black bear and Chinese water deer.

Zhangjiajie is a small provincial city in northwestern Hunan Province, China. It is significant for its proximity to Tianmen Mountain and Wulingyuan. The city’s name was Dayong until 1994, when it was renamed to link it to the Zhangjiajie National Forest Park (itself named after a tiny village now known as Zhangjiajie village or Zhangjiajie Cun). Zhangjiajie is the entry point for trips to two stunning nearby sites: Tianmen Mountain and Wulingyuan Scenic Area. There are also a number of less prominent natural attractions in the area. Taxis are cheap so they are probably your best bet within the city. A bus can take you out to Wulingyuan. Zhangjiajie Central Bus Station operates mini busses that will take you next to Zhangjiajie National Forest Park’s entrance. You do not need to buy a ticket at the Central Bus Station ticket window, simply go through security, keep to the left and make your way outside through Exit 1 [read more].

Changde is a city in Hunan. Changde is a ‘prefecture level city,’ which is to say a city with a large area surrounding it which is administered by the same local government. It is one of 13 prefecture level cities in Hunan province. Changde city proper, with a population of 1,232,182 (according to the 2010 census), is the largest city in the prefecture of Changde (which has a total population of 6 million). Changde city proper is made up of two districts, Wuling District and Dingcheng District. See The Poem Wall. Stretching for miles along the north bank of the river, this wall of poetry is beautiful even for those who can not read the characters. The wall is flanked by a riverside park and makes for a great place to walk and people watch. For a different perspective, stop by at night when the multicolored lights are on. Buxingjie (Walking Street). This is the most happening part of town and a good place to shop for the most fashionable attire that Changde has to offer [read more].

Yichang is a city in Hubei Province. The population of the Yichang area is around 4 million, with about one and a half million within the city itself and the remainder in the outside areas. The city is located just below the Three Gorges and around 30 km downstream from the dam. It used to be the gateway to the upper Yangze and an important post in the Sino-Japanese war, though not much of those times is visible anymore. Nowadays the city is known as the ending point of the Three Gorges river cruising trip and is less often used for a trip upstream. See Three Gorges Dam. The largest dam in the world. Three Visitors Cave and Park. The cave contains some poetry engraved in stone, not very big though but has a nice little story to it. The surrounding park has a view of the Yangze River as well as some old military defense walls, Sino-Japanese war memorial stones, a river viewing pavilion and some ancient city remains [read more].