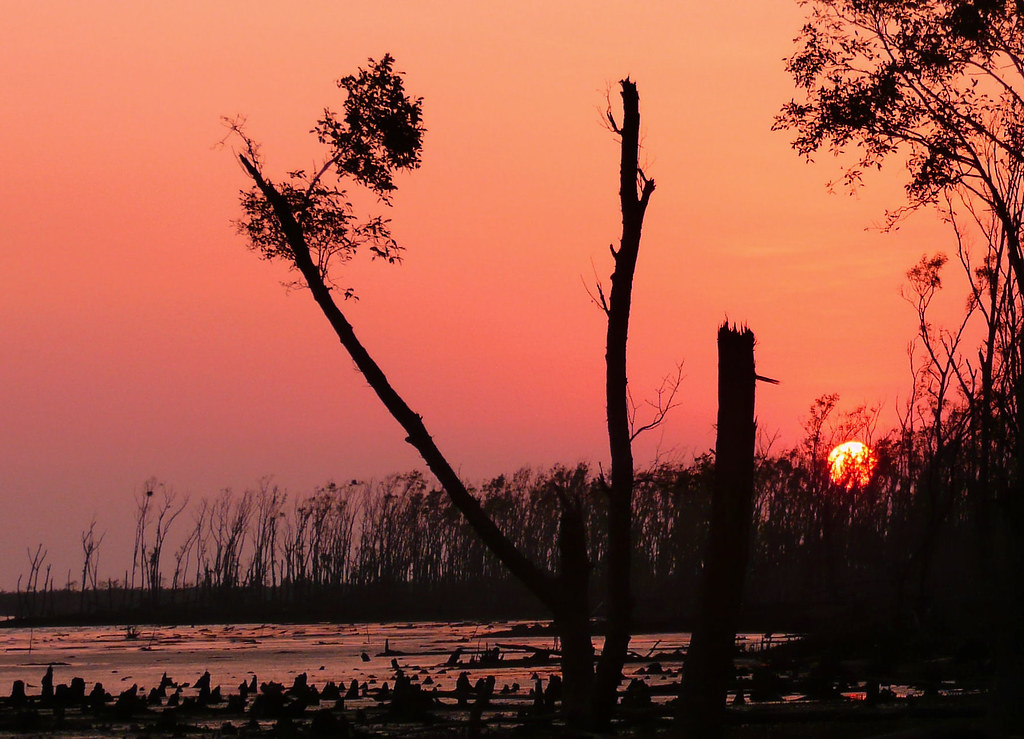 The Sundarbans mangrove forest, one of the largest such forests in the world (140,000 ha), lies on the delta of the Ganges, Brahmaputra and Meghna rivers on the Bay of Bengal. It is adjacent to the border of India’s Sundarbans World Heritage site inscribed in 1987. The site is intersected by a complex network of tidal waterways, mudflats and small islands of salt-tolerant mangrove forests, and presents an excellent example of ongoing ecological processes. The area is known for its wide range of fauna, including 260 bird species, the Bengal tiger and other threatened species such as the estuarine crocodile and the Indian python.

The three wildlife sanctuaries in the south cover an area of 139,700 ha and are considered core breeding areas for a number of endangered species. Situated in a unique bioclimatic zone within a typical geographical situation in the coastal region of the Bay of Bengal, it is a landmark of ancient heritage of mythological and historical events. Bestowed with magnificent scenic beauty and natural resources, it is internationally recognized for its high biodiversity of mangrove flora and fauna both on land and water.

The immense tidal mangrove forests of Bangladeshs’ Sundarbans Forest Reserve, is in reality a mosaic of islands of different shapes and sizes, perennially washed by brackish water shrilling in and around the endless and mind-boggling labyrinths of water channels. The site supports exceptional biodiversity in its terrestrial, aquatic and marine habitats; ranging from micro to macro flora and fauna. The Sundarbans is of universal importance for globally endangered species including the Royal Bengal Tiger, Ganges and Irawadi dolphins, estuarine crocodiles and the critically endangered endemic river terrapin (Batagur baska).  It is the only mangrove habitat in the world for Panthera tigris tigris species.

Criterion (ix): The Sundarbans provides a significant example of on-going ecological processes as it represents the process of delta formation and the subsequent colonization of the newly formed deltaic islands and associated mangrove communities. These processes include monsoon rains, flooding, delta formation, tidal influence and plant colonization. As part of the world’s largest delta, formed from sediments deposited by three great rivers; the Ganges, Brahmaputra and Meghna, and covering the Bengal Basin, the land has been moulded by tidal action, resulting in a distinctive physiology.

Criterion (x): One of the largest remaining areas of mangroves in the world, the Sundarbans supports an exceptional level of biodiversity in both the terrestrial and marine environments, including significant populations of globally endangered cat species, such as the Royal Bengal Tiger. Population censuses of Royal Bengal Tigers estimate a population of between 400 to 450 individuals, a higher density than any other population of tigers in the world.

The property is the only remaining habitat in the lower Bengal Basin for a wide variety of faunal species. Its exceptional biodiversity is expressed in a wide range of flora; 334 plant species belonging to 245 genera and 75 families, 165 algae and 13 orchid species. It is also rich in fauna with 693 species of wildlife which includes; 49 mammals, 59 reptiles, 8 amphibians, 210 white fishes, 24 shrimps, 14 crabs and 43 mollusks species. The varied and colourful bird-life found along the waterways of the property is one of its greatest attractions, including 315 species of waterfowl, raptors and forest birds including nine species of kingfisher and the magnificent white-bellied sea eagle.

Khulna is the main city in Khulna Division in Bangladesh. On the bank of Rupsha (and Bhairav) river, it is known as the industrial city and located in southern part of Bangladesh. A large part of the Sundarbans, a UNESCO world heritage is located in Khulna. It has many Jute mills, the only newsprint mill and hardboard mill of Bangladesh, the only state-owned match factory (Dada match, later Dhaka match), Oxygen company (BOL), Ship yard. Khulna is the 4th largest city in Bangladesh after Dhaka,Chittagong and Comilla. It is a quiet, calm city inhabited by 1.5 million people. Cycle-rickshaws are the main method of transport. From the bus stand to the center or from one end of town to the other shouldn’t run more than about Tk10, and as little as Tk4 for shorter journeys. It is also possible to rent a scooter (3 wheel) for little longer journeys. [read more]

Barisal is the capital of Barisal Division in southern Bangladesh. Southern city and divisional town of Barisal division. Barisal is famous for paddy growing & many small and big rivers. The town is busy like most others in Bangladesh. Mobile phone service is well established, with good 3G connections. During the Pakistan period Barisal division was a district under the same name and was part of Khulna Division then as one of four divisions of East Pakistan. Though buses are available, the boat journey from Dhaka is recommended. It takes 12 hours and is comfortable and enjoyable. By road in a hired car, the journey from Dhaka takes 6-8 hours, requiring a half hour ferry crossing. [read more]

Dhaka (formerly Dacca in English) is the capital and largest city of Bangladesh. It is the largest city by population in the historical region of Bengal and a major city in South Asia. Dhaka emerged as a cosmopolitan city during the Mughal Empire. It is a hub for trade and culture, with a long history as a Bengali capital. It has been called the City of Mosques and the Venice of the East, due to its Islamic architecture and a riverfront facing the Buriganga (Old Ganges). It is also known as the Rickshaw Capital of the World, as there are over 500,000 cycle rickshaws running on its roads. Although it is described as a concrete jungle, Dhaka has venerable green spaces, including many gardens and parks. Today, Dhaka is South Asia’s second most populous capital after Delhi and an important financial center alongside Mumbai and Karachi. [read more]