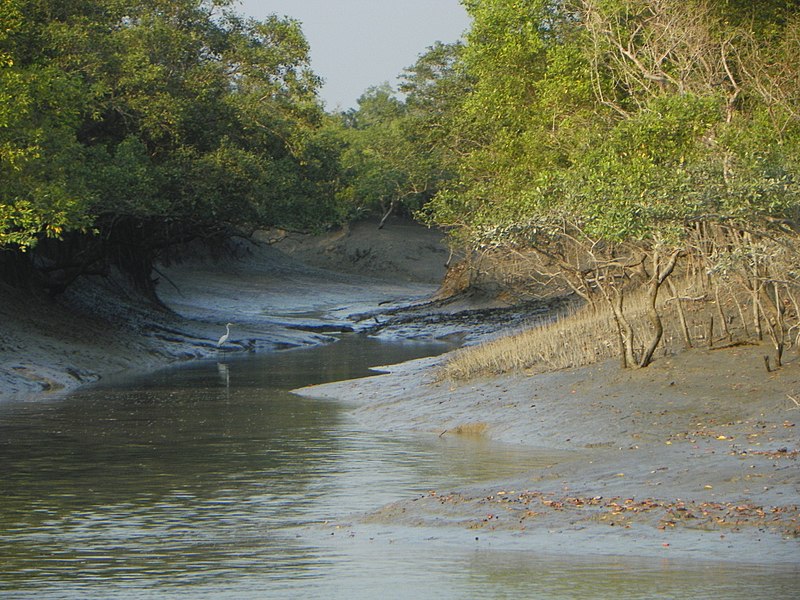 The Sundarbans covers 10,000 km2 of land and water (more than half of it in India, the rest in Bangladesh) in the Ganges delta. It contains the world’s largest area of mangrove forests. A number of rare or endangered species live in the park, including tigers, aquatic mammals, birds and reptiles. 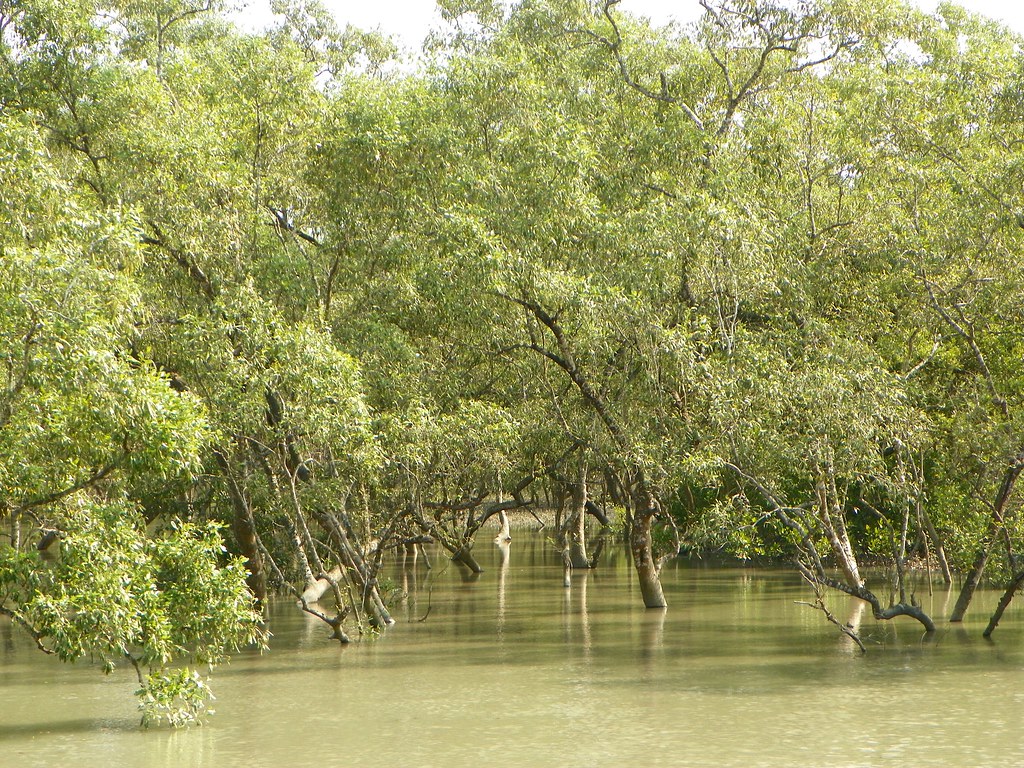 The Sundarbans contain the world’s largest mangrove forests and one of the most biologically productive of all natural ecosystems. Located at the mouth of the Ganges and Brahmaputra Rivers between India and Bangladesh, its forest and waterways support a wide range of’ fauna including a number of species threatened with extinction. The mangrove habitat supports the single largest population of tigers in the world which have adapted to an almost amphibious life, being capable of swimming for long distances and feeding on fish, crab and water monitor lizards. They are also renowned for being “man-eaters”, most probably due to their relatively high frequency of encounters with local people.

The islands are also of great economic importance as a storm barrier, shore stabiliser, nutrient and sediment trap, a source of timber and natural resources, and support a wide variety of aquatic, benthic and terrestrial organisms. They are an excellent example of the ecological processes of monsoon rain flooding, delta formation, tidal influence and plant colonisation. Covering 133,010 ha, the area is estimated to comprise about 55% forest land and 45% wetlands in the form of tidal rivers, creeks, canals and vast estuarine mouths of the river. About 66% of the entire mangrove forest area is estimated to occur in Bangladesh, with the remaining 34% in India.

Criterion (ix): The Sundarbans is the largest area of mangrove forest in the world and the only one that is inhabited by the tiger. The land area in the Sundarbans is constantly being changed, moulded and shaped by the action of the tides, with erosion processes more prominent along estuaries and deposition processes along the banks of inner estuarine waterways influenced by the accelerated discharge of silt from sea water. Its role as a wetland nursery for marine organisms and as a climatic buffer against cyclones is a unique natural process.

Criterion (x): The mangrove ecosystem of the Sundarbans is considered to be unique because of its immensely rich mangrove flora and mangrove-associated fauna. Some 78 species of mangroves have been recorded in the area making it the richest mangrove forest in the world. It is also unique as the mangroves are not only dominant as fringing mangroves along the creeks and backwaters, but also grow along the sides of rivers in muddy as well as in flat, sandy areas.

The Sundarbans support a wealth of animal species including the single largest population of tiger and a number of other threatened aquatic mammals such as the Irrawaddy and Ganges River dolphins. The site also contains an exceptional number of threatened reptiles including the king cobra and significant populations of the endemic river terrapin which was once believed to be extinct. The property provides nesting grounds for marine turtles including the olive riley, green and hawksbill. Two of the four species of highly primitive horseshoe crab (Tachypleus gigas and Carcinoscorpius rotundicauda) are found here. The Sajnakhali area, listed as an Important Bird Area, contains a wealth of waterfowl and is of high importance for migratory birds.

Baruipur is a city and a municipality of the South 24 Parganas district in the Indian state of West Bengal. It is a part of the area covered by the Kolkata Metropolitan Development Authority (KMDA). It is the headquarters of the Baruipur subdivision and Baruipur police district. Baruipur subdivision is a rural subdivision with moderate levels of urbanization. 31.05% of the population lives in the urban areas and 68.95% lives in the rural areas. In the southern portion of the subdivision there are 20 census towns. The entire district is situated in the Ganges Delta and the southern part is covered by the Baruipur-Jaynagar Plain. Archaeological excavations at Dhosa and Tilpi, on the bank of the Piyali River indicate the existence of human habitation around 2,000 years ago. Baruipur is on the State Highway 1. Baruipur Junction railway station is on the Sealdah–Namkhana line of the Kolkata Suburban Railway system. With the electrification of the railways, suburban traffic has grown tremendously since the 1960s [read more].

Kolkata (formerly Calcutta) is the capital of West Bengal and one of the largest urban agglomerations in India. It is the largest city in Eastern India. Kolkata is an ‘in your face’ city that shocks and charms the unsuspecting visitor. Long known as the cultural capital of India and home to the so-called Bengal Renaissance, ‘The City of Joy’ (the sobriquet became more famous after the publication of a novel of the same name on the city’s struggle against poverty and corruption written by Dominique Lapiere; later made into a Roland Joffe film) continues to spawn generations of poets, writers, film directors and Nobel Prize winners. If your trip only allows for a visit of one or two of India’s metropolitan cities, then definitely consider placing Kolkata on your itinerary. Kolkata is arguably one of the most socially, culturally and politically progressive cities in India. Love it or hate it, you definitely won’t forget the ‘City of Joy’ [read more].

Howrah is a city in Southeast Bengal in India, west of Kolkata, across the Hooghly River. Howrah officially is a city on its own but in fact it has long grown into one huge urban agglomeration together with Kolkata. Howrah is located on the western bank of the Hooghly river. Kolkata downtown is just across the river, and probably the reason one’s here in the first place. To zip around between Kolkata and Howrah the ferry services to cross the river Hooghly is very convenient. There are a number of jetties. On the Kolkata side the ferries link to such jetties as Bagbazar, Armenian, Fairlie, Chandpalghat, Babughat, Princepghat. On the Howrah side there are jetties at Howrah Station, Ramkrishnapur Ghat, Botanical Garden Ghat, Bandhaghat, Golabari and Belur Math. Buy the ticket before you board the ferry and retain the ticket till after you have crossed to the other side and have shown it to the ticket checker near the exit gate or else you will be penalized [read more]!