On the shores of the Bay of Bengal, bathed in the rays of the rising sun, the temple at Konarak is a monumental representation of the sun god Surya’s chariot; its 24 wheels are decorated with symbolic designs and it is led by a team of six horses. Built in the 13th century, it is one of India’s most famous Brahman sanctuaries. 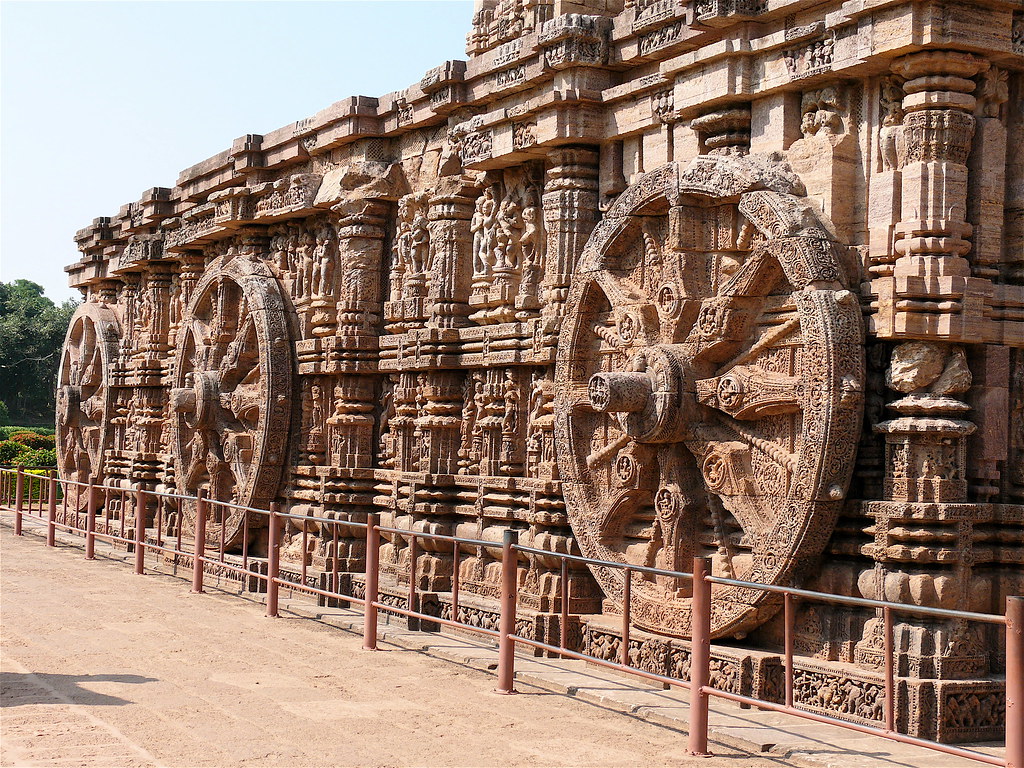 The Sun Temple at Konârak, located on the eastern shores of the Indian subcontinent, is one of the outstanding examples of temple architecture and art as revealed in its conception, scale and proportion, and in the sublime narrative strength of its sculptural embellishment. It is an outstanding testimony to the 13th-century kingdom of Orissa and a monumental example of the personification of divinity, thus forming an invaluable link in the history of the diffusion of the cult of Surya,the Sun God. In this sense, it is directly and materially linked to Brahmanism and tantricbelief systems. The Sun Temple is the culmination of Kalingan temple architecture, with all its defining elements in complete and perfect form. A masterpiece of creative genius in both conception and realisation, the temple represents a chariot of the Sun God, with twelve pairs of wheels drawn by seven horses evoking its movement across the heavens. It is embellished with sophisticated and refined iconographical depictions of contemporary life and activities. On the north and south sides are 24 carved wheels, each about 3 m in diameter, as well as symbolic motifs referring to the cycle of the seasons and the months. These complete the illusionary structure of the temple-chariot. Between the wheels, the plinth of the temple is entirely decorated with reliefs of fantastic lions, musicians and dancers, and erotic groups. Like many Indian temples, the Sun Temple comprises several distinct and well-organized spatial units. The vimana (principal sanctuary) was surmounted by a high tower with a shikhara (crowning cap), which was razed in the 19th century. To the east, the jahamogana (audience hall) dominates the ruins with its pyramidal mass. Farther to the east, the natmandir (dance hall), today unroofed, rises on a high platform. Various subsidiary structures are still to be found within the enclosed area of the rectangular wall, which is punctuated by gates and towers.The Sun Temple is an exceptional testimony, in physical form, to the 13th-century Hindu Kingdom of Orissa, under the reign of Narasimha Deva I (AD 1238-1264). Its scale, refinement and conception represent the strength and stability of the Ganga Empire as well as the value systems of the historic milieu. Its aesthetical and visually overwhelming sculptural narratives are today an invaluable window into the religious, political, social and secular life of the people of that period. The Sun Templeis directly associated with the idea and belief of the personification of the Sun God, which is adumbrated in the Vedas and classical texts. The Sun is personified as a divine being with a history, ancestry, family, wives and progeny, and as such, plays a very prominent role in the myths and legends of creation. Furthermore, it is associated with all the legends of its own artistic creation – the most evocative being its construction over twelve years using 1,200 artisans – and the stories about the deep commitment of its master builder, Bisu Moharana, to the project, in which his son (who was born during this period) later became involved. Konârak’s location and name are important testimonies to all the above associations, and its architectural realisation is associated with the living traditions of Brahmanismand tantricpractices.

Criterion (i): A unique artistic achievement, the temple has raised up those lovely legends which are affiliated everywhere with absolute works of art: its construction caused the mobilization of 1,200 workers for 12 years. The architect, Bisu Moharana, having left his birthplace to devote himself to his work, became the father of a son while he was away. This son, in his turn, became part of the workshop and after having constructed the cupola of the temple, which his father was unable to complete, immolated himself by jumping into space.

Criterion (iii):  Konârak is an outstanding testimony to the 13th-century kingdom of Orissa.

Criterion (vi):  Directly and materially linked to the Brahman beliefs, Konârak is the invaluable link in the history of the diffusion of the cult of Surya, which originating in Kashmir during the 8th century, finally reached the shores of Eastern India.

Puri, also known as Jagannath Puri (The Abode of Lord Jagannath) or Purusottama Puri, is a renowned city and headquarters of Puri District in the Indian state of Odisha (formerly Orissa). Jagannath Puri or Purusottama Puri (approximately 1 and a half hours or 60 km from Bhubaneswar by bus (about ₹ 130), about 2 hours by train) is a pilgrimage town with the famous temple of Lord Jagannath (means Lord of the Universe) and is a major tourist destination with all its beautiful and pleasant sights. There are many hotels, most overseas tourists stay near to the beach. The Sun temple at Konark is also nearby. If you go to Puri by road from Bhubaneswar you will go past Pipli with its beautiful applique handicrafts, worth a look. The Puri sea beach is a major attraction with its fantastic sea face view and golden sand, the water is a bit rough… [read more].

Bhubaneswar, the capital of the East Indian state of Odisha, lies in its coastal region. Together with Konark and Puri, it forms the Swarna Tribhuja or Golden Triangle of Odisha tourism. This ancient city makes an ideal starting point for the traveller who wishes to explore the magnificence of Kalinga architecture, worship at its grand temples or enjoy the beaches of Puri. Bhubaneswar is 30 km from Cuttack, the commercial capital of Odisha. It is also an important business centre in its own right. Bhubaneswar is also the seat of State assembly. It is considered one of the fast growing cities in India, with its Manufacturing and Information technology advancements. With more than 100 educational institutes in the city, Bhubaneswar is also very popular for students from Eastern part of India. Odia is the most common language spoken with in the city. However, with a culture shifting towards cosmopolitan manner, Hindi and… [read more].

Cuttack is a city in the state of Odisha (formerly known as Orissa) in India. Cuttack is also referred to as the Millenium City of Odisha and the Silver City because of its history of 1000 years and because it is world famous for its silver filigree work. It is also referred to as the business capital of the state. It was the previous capital of Odisha until the state government shifted base to Bhubaneshwar in 1948. Now, it is a modern city but with lots of old traditions attached to it; Cuttack has a perfect combination of traditional and modern lifestyle. Seeing places in Cuttack depends on the time of the year. Summers temperatures can reach as high as 49 degrees celsius. If you arrive in autumn (September to November) you can see this city showing its cultural tradition, at the time of most of the festivals. Easily the second largest… [read more].