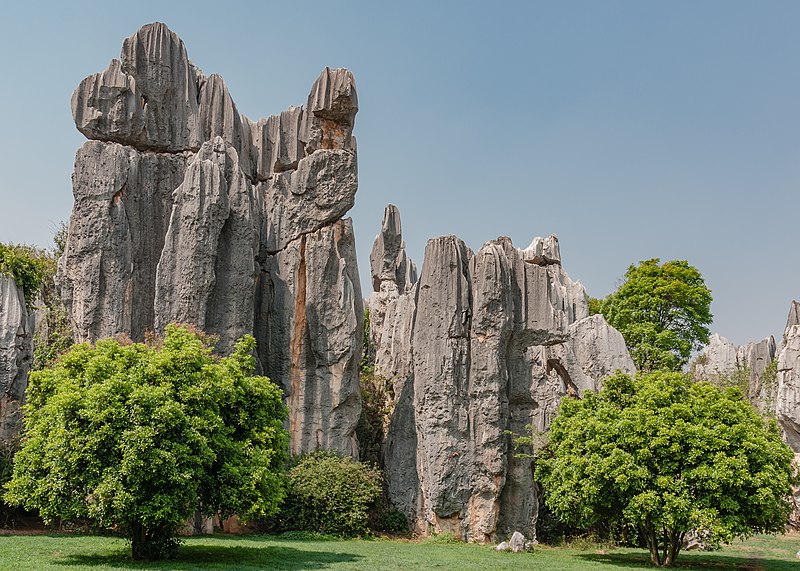 South China Karst is one of the world’s most spectacular examples of humid tropical to subtropical karst landscapes. It is a serial site spread over the provinces of Guizhou, Guangxi, Yunnan and Chongqing and covers 97,125 hectares. It contains the most significant types of karst landforms, including tower karst, pinnacle karst and cone karst formations, along with other spectacular characteristics such as natural bridges, gorges and large cave systems. The stone forests of Shilin are considered superlative natural phenomena and a world reference. The cone and tower karsts of Libo, also considered the world reference site for these types of karst, form a distinctive and beautiful landscape. Wulong Karst has been inscribed for its giant dolines (sinkholes), natural bridges and caves.

The huge karst area of South China is about 550,000 km2 in extent. The karst terrain displays a geomorphic transition as the terrain gradually descends about 2000 meters over 700 kilometers from the western Yunnan-Guizhou Plateau (averaging 2100 meters elevation) to the eastern Guangxi Basin (averaging 110 meters elevation). The region is recognized as the world’s type area for karst landform development in the humid tropics and subtropics.

The South China Karst World Heritage property protects a diversity of spectacular and iconic continental karst landscapes, including tower karst (fenglin), pinnacle karst (shilin) and cone karst (fengcong), as well as other karst phenomena such as Tiankeng karst (giant dolines), table mountains and gorges. The property also includes many large cave systems with rich speleothem deposits. The karst features and geomorphological diversity of the South China Karst are widely recognized as among the best in the world. The region can be considered the global type-site for three karst landform styles: fenglin (tower karst), fengcong (cone karst), and shilin (stone forest or pinnacle karst).The landscape also retains most of its natural vegetation, which results in seasonal variations and adds to the outstanding aesthetic value of the area.

The property contains the most spectacular, scientifically significant and representative series of karst landforms and landscapes of South China from interior high plateau to lowland plains and constitutes the world’s premier example of humid tropical to subtropical karst: one of our planet’s great landscapes. It complements sites that are also present in neighbouring countries, including Viet Nam, where several World Heritage properties also exhibit karst formations.

Criterion (vii): The South China Karst World Heritage property includes spectacular karst features and landscapes, which are both exceptional phenomena, and of outstanding aesthetic quality. It includes the stone forests of Shilin, superlative natural phenomena which include the Naigu stone forest occurring on dolomitic limestone and the Suyishan stone forest arising from a lake, the remarkable fengcong and fenglin karsts of Libo, and the Wulong Karst, which includes giant collapse depressions, called Tiankeng, and exceptionally high natural bridges between them, with long stretches of deep unroofed caves.

Criterion (viii): The South China Karst World Heritage property reveals the complex evolutionary history of one of the world’s most outstanding landscapes. Shilin and Libo are global reference areas for the karst features and landscapes that they exhibit. The stone forests of Shilin developed over 270 million years during four major geological time periods from the Permian to present, illustrating the episodic nature of the evolution of these karst features. Libo contains carbonate outcrops of different ages shaped over millions of years by erosive processes into impressive Fengcong and Fenglin karsts. Libo also contains a combination of numerous tall karst peaks, deep dolines, sinking streams and long river caves. Wulong represents high inland karst plateaus that have experienced considerable uplift, with giant dolines and bridges. Wulong’s landscapes contain evidence for the history of one of the world’s great river systems, the Yangtze and its tributaries. Huanjiang Karst is an extension of the Libo Karst component. Together the two sites provide an outstanding example of fengcong karst and also preserve and display a rich diversity of surface and underground karst features.

Guilin Karst is considered the best known example of continental fenglin and provides a perfect geomorphic expression of the end stage of karst evolution in South China. Guilin is a basin at a relatively low altitude and receives abundant allogenic (rainfed) water from surrounding hills, leading to a fluvial component that aids fenglin development, resulting in fenglin and fengcong karst side-by-side over a large area. Scientific study of karst development in the region has resulted in the generation of the ‘Guilin model’ of fengcong and fenglin karst evolution. Shibing Karst provides a spectacular fengcong landscape, which is also exceptional because it developed in relatively insoluble dolomite rocks. Shibing also contains a range of minor karst features including karren, tufa deposits and caves. Jinfoshan Karst is a unique karst table mountain surrounded by massive towering cliffs. It represents a piece of dissected plateau karst isolated from the Yunnan-Guizhou-Chonqing plateau by deep fluvial incision. An ancient planation surface remains on the summit, with an ancient weathering crust. Beneath the plateau surface are dismembered horizontal cave systems that appear at high altitude on cliff faces. Jinfoshan records the process of dissection of the high elevation karst plateau and contains evidence of the region’s intermittent uplift and karstification since the Cenozoic. It is a superlative type-site of a karst table mountain.

Chongqing (Chóngqìng, formerly spelled Chungking) is fast becoming the most economically important city in the interior West China, with an urban population of around 8.8 million. In addition to the central urban area, the municipality of Chongqing also includes some 80,000 km² (31,000 sq mi) of the neighboring countryside and smaller towns, with approximately 30 million people altogether. Chongqing is also the launching point for scenic boat trips down the Yangtze River through the Three Gorges Dam. The spectacular Buddhist Dazu Rock Carvings are three hours west of Chongqing City in the outlying Chongqing Municipality and are listed as an UNESCO World Heritage Site. Chongqing is notorious for its hot and humid weather. The air quality, winter or summer, can be challenging to people with respiratory problems due to massive amounts of smog. Chongqing has been ranked by the World Bank as one of the most polluted cities in the world. Chongqing is one of the four municipalities in China, the cities that are not part of a province but report directly to the national government; it is the only municipality that is not on the east coast, (the others are Beijing, Shanghai and Tianjin) [read more].

Kunming (Kūnmíng) is the capital of Yunnan Province in China. Known in China as the City of Eternal Spring, Kunming is at an almost-tropical latitude but with a 2000 m (6600 ft) altitude, which gives it a very temperate climate. However, in winter it has been known to snow, so if visiting in December–February, pack warm. Also, when it rains – it’s cold. The air is also quite clean compared to other Chinese cities, even though the traffic-congested streets still emit more than their fair share of pollution. The population of the prefecture of Kunming is now close to 10 million and the city is expanding rapidly, with numerous highways and modern buildings. Largely because of the fine climate, flower-growing is a major industry; tourist attractions include flower exhibits and auctions and a huge botanical garden. In addition to its own charms, Kunming serves as a base from which to explore Yunnan province [read more].

Guiyang (Guìyáng) is the capital of Guizhou province, China. While not the most spectacular of Chinese cities, it has much to offer as an introduction to the history, culture and natural splendor of Guizhou and China’s southwest. Moreover, it is drastically cheaper than the more touristed and developed provinces. It makes an excellent base for exploring mountains, caves, rivers, and minority cultures (including traditional Han Chinese culture lost in many areas) of the province. See (Central Guiyang) Guanshan Lake Park. Guanshanhu Park is a forested park that lies 12 km from Guiyang’s city center. It lies around a pair of lakes, Guanshan North and South Lakes, and has a main paved path around them.There are also smaller paths that lead to scenic spots. In the center of the park, you can find an 18-meter-tall golden pheasant drum statue, representing luck and happiness. On the opposite side of the lake, there is a 30-meter statue of a trio of hot peppers, or lajiao, an integral ingredient in Guizhou cuisine [read more].