The Bandstand, a historic gazebo in the Botanic Gardens (Calvin Teo/Wikipedia, CC BY-SA 3.0).

Situated at the heart of the city of Singapore, the site demonstrates the evolution of a British tropical colonial botanic garden that has become a modern world-class scientific institution used for both conservation and education. The cultural landscape includes a rich variety of historic features, plantings and buildings that demonstrate the development of the garden since its creation in 1859. It has been an important centre for science, research and plant conservation, notably in connection with the cultivation of rubber plantations, in Southeast Asia since 1875. 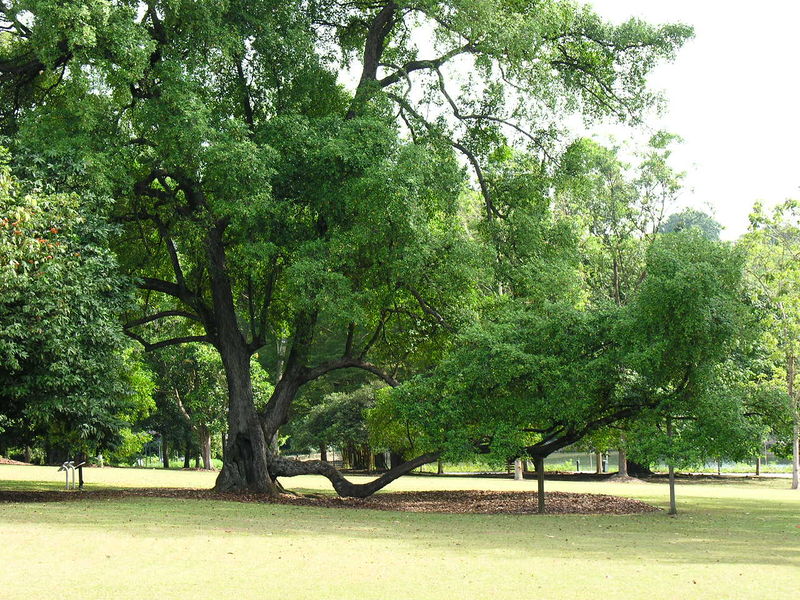 The Singapore Botanic Gardens is situated at the heart of the city of Singapore and demonstrates the evolution of a British tropical colonial botanic garden from a ‘Pleasure Garden’ in the English Landscape Style, to a colonial Economic Garden with facilities for horticultural and botanical research, to a modern and world-class botanic garden, scientific institution and place of conservation, recreation and education. The Singapore Botanic Gardens is a well-defined cultural landscape which includes a rich variety of historic landscape features, plantings and buildings that clearly demonstrate the evolution of the Botanic Gardens since its establishment in 1859. Through its well-preserved landscape design and continuity of purpose, the Singapore Botanic Gardens is an outstanding example of a British tropical botanic garden which has also played a key role in advances in scientific knowledge, particularly in the fields of tropical botany and horticulture, including the development of plantation rubber.

Criterion (ii): The Singapore Botanic Gardens has been a centre for plant research in Southeast Asia since the 19th century, contributing significantly to the expansion of plantation rubber in the 20th century, and continues to play a leading role in the exchange of ideas, knowledge and expertise in tropical botany and horticultural sciences. While the Kew Botanic Gardens (United Kingdom) provided the initial seedlings, the Singapore Botanic Gardens provided the conditions for their planting, development and distribution throughout much of Southeast Asia and elsewhere.

Criterion (iv): The Singapore Botanic Gardens is an outstanding example of a British tropical colonial botanic garden, and is notable for its preserved landscape design and continuity of purpose since its inception.

Bedok is a planning area and matured residential town located in the geographical region of Tanah Merah along the south-eastern coast of the East Region of Singapore. Population wise, Bedok is the largest planning area in the Republic, being home to an estimated 289,000 residents. This high demographic is largely explained by the affordable public housing in Bedok New Town, due to its relatively distant location from the Central Area. Besides public housing developments, private residences are also prevalent in the area, most of which are found in the neighbourhoods of Bayshore, Frankel Avenue and Siglap, in western and southwestern Bedok. Apart from the maritime boundary that the area shares with the Singapore Strait to the south and southeast, Bedok is also bounded by five other planning areas: Paya Lebar to the north, Hougang to the northwest, Tampines to the northeast and east, Geylang to the west and Marine Parade to the southwest [read more].

Jurong West is a planning area and residential town located in the West Region of Singapore. Jurong West shares boundaries with Tengah in the north, Jurong East in the east, Boon Lay and Pioneer in the south, and Western Water Catchment in the west. Originally a forested area, Jurong West is undergoing rapid development under the ambition of the Housing and Development Board (HDB) to transform it into a fully mature housing estate. Jurong West originated from the area once called Peng Kang, named after the gambier plantations along Sungei Jurong. By the mid-20th century, the area was home to several brickworks, palm oil plantations and nurseries. At that time, the only public housing estates in Jurong West were Boon Lay and Taman Jurong. Jurong West was largely left alone until 1984, when the HDB began conceptualisation for a new town in Jurong West. Jurong West was carved into nine subzones that would house a total of 94,000 public and private housing units in the long term [read more].

Tampines is a planning area and residential town in the geographical region of Tanah Merah located along the south-eastern coast of the East Region of Singapore. The planning area is bordered by Bedok and Paya Lebar to the west, Pasir Ris to the north, Changi to the east and the Singapore Straits to the south. Tampines New Town is located in the northern portion of Tampines planning area. Tampines is the third largest new town in Singapore by area, covering over 2089 hectares of land and also is the third most populated new town, following Bedok and Jurong West. It is the regional centre for the East Region. In the past, Tampines was covered by forests, swamp and sand quarries. Ironwood trees, or tempinis in Malay, grew abundantly. The area was part of a military training area until about 1987. The name Tampines goes back to the Franklin and Jackson map of 1828 [read more].