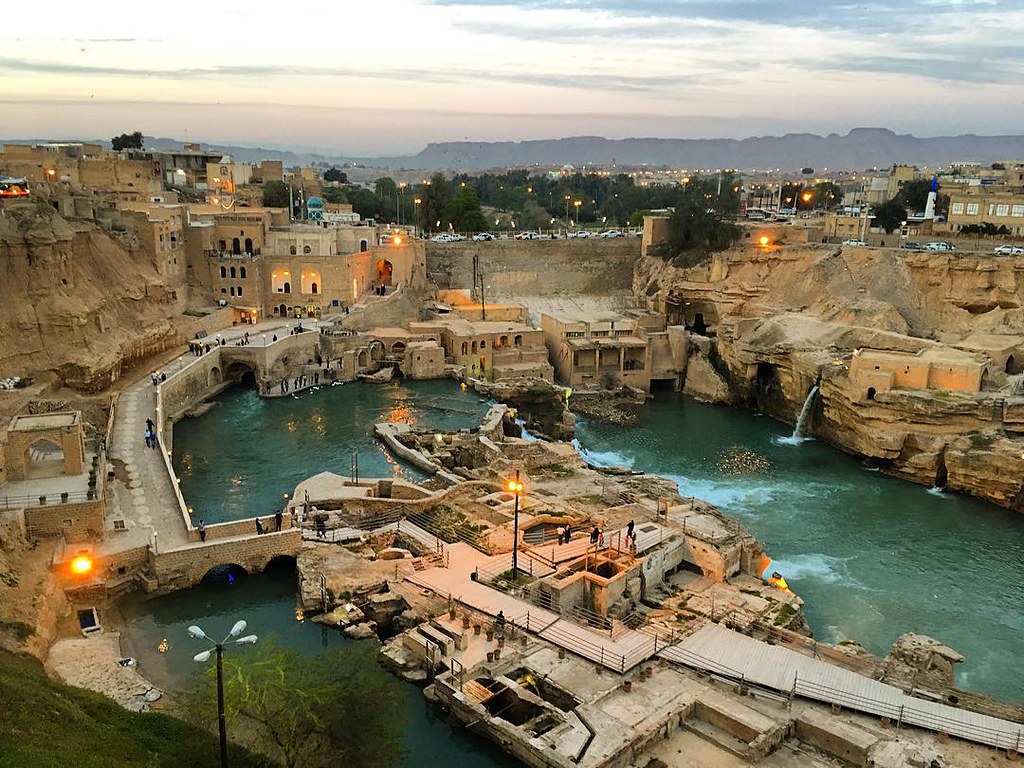 Shushtar, Historical Hydraulic System, inscribed as a masterpiece of creative genius, can be traced back to Darius the Great in the 5th century B.C. It involved the creation of two main diversion canals on the river Kârun one of which, Gargar canal, is still in use providing water to the city of Shushtar via a series of tunnels that supply water to mills. It forms a spectacular cliff from which water cascades into a downstream basin. It then enters the plain situated south of the city where it has enabled the planting of orchards and farming over an area of 40,000 ha. known as Mianâb (Paradise). The property has an ensemble of remarkable sites including the Salâsel Castel, the operation centre of the entire hydraulic system, the tower where the water level is measured, damns, bridges, basins and mills. It bears witness to the know-how of the Elamites and Mesopotamians as well as more recent Nabatean expertise and Roman building influence.

The Shushtar Historical Hydraulic System demonstrates outstanding universal value as in its present form, it dates from the 3rd century CE, probably on older bases from the 5th century BCE. It is complete, with numerous functions, and large-scale, making it exceptional. The Shushtar system is a homogeneous hydraulic system, designed globally and completed in the 3rd century CE. It is as rich in its diversity of civil engineering structures and its constructions as in the diversity of its uses (urban water supply, mills, irrigation, river transport, and defensive system). The Shushtar Historical Hydraulic System testifies to the heritage and the synthesis of earlier Elamite and Mesopotamian knowhow; it was probably influenced by the Petra dam and tunnel and by Roman civil engineering. The Shushtar hydraulic system, in its ensemble and most particularly the Shâdorvân Grand Weir (bridge-dam), has been considered a Wonder of the World not only by the Persians but also by the Arab-Muslims at the peak of their civilisation. The Gargar canal is a veritable artificial watercourse which made possible the construction of a new town and the irrigation of a vast plain, at the time semi-desert. The Shushtar Historical Hydraulic System sits in an urban and rural landscape specific to the expression of its value.

Criterion (i): The Shushtar Hydraulic System is testimony to a remarkably accomplished and early overall vision of the possibilities afforded by diversion canals and large weir-dams for land development. It was designed and completed in the 3rd century CE for sustainable operation and is still in use today. It is a unique and exceptional ensemble in terms of its technical diversity and its completeness that testifies to human creative genius.

Criterion (ii): The Shushtar Historical Hydraulic System is a synthesis of diverse techniques brought together to form a remarkably complete and large-scale ensemble. It has benefited from the ancient expertise of the Elamites and Mesopotamians in canal irrigation, and then that of the Nabateans; Roman technicians also influenced its construction. Its many visitors marvelled at it and were in turn inspired. It testifies to the exchange of considerable influences in hydraulic engineering and its application throughout antiquity and the Islamic period under the various Iranian dynasties.

Criterion (v): Shushtar is a unique and exceptionally complete example of hydraulic techniques developed during ancient times to aid the occupation of semi-desert lands. By diverting a river flowing down the mountains, using large-scale civil engineering structures and the creation of canals, it made possible multiple uses for the water across a vast territory: urban water supply, agricultural irrigation, fish farming, mills, transport, defence system, etc. It testifies to a technical culture dating back eighteen centuries serving the sustainable development of a human society, in harmony with its natural and urban environment.

Shushtar is in Khuzestan province and is one of the oldest cities in Iran. It has many historical and architectural wonders. An overnight train from Tehran departs every second day. 1 Shushtar railway station is located west of the city centre. Shushtar can be combined with Shush and Chogha Zanbil as a daytrip by taxi from Ahvaz. See Historical Hydraulic System. A hydralic system built on the river Kârun as far back as the 5th century B.C. under the reign of King Darius. It comprises a UNESCO World Heritage site; Band-e Kaisar. Ancient arc bridge, built by the Romans in the 3rd century AD; Band Mizan. The Mizan dam, which splits the Kârun river into two channels, Gargar and Shatit; and Salasel Castle. Part of the UNESCO World Heritage site, Salasel castle is now almost completely in ruins. However, the tunnels and cellars is still open to explore. Do swimming, boating and kayaking [read more].

Ahvaz (Romanized as Ahwaz) is a city in Khuzestan Province in southwestern Iran. Ahvaz sits on the banks of the Karoun River, which splits the city into two large districts. The western half is mostly housing with some government departments. The eastern half is both residential and industrial. The main train station is on the western side and the airport is on the eastern side. It is extremely hot in the summer. Expect 45°C in July and August. See: Karoon county or known as “Kut Kut” is where most of the Ahvaz tourist attractions are gathered. Kut Kut is the home to water buffaloes. Its Arab residents have a culture that is unique in the country. They live a simple village-like life just 10 minutes drive away from city center. They answer every “hello” with sincere “welcome”. They bring their cattle to the water during the day, making a breath-taking view. Also their simple yet strong breakfast is offered to every traveler who knocks on the door [read more].

Khorramabad (also written as Khorram Abad) is the capital city of the Lorestan Province of Western Iran. See Paleolithic cave-dwelling sites Falak-ol-Aflak Castle (“Dež-e Shāpūr-Khwāst”). A tall citadel located in the city center. Translated as the Heaven of Heavens, the castle dates back to the Sassanid era. Nowadays, the castle houses a popular museum [read more].