The Rock Shelters of Bhimbetka are in the foothills of the Vindhyan Mountains on the southern edge of the central Indian plateau. Within massive sandstone outcrops, above comparatively dense forest, are five clusters of natural rock shelters, displaying paintings that appear to date from the Mesolithic Period right through to the historical period. The cultural traditions of the inhabitants of the twenty-one villages adjacent to the site bear a strong resemblance to those represented in the rock paintings. 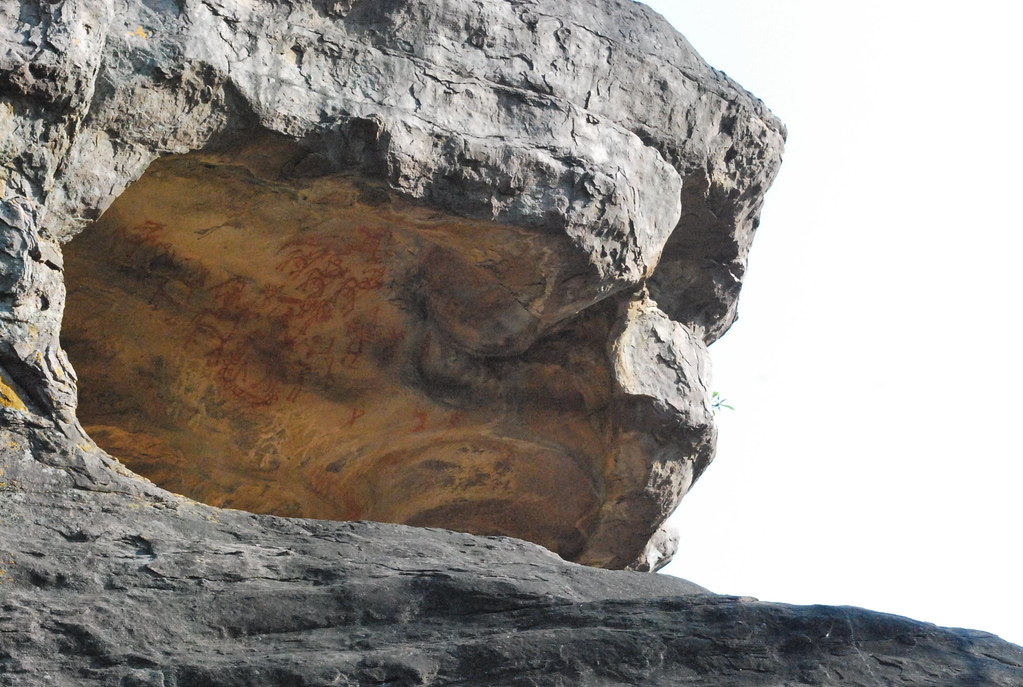 Bhopal (Hindi: Bhopaal) is the capital of Madhya Pradesh, India. Bhopal is a good mix of the old and the new with old portions of Bhopal reminiscent of the Mughal influence and the new ones showcasing the planned development of a modern Indian city. Bhopal is the seat of the Madhya Pradesh government and is a beautiful mid-sized city in the heart of India. It is said that Bhopal was first called “Bhoj-pal” after Raja Bhoj, who is credited with founding the city. It was an important part of the “Bhoj” kingdom with Ujjayini (modern-day Ujjain, about 190 km from Bhopal) being the seat of the kingdom. Bhopal is also known for the world’s worst industrial disaster, the poisonous mithyle iso-cyanide gas leak from the Union Carbide plant in December 1984. The accident caused over 3,700 officially recognised deaths, half a million injuries, many birth defects, and the survivors continue to suffer to this day [read more].

Vidisha (formerly known as Bhelsa and known as Besnagar in ancient times) is a city in the state of Madhya Pradesh, India. It is located 62.5 km northeast of the state capital, Bhopal. The name “Vidisha” is derived from the nearby river “Bais”, mentioned in the Puranas. The district was created as “Bhilsa District” in 1904 by joining the tehsils of Vidisha (also known as Bhilsa) and Basoda, but not Basoda State, which were then part of Gwalior state. After India’s independence in 1947, the former princely state of Gwalior became part of Madhya Bharat state, which was formed in 1948. Vidishā was the administrative headquarters of Bhelsa, or Bhilsa, during the Medieval period. It was renamed Vidisha in 1956. The town is situated east of the Betwa River, in the fork of the Betwa and Bes rivers, 9 km from Sanchi. The town of Besnagar, 3 km from present-day Vidisha on the west side of the river, became an important trade centre in the 6th and 5th centuries BCE, under the Shungas, Nagas, Satavahanas, and Guptas, and was mentioned in the Pali scriptures [read more].

Indore, the commercial capital of Madhya Pradesh, is situated on the Malwa Plateau. While growing at a fast pace, it still manages to combine traditional and modern lifestyles. Indoris are well known for their warm and friendly attitude. The city is officially the cleanest in India, a distinction it has earned through the dedicated efforts of its local government. Indore is situated at an altitude of 553 m above sea level, on the banks of two small rivulets – the Saraswati and the Khan. They unite at the centre of the city where a small 18th-century temple of Sangamnath or Indreshwar exists. The name Indore is due to this deity. It is the largest city in Madhya Pradesh, with a population of over a million, and a commercial hub. Indore city presents a happy blend of historical past and promises of rapid modernization. Indore has witnessed the reign of one of the greatest women in Indian history, Rani Ahilyabai Holkar [read more].