The Red Fort Complex was built as the palace fort of Shahjahanabad – the new capital of the fifth Mughal Emperor of India, Shah Jahan. Named for its massive enclosing walls of red sandstone, it is adjacent to an older fort, the Salimgarh, built by Islam Shah Suri in 1546, with which it forms the Red Fort Complex. The private apartments consist of a row of pavilions connected by a continuous water channel, known as the Nahr-i-Behisht (Stream of Paradise). The Red Fort is considered to represent the zenith of Mughal creativity which, under the Shah Jahan, was brought to a new level of refinement. The planning of the palace is based on Islamic prototypes, but each pavilion reveals architectural elements typical of Mughal building, reflecting a fusion of Persian, Timurid and Hindu traditions The Red Fort’s innovative planning and architectural style, including the garden design, strongly influenced later buildings and gardens in Rajasthan, Delhi, Agra and further afield. 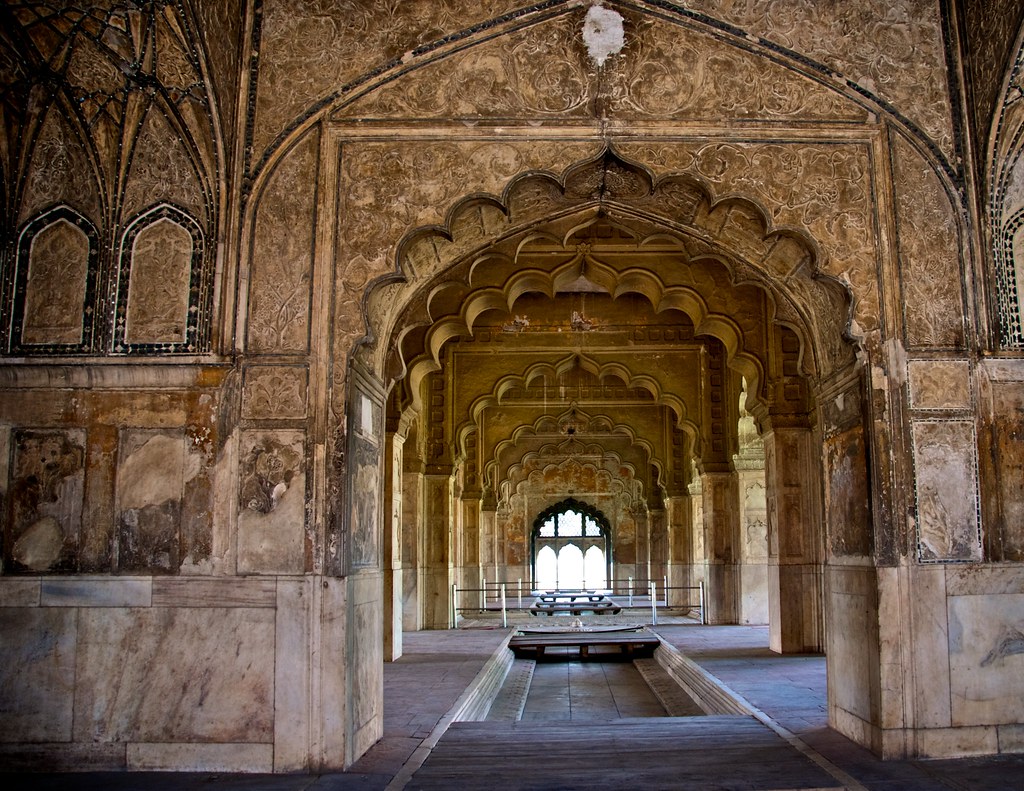 The planning and design of the Red Fort represents a culmination of architectural development initiated in 1526 AD by the first Mughal Emperor and brought to a splendid refinement by Shah Jahan with a fusion of traditions: Islamic, Persian, Timurid and Hindu. The innovative planning arrangements and architectural style of building components as well as garden design developed in the Red Fort strongly influenced later buildings and gardens in Rajasthan, Delhi, Agra and further afield. The Red Fort has been the setting for events which have had a critical impact on its geo-cultural region.

Criterion (ii): The final flourishing of Mughal architecture built upon local traditions but enlivened them with imported ideas, techniques, craftsmanship and designs to provide a fusion of Islamic, Persian, Timurid and Hindu traditions. The Red Fort demonstrates the outstanding results this achieved in planning and architecture.

Criterion (vi): The Red Fort has been a symbol of power since the reign of Shah Jahan, has witnessed the change in Indian history to British rule, and was the place where Indian independence was first celebrated, and is still celebrated today. The Red Fort Complex has thus been the setting of events critical to the shaping of regional identity, and which have had a wide impact on the geo-cultural region.

Delhi is India’s capital and seat of government. It forms the National Capital Territory of Delhi, rather than being part of a state. Delhi is one of India’s largest cities, and the core of one of the largest metropolitan areas in the world, with over 21 million inhabitants. Within India it is a major center of arts, commerce, education, tourism, and transit. As the capital of several empires over the last 2000 years, Delhi also contains a striking array of well-preserved historic sites for the tourist to visit. Travellers with little experience of visiting developing megacities will find Delhi to be chaotic, crowded and for much of the year, polluted. During the late spring and early summer months, the city is scorchingly hot. Dig a little deeper however and you will get a glimpse of order beneath the chaos as well as India’s traditional and modern cultural richness flourishing side by side [read more].

Ghaziabad is in Uttar Pradesh in India. As its boundary is adjacent to Delhi, it acts as the main entrance of Uttar Pradesh and that is why it is also called the Gateway of Uttar Pradesh. The place was founded in 1740 by the vizir, Ghazi-ud-din, who called it Ghaziuddinnagar after himself and built a spacious sarai consisting of 120 rooms of masonry with pointed arches. Only the gate, a few portions of the boundary wall and a massive pillar about 14 feet in height remains now, the precincts now being inhabited. His masoleum still stands in the city but is in a bad state of preservation. The Jat raja, Surajmal, was killed near the city by the Rohillas in 1763. An encounter between the freedom fighters and a small British force took place here in May 1857, in which the former were defeated while trying to hold the Hindon. After the opening of a railway line, the name of the place was shortened to Ghaziabad [read more].

Agra is the city of the Taj Mahal, in the north Indian state of Uttar Pradesh, some 200 km from Delhi. Agra has three UNESCO World Heritage sites, the Taj Mahal and the Agra Fort in the city and Fatehpur Sikri 40 km away. There are also many other buildings and tombs from Agra’s days of glory as the capital of the Mughal Empire. Besides these three sites, the city has little else to recommend it. Pollution, especially smog and litter, is rampant and visitors are pestered by swarms of touts and hawkers at every monument, besides the inner Taj Mahal which, once you are in, is free of scams and touts. The sites are some of the wonders of the world and no trip to India is complete without at least one visit to the Taj. For the vast majority of visitors, a single day in Agra is more than enough [read more].