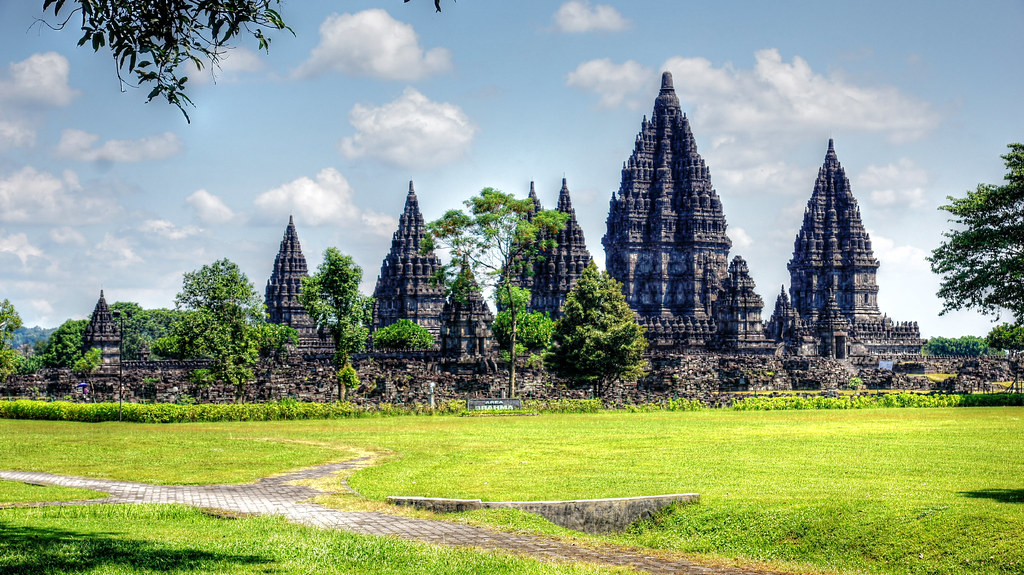 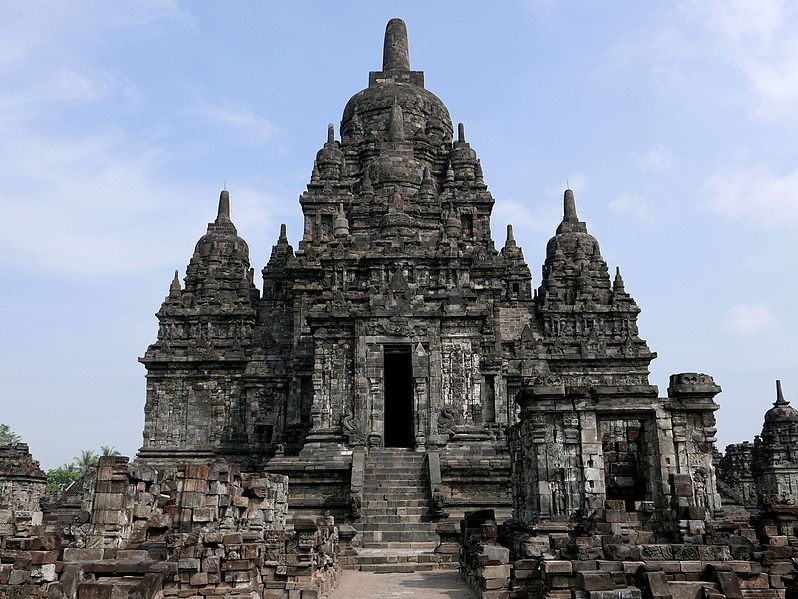 Prambanan Temple Compounds consist of Prambanan Temple (also called Loro Jonggrang), Sewu Temple, Bubrah Temple and Lumbung Temple. Prambanan Temple itself is a complex consisting of 240 temples. All the mentioned temples form the Prambanan Archaeological Park and were built during the heyday of Sailendra’s powerful dynasty in Java in the 8th century AD. These compounds are located on the border between the two provinces of Yogyakarta and Central Java on Java Island.

While Loro Jonggrang, dating from the 9th century, is a brilliant example of Hindu religious bas-reliefs, Sewu, with its four pairs of Dwarapala giant statues, is Indonesia’s largest Buddhist complex including the temples of Lumbung, Bubrah and Asu (Gana temple). The Hindu temples are decorated with reliefs illustrating the Indonesian version of the Ramayana epic which are masterpieces of stone carvings. These are surrounded by hundreds of shrines that have been arranged in three parts showing high levels of stone building technology and architecture from the 8th century AD in Java. With over 500 temples, Prambanan Temple Compounds represents not only an architectural and cultural treasure, but also a standing proof of past religious peaceful cohabitation.

Criterion (i): Prambanan Temple Compounds presents the grandiose culture of Siva art as a masterpiece of the classical period in Indonesia, and the region.

Criterion (iv): The property is an outstanding religious complex, characteristic of Siva expression of the 10th century.

Solo the short name for Surakarta, is a major city in Central Java, Indonesia. Together with Yogyakarta, these two great cultural centres are heirs of the Mataram kingdom that was split in 1755. Both centres are good bases for trips to nearby UNESCO World Heritage sites like the temple complexes of Borobudur and Prambanan. Solo lies some 100 km (62 mi) south of Semarang and some 60 km (37 mi) east of Yogyakarta. As the ‘twin’ sister of Yogyakarta, this city looks much like the latter. But because Solo is not a provincial capital, this city has preserved much of its Javanese character. This also means that Solo is less touristy than Yogyakarta. The town is a centre of art and education and offers some good shopping. It is said to be the least westernised city in Central Java. The formal name for the city is Surakarta. Less formal but widely used is Solo [read more].

Semarang is the capital of Central Java province in Indonesia. It is a bustling, growing mid-sized city with a population of over 1.5 million. It is more an administrative and business town than a tourist destination. It nevertheless has its own charm, with contrasting modern mid-rises, a significant set of Dutch colonial architecture, Chinatown, and “kampung” all jutting against each other. The city’s name is said to derive from the Javanese words “asem” and “arang”, which could be translated as “scarce tamarind.” Semarang lies on the province’s northern coast. Semarang’s topography is marked by a narrow coastal plain, rising sharply inland. The city sprawls up from the coast, and the higher areas see some of the highest rate of residential development, due to the slightly cooler climate. The sea is slowly reclaiming the coastal lowlands during the monthly rob or high tides, causing flooding up to more than a kilometer from the coast [read more].

Yogyakarta— despite the official spelling, the name is usually pronounced and not uncommonly written Jogjakarta or just Jogja (JOG-jah) — is a major tourist destination in Indonesia. It is the capital of Yogyakarta Special Region to the south of Central Java province. Yogyakarta is a bustling town of some 500,000 people and the most popular tourist destination on Java, largely thanks to its proximity to the temples of Borobudur and Prambanan. The city is a centre of art and education, offers some good shopping and has a wide range of tourist facilities. The city (kota) of Yogyakarta is one of five districts in the semi-autonomous province of Daerah Istimewa Yogyakarta (DIY), the “Yogyakarta Special Region”. The other districts are the regencies of: Sleman on the slopes of fiery Mount Merapi to the north; Bantul all the way to the sea to the south; the hills of Gunung Kidul to the east; and the lowlands of Kulon Progo to the West [read more].