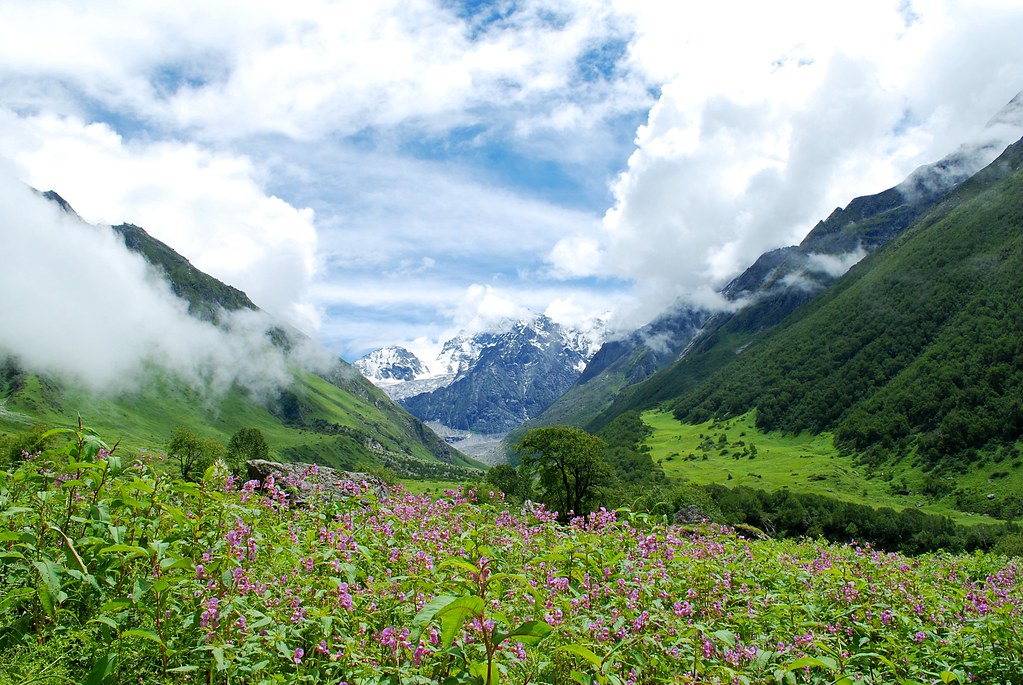 Nestled high in West Himalaya, India’s Valley of Flowers National Park is renowned for its meadows of endemic alpine flowers and outstanding natural beauty. This richly diverse area is also home to rare and endangered animals, including the Asiatic black bear, snow leopard, brown bear and blue sheep. The gentle landscape of the Valley of Flowers National Park complements the rugged mountain wilderness of Nanda Devi National Park. Together they encompass a unique transition zone between the mountain ranges of the Zanskar and Great Himalaya, praised by mountaineers and botanists for over a century and in Hindu mythology for much longer.

The Nanda Devi and Valley of Flowers National Parks are exceptionally beautiful high-altitude West Himalayan landscapes with outstanding biodiversity. One of the most spectacular wilderness areas in the Himalayas, Nanda Devi National Park is dominated by the 7,817 m peak of Nanda Devi, India’s second highest mountain which is approached through the Rishi Ganga gorge, one of the deepest in the world. The Valley of Flowers National Park, with its gentler landscape, breath-taking beautiful meadows of alpine flowers and ease of access, complements the rugged, inaccessible, high mountain wilderness of Nanda Devi. Apart from some community-based ecotourism to small portions of these parks, there has been no anthropogenic pressure in this area since 1983. This property therefore acts as a control site for the maintenance of natural processes, and is of high significance for long-term ecological monitoring in the Himalayas.

Both parks contain high diversity and density of flora and fauna of the west Himalayan biogeographic zone, with significant populations of globally threatened species including the snow leopard, Himalayan musk deer and numerous plant species. Covering 71,210 ha, these two parks are surrounded by a large buffer zone of 514,857 ha which encompasses a wide range of elevation and habitats. This entire area, located within the Western Himalayas Endemic Bird Area (EBA), supports significant populations of mountain ungulates and galliformes that are prey to carnivores such as the snow leopard.

Criterion (vii): The Nanda Devi National Park is renowned for its remote mountain wilderness, dominated by India’s second highest mountain at 7,817 m and protected on all sides by spectacular topographical features including glaciers, moraines, and alpine meadows. This spectacular landscape is complemented by the Valley of Flowers, an outstandingly beautiful high-altitude Himalayan valley. Its ‘gentle’ landscape, breath-taking beautiful meadows of alpine flowers and ease of access has been acknowledged by renowned explorers, mountaineers and botanists in literature for over a century and in Hindu mythology for much longer.

Criterion (x): The Nanda Devi National Park, with its wide range of high altitude habitats, holds significant populations of flora and fauna including a number of threatened mammals, notably snow leopard and Himalayan musk deer, as well as a large population of bharal, or blue sheep.  Abundance estimates for wild ungulates, galliformes and carnivores within the Nanda Devi National Park are higher than those in similar protected areas in the western Himalayas. The Valley of Flowers is internationally important on account of its diverse alpine flora, representative of the West Himalaya biogeographic zone. The rich diversity of species reflects the valley’s location within a transition zone between the Zanskar and Great Himalaya ranges to the north and south, respectively, and between the Eastern and Western Himalaya flora. A number of plant species are globally threatened, several have not been recorded from elsewhere in Uttarakhand and two have not been recorded in Nanda Devi National Park. The diversity of threatened species of medicinal plants is higher than has been recorded in other Indian Himalayan protected areas. The entire Nanda Devi Biosphere Reserve lies within the Western Himalayas Endemic Bird Area (EBA). Seven restricted-range bird species are endemic to this part of the EBA.

Gopeshwar is a township in the Garhwal hills and a municipal board within Chamoli district. It is the administrative headquarters of the Chamoli District of Uttarakhand in India. Located 1,550 m (5,090 ft) above sea level, it is famous for its weather (pleasant most of the year, but very cold in December and January) and its temples. It is the largest town in Chamoli district. Famous places in Gopeshwar include Pt. Dindayal Park, Kunds, the Gopinath Temple, and the Telephone Tower House. The only T.B. Hospital in Chamoli District is located in Gopeshwar. A sports stadium is located on a portion of the property making up the police grounds. Major colonies are Pwd Colony, Jal Nigam, Wireless Colony, Police Colony, Kund Colony, Post Office, Basant bihar, Saraswati Bihar, Subhash Nagar, Haldapani, Negwar, Mandir Colony, Teacher Colony, Hospital Colony and Polytechnic Colony. Gopeshwar is well connected by road and is accessible throughout the year [read more].

Pithoragarh is a city in Uttarakhand. It is close to the China, Nepal and Tibet border. Pithoragarh can be accessed by bus and taxi. The buses are available from New Delhi at ISBT Anand Vihar which are of category general to luxury: New Delhi to Haldwani to Pithoragarh; New Delhi to Tanakpur to Pithoragarh; New Delhi-Bazpur-Kaladungi-Nainital-Almora-Pithoragarh. If you come by the first option then you have to get down at Haldwani and from there you will get a shared taxi to Pithoragarh, in this option the buses available from Delhi are of both categories (i.e., A/C, non A/C), but if you come by the second option then you will get a direct bus from there, but the condition of the roads is not good, so it is advised to come by the first option. The third option is the best if you have your own vehicle. The travel time is 10½ hrs from Delhi, if you are experienced in hill driving; if not, then 12 hours [read more].

Dehradun is the provisional capital of Uttarakhand state. It is nestled between the Himalayan foothills to the north and the Shivaliks to the south. The town offers breathtaking scenery. Dehradun has experienced tremendous growth, and has a population of around 550,000. It is also famous for the Doon School, which is often referred to as the Eton of India. Dehradun is a base for trekking and adventure tourism, and many people just stay overnight in the city before heading into the Garhwal Hills. Picnic – Pack a hamper of food and drinks and picnic at Sahastradhara, on the banks of the Baldi River. The mineral waters here are pure and clean. It is a 30-minute drive from the city of Dehradun. You can also rent a cycle from Hotel Madhuban. It takes a little over an hour to bike down. After a hard day’s sightseeing, drive down to the village of Dakpathar 45 km away [read more].