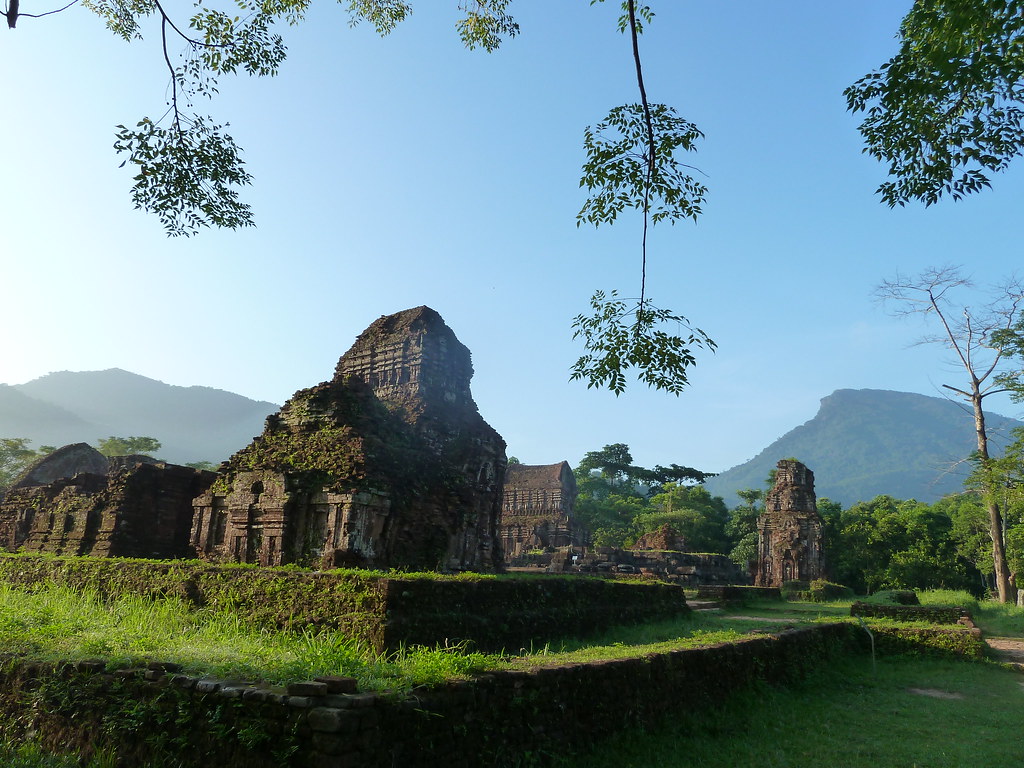 Between the 4th and 13th centuries a unique culture which owed its spiritual origins to Indian Hinduism developed on the coast of contemporary Viet Nam. This is graphically illustrated by the remains of a series of impressive tower-temples located in a dramatic site that was the religious and political capital of the Champa Kingdom for most of its existence.

Building B5, My Son Sanctuary (Shansov/Wikipedia, CC BY 3.0).

During the 4th to 13th centuries there was a unique culture on the coast of contemporary Vietnam, owing its spiritual origins to the Hinduism of India. This is graphically illustrated by the remains of a series of impressive tower temples in a dramatic site that was the religious and political capital of the Champa Kingdom for most of its existence.

My Son Sanctuary dates from the 4th to the 13th centuries CE. The property is located in the mountainous border Duy Xuyen District of Quang Nam Province, in central Viet Nam. It is situated within an elevated geological basin surrounded by a ring of mountains, which provides the watershed for the sacred Thu Bon river. The source of the Thu Bon river is here and it flows past the monuments, out of the basin, and through the historic heartland of the Champa Kingdom, draining into the South China Sea at its mouth near the ancient port city of Hoi An. The location gives the sites its strategic significance as it is also easily defensible.

The tower temples were constructed over ten centuries of continuous development in what was the heart of the ancestral homeland of the ruling Dua Clan which unified the Cham clans and established the kingdom of Champapura (Sanskrit for City of the Cham people) in 192 CE. During the 4th to 13th centuries CE this unique culture, on the coast of contemporary Viet Nam, owed its spiritual origins to the Hinduism of the Indian sub-continent. Under this influence many temples were built to the Hindu divinities such as Krishna and Vishnu, but above all Shiva. Although Mahayan Buddhist penetrated the Cham culture, probably from the 4thcentury CE, and became strongly established in the north of the kingdom, Shivite Hinduism remained the established state religion.

The monuments of the My Son sanctuary are the most important constructions of the My Son civilization. The tower temples have a variety of architectural designs symbolizing the greatness and purity of Mount Meru, the mythical sacred mountain home of Hindu gods at the center of the universe, now symbolically reproduced on Earth in the mountainous homeland of the Cham people. They are constructed in fired brick with stone pillars and decorated with sandstone bas-reliefs depicting scenes from Hindu mythology. Their technological sophistication is evidence of Cham engineering skills while the elaborate iconography and symbolism of the tower-temples give insight into the content and evolution of Cham religious and political thought.

The My Son Sanctuary is a remarkable architectural ensemble that developed over a period of ten centuries. It presents a vivid picture of spiritual and political life in an important phase of the history of South-East Asia.

The monuments are unique and without equal in Southeast Asia.

Criterion (ii): The My Son Sanctuary is an exceptional example of cultural interchange, with an indigenous society adapting to external cultural influences, notably the Hindu art and architecture of the Indian sub-continent.

Criterion (iii): The Champa Kingdom was an important phenomenon in the political and cultural history of South – East Asia, vividly illustrated by the ruins of My Son.

Da Nang is Vietnam’s fifth largest city. It’s in Central Vietnam on the South China Sea coast, midway between Hanoi and Ho Chi Minh City. The city has neither the ambiance of Hanoi nor the hustle-bustle of Ho Chi Minh City, but has its share of sights and is close to the charms of Hoi An and the imperial capital of Hue, making it a popular vacation spot for those looking to explore the attractions of central Vietnam or soak up some sun while hanging out on the city’s beaches. The regions surrounding Da Nang (My Son, Quang Nam) were founded by the Cham Hindus perhaps 3,000 years ago, serving as the capital city and centre of the Hindu Champa Dynasty. Vietnamese invasions into the region in the 17th century significantly halted Cham development. Given that Da Nang was the first point of colonial invasion, many vestiges of French architecture are present in the historic buildings [read more].

Hue is in the central region of Vietnam and is the former imperial capital. Hue is intimately connected to the imperial Nguyễn Dynasty, based in Hue, which ruled from 1802 to 1945, when the Emperor Bao Dai abdicated in favour of Ho Chi Minh’s revolutionary government. The city went through tough times during what is known locally as the American War, when it was conquered by the Viet Cong and held for 24 days. During that time, they executed around 1,000 people suspected of sympathizing with the South. After a ferocious assault, US and South Vietnamese forces retook the city. Hue is easy to get a grip on. The main landmark is the Perfume River (Hương Giang), with the old city and the citadel on the north side and the newer city, including most hotels and restaurants, on the south side. Much of the riverside has wisely been done up as a pleasant promenade and park dotted with bizarre sculptures [read more].

Quang Ngai is a city in the Central Coast region of Vietnam. Known for the My Lai incident during the Vietnam War. A sleepy town that is up and coming but well off the beaten tracks. This place doesn’t receive many visitors who often bypass the town for Da Nang north or Nha Trang to the south. Recent government investments in oil refineries has earned Quảng Ngãi recognition. The town’s numerous cultural and historical sights are getting more attention. Quảng Ngãi is a town that used to be neglected, forgotten, and bypassed by government, tourists, even the residents wanted to get out of this uneventful town. Now with all the oil money coming in, Quẚng Ngãi has been recapitalized, revitalized, and reborn. Now, everybody seems to be rushing back into town. New cafes, resorts, and upscale restaurants are popping up all over town. Business folks from Hanoi and HCMC are coming to this town to snatch up properties, open cafes, bars and dinning places [read more].