The first Buddhist temple in China was built here in Sichuan Province in the 1st century A.D. in the beautiful surroundings of the summit Mount Emei. The addition of other temples turned the site into one of Buddhism’s holiest sites. Over the centuries, the cultural treasures grew in number. The most remarkable is the Giant Buddha of Leshan, carved out of a hillside in the 8th century and looking down on the confluence of three rivers. At 71 m high, it is the largest Buddha in the world. Mount Emei is also notable for its exceptionally diverse vegetation, ranging from subtropical to subalpine pine forests. Some of the trees there are more than 1,000 years old. 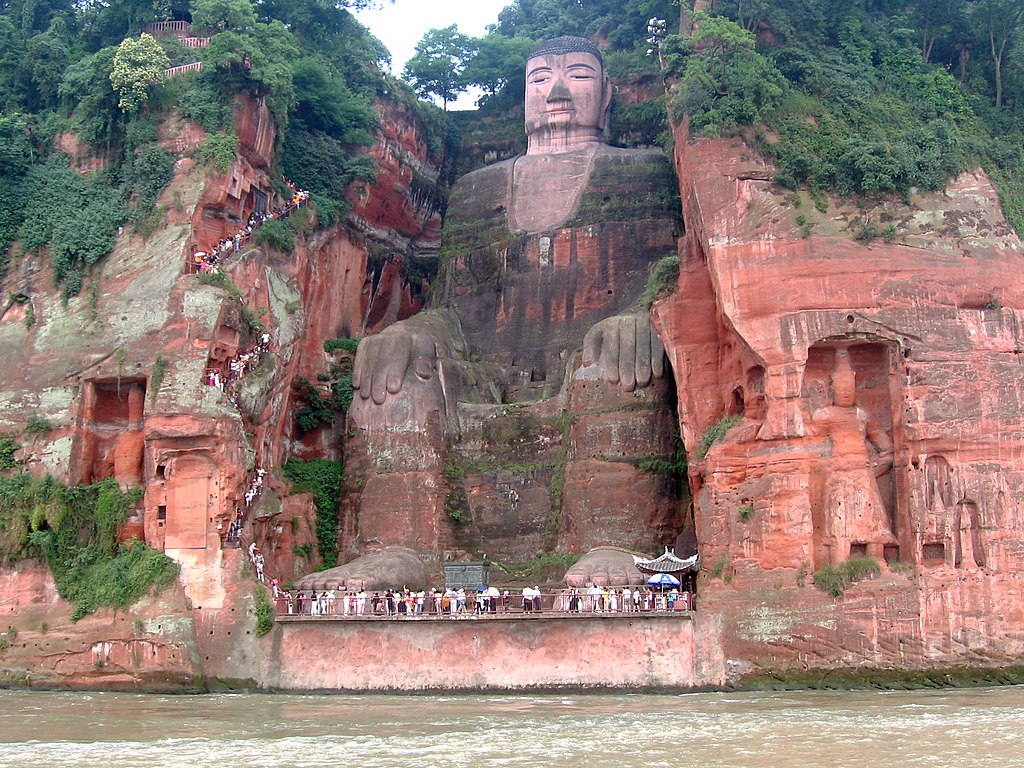 Mount Emei (Emeishan) is an area of exceptional cultural significance as it is the place where Buddhism first became established on Chinese territory and from where it spread widely through the East. The first Buddhist temple in China was built on the summit of Mount Emei in the 1st century CE. It became the Guangxiang Temple, receiving its present royal name of Huazang in 1614. The addition of more than 30 other temples including the Wannian Temple founded in the 4th century containing the 7.85m high Puxian bronze Buddha of the 10th century, and garden temples including the Qingyin Pavilion complex of pavilions, towers and platforms dating from the early 6th century; the early 17th century Baoguo Temple and the Ligou Garden (Fuhu Temple) turned the mountain into one of Buddhism’s holiest sites. The most remarkable manifestation of this is the 71 meter tall Giant Buddha of Leshan. Carved in the 8th century CE on the hillside of Xijuo Peak overlooking the confluence of three rivers, it is the largest Buddhist sculpture in the world. A contemporary account of the creation of the Giant Buddha is preserved in the form of an inscribed tablet. Associated monuments include the 9th century Lingbao Pagoda and the Dafo (Giant Buddha) Temple dating from the early Qing Dynasty. The Wuyu Temple contains two important statues: the 9th century Dashi bronze Buddha and the 11th century Amithabha statue group, cast in iron and gilded. Over five hundred Han Dynasty tombs of the 1st to 4th centuries, notable for their fine carvings and calligraphic inscriptions are located on Mahao Crag.

Mount Emei is an area of striking scenic beauty. It is also of great spiritual and cultural importance because of its role in the introduction of Buddhism into China. The conscious siting of so many of the cultural monuments, particularly of traditional architecture, within the natural environment makes it a cultural landscape of very high order.

Mount Emei is also notable for its exceptionally rich vegetation, ranging from subtropical evergreen forests to subalpine pine forests. Covering an area of 15,400 ha in two discrete areas – the Mount Emei and the Leshan Giant Buddha Scenic Areas – the property is an area of natural beauty into which the human element has been integrated with skill and subtlety.

Criterion (iv): On Mount Emei, there are over 30 temples, ten of them large and very old; they are in local traditional style and most are built on hillsides, taking advantage of the terrain. In the selection of the site, design, and construction they are masterpieces of great originality and ingenuity. The advanced architectural and building techniques are the quintessence of Chinese temple architecture.

Associated with these temples are found some of the most important cultural treasures of China, including the remarkable Leshan Giant Buddha carved in the 8th century CE out of the hillside of Xijuo Peak.  Facing the confluence of the Minjiang, Dadu and Qingyi rivers, it is the tallest Buddha sculpture in the world with a height of 71 meters.

Criterion (vi): On Mount Emei, the importance of the link between the tangible and intangible, the natural and the cultural, is uppermost. Mount Emei is a place of historical significance as one of the four holy lands of Chinese Buddhism. Buddhism was introduced into China in the 1st century CE via the Silk Road from India to Mount Emei, and it was on Mount Emei that the first Buddhist temple in China was built.

The rich Buddhist cultural heritage of Mount Emei has a documented history of over 2,000 years, consisting of archaeological sites, important architecture, tombs, ritual spaces, and collections of cultural artefacts, including sculpture, stone inscriptions, calligraphy, painting, and music, among other traditional arts.

Criterion (x): Mount Emei is a site of special significance to conservation and to science for its high floral diversity. The biodiversity of the site is exceptionally rich: some 3,200 plant species in 242 families have been recorded, of which 31 are under national protection and more than 100 species are endemic. This is due to its transitional location at the edge of the Sichuan basin and the eastern Himalayan highlands. Within its elevation range of 2,600 m are found a great variety of vegetation zones including subtropical evergreen broad-leaved forest, mixed evergreen and deciduous broad-leaved forest, mixed broad-leaved and conifer forests, and subalpine conifer forest. This exceptional flora is also rich in animal species with some 2,300 species recorded, including several threatened at a global scale.

Leshan is a city near in Sichuan Province. Sitting on the confluence of the Dadu, Mín and Qingyi rivers it is most famous for its huge riverside cliff-carving of Buddha and nearby Mount Emei; which together are a World Heritage Site. Leshan city has a history of over 3000 years. See Central Leshan. Leshan Ebony Museum. This is well worth a visit if you are not familiar with ebony and the amazing carvings that can be made from it. Some of the displays are a bit tacky but there are some spectacular carvings of famous Chinese literary and legendary scenes. Leshan Giant Buddha. One of the main attraction to see is the Leshan Giant Buddha. The Giant Buddha is a 71 m (230 feet) high sculpture carved into one of the large cliffs by the river. In addition to the Giant Buddha, there are also numerous smaller carvings of various Buddhas on the Grand Buddha Cliff Road [read more].

Zigong is a city in East Sichuan. See Zigong Dinosaur Museum. Located on top of the Dashanpu Formation, China’s most famous dinosaur fossil site, where hundreds of dinosaur fossils have been found since the 1970s. The museum was the first museum in China to be devoted exclusively to dinosaurs. The museum is quite large, covering a surface area of 25,000 m² and display area of 3600 m². Besides the usual displays, one can also view an excavation pit where fossils have been unearthed. Zigong Salt History Museum is housed inside what used to be a guild hall for salt merchants.The exquisite decor is representative of the wood and rock carving styles of the Qing dynasty. The Shenhai Well is a one-kilometre-deep salt well that was constructed in 1835. It is the only traditional salt well in China that is still being used to this day. China Lantern Museum [read more].

Chengdu is the provincial capital and largest city of Sichuan Province in southwest China. Chengdu is on the edge of the fertile plains of the Red Basin in China’s Sichuan Province. Due to its agricultural wealth, Chengdu is sometimes called the “Heavenly Land of Plenty”. The Funan River bisects the city, although boat traffic, common until the 1960s, has all but vanished. The Chengdu administrative area is home to more than 14 million people, with about 10 million of them in the Chengdu urban area. Chengdu has the reputation as a very “laid-back” city that emphasizes culture and relaxation. As a result of this and much green space, it is ranked one of the most livable mega-cities in China. It is credited with a good nightlife scene, and contains many new western style buildings in the large city center. Summer weather is hot and humid, as the city is surrounded by small mountains to the east and sits in the Red Basin [read more].