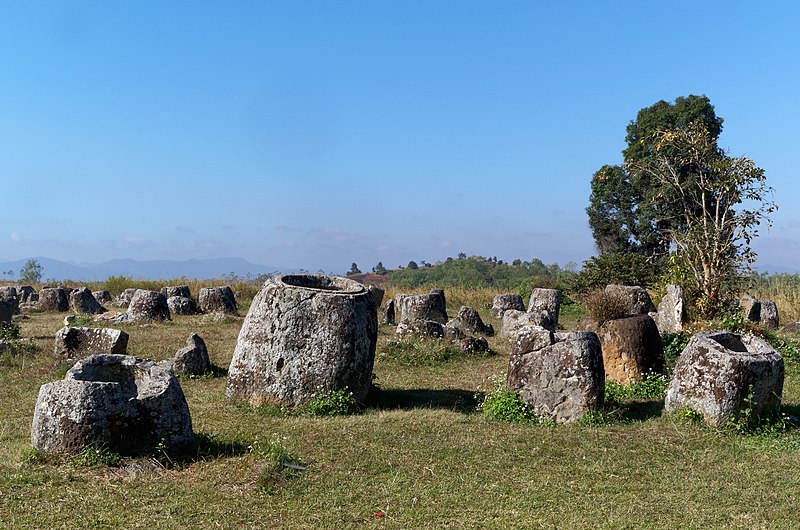 The Plain of Jars, located on a plateau in central Laos, gets its name from more than 2,100 tubular-shaped megalithic stone jars used for funerary practices in the Iron Age. This serial property of 15 components contains large carved stone jars, stone discs, secondary burials, tombstones, quarries and funerary objects dating from 500 BCE to 500 CE. The jars and associated elements are the most prominent evidence of the Iron Age civilization that made and used them until it disappeared, around 500 CE.

More than 2100 tubular-shaped megalithic stone jars used for funerary practices in the Iron Age give the Plain of Jars its name. This serial property of 15 components contains 1325 of these large carved stone jars, stone discs (possibly lids for the jars), secondary burials, grave markers, quarries, manufacturing sites, grave goods and other features. Located on hill slopes and spurs surrounding the central plateau, the jars are large, well-crafted, and required technological skill to produce and move from the quarry locations to the funerary sites. The jars and associated elements are the most prominent evidence of the Iron Age civilisation that made and used them, about which little is known. The sites are dated from between 500 BCE and 500 CE (and possibly up to as late as 800 CE). The jars and associated archaeological features provide evidence of these ancient cultural practices, including associated social hierarchies. The Plain of Jars is located at an historical crossroads between two major cultural systems of Iron Age southeast Asia – the Mun-Mekong system and the Red River/Gulf of Tonkin system. Because the area is one that facilitated movement through the region, enabling trade and cultural exchange, the distribution of the jars sites is thought to be associated with overland routes.

Criterion (iii): The Plain of Jars exhibits an exceptional testimony to the civilisation that made and used the jars for their funerary practices over a period from approximately 500 BCE to sometime after 500 CE. The size of the megalithic jars, and their large number and wide distribution within the Province of Xiengkhuang is remarkable, and the serial property of 15 components contains a range of sites that can attest to the quarrying, manufacturing, transportation and use of the funerary jars over this lengthy period of southeast Asian cultural histories.

Phonsavan (Phonsavanh) is the capital of Xieng Khouang Province in Central Laos. It is known primarily as the gateway to the Plain of Jars. Understand Phonsavan is the provincial capital of Xieng Khouang Province. It was built in the late 1970s and replaced the old Xieng Khouang which had been destroyed during the Second Indochina War. It is in the centre of the Plain of Jars and has a pleasant climate all year around, although it can become chilly on winter nights due to its elevation of 1,100 m. The long winding main street of Phonsavan looks like the setting of a David Lynch-inspired spaghetti western minus the tumbleweeds. As soon as you leave town the countryside is dominated by green hills and pine forests. Villages consist of colourful wooden houses. Ranching is the primary occupation. You will see more than one Hmong cowboy with brown and violet cowboy hats. During Hmong New Year there are even bullfights in Phonsavan. The best-known tourist attraction is the nearby Plain of Jars, which is to be nominated for UNESCO World Heritage status [read more].

Luang Prabang, or Louangphrabang is the former capital of Laos and a UNESCO World Heritage city. Set at the confluence of two rivers that almost surround the town, and beneath a temple-topped hill, Luang Prabang is a wonderful patchwork of traditional Lao wooden houses and hints of European architecture, reminders of when Laos was part of the French colony of Indochine. Golden-roofed wats (temples), decorated with mosaics and murals of the life of Buddha, sit under the gaze of wrap-around teak balconies and 19th century shuttered windows. All of this is set against a backdrop of verdant greenery and rugged mountains. Luang Prabang is a relatively small city with an atmospheric and charming personality. With UNESCO so closely involved and a largely responsible group of local business owners, the pressures of mass tourism have been held at bay, but for how much longer remains to be seen. Restaurants in the main street cater for luxury tourists. More typical Lao venues can still be found along the Mekong. Luang Prabang rose to prominence as the capital of the first Lao kingdom (Lan Xang, land of the million elephants) from 1353 [read more].

Vientiane (Lao: Vieng Chan) is the capital of Laos. Compared to the hectic, bustling capitals in other Southeast Asian countries, Vientiane’s relaxing atmosphere makes it feel like the small town it is. After you’ve done the round of temples, the best thing to do here has always been to wander down to the riverside, and watch the sun set on the Mekong. Of course, the booming tourism industry is changing this by slowly but surely bringing the excesses of Thailand and China to this formerly sleepy city. Just like any other Southeast Asian capital or major city, Vientiane is experiencing a building boom. Even its Presidential Palace is having a major makeover and addition, and a new convention centre has been built. Settled since at least 1000 CE, Vientiane became an important administrative city of the Kingdom of Lan Xang (“million elephants”) in 1545. Ransacked in 1828 by the Siamese, Vientiane sprung back to be again named the capital of the protectorate of Laos by the French, a position it kept after independence (1953) and after the communists took over in 1975 [read more].