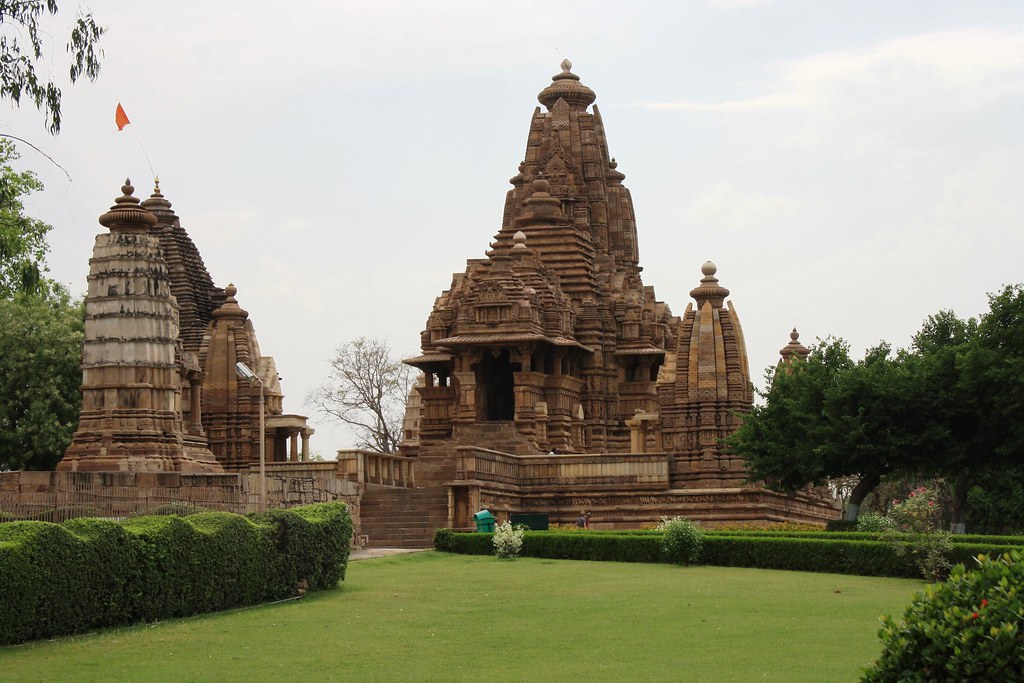 The temples at Khajuraho were built during the Chandella dynasty, which reached its apogee between 950 and 1050. Only about 20 temples remain; they fall into three distinct groups and belong to two different religions – Hinduism and Jainism. They strike a perfect balance between architecture and sculpture. The Temple of Kandariya is decorated with a profusion of sculptures that are among the greatest masterpieces of Indian art.

Chhatarpur is a city and a municipality in Chhatarpur district in the state of Madhya Pradesh, India. It is the administrative headquarters of Chhatarpur District. Chhatarpur was founded in 1785 and is named after the Bundela Rajput leader Chhatrasal, the founder of Bundelkhand independence, and contains his cenotaph. The state was ruled by his descendants until 1785. At that time the Ponwar clan of the Rajputs took control of Chhatarpur. The state was guaranteed to Kunwar Sone Singh Ponwar in 1806 by the British Raj. In 1854 Chhatarpur would have lapsed to the British government for want of direct heirs under the doctrine of lapse, but was conferred on Jagat Raj as a special act of grace. [read more]

Satna is a small town in Madhya Pradesh in India. It has a population of around 300,000. It is famous for its cement factories. See Chitrakoot. The place where Ramcharitra Manas was written. Very nice place to visit for greenery and to see ancient caves where Lord Ram spent around 12 years with his wife Sita and brother Lakshman. Here you can see River Mandakini Ramghat, Tulsi Mandir, Bharat Milap, Bharat Koop, H Dhara Mountain, Kamadgiri mountain etc. Very nice place for pilgrims. On Amavasya and Purnima you’ll get heavy crowd in Chitrakoot. Maihar: Sharda Mata temple. Dharkundi: Not many people know, but it is a wonderful place with greenery all around and a peaceful meditative atmosphere. Ramban: 15 km from Satna on Rewa Road. Ancient remains of temples and Hanumanji Mandir. Satna is very well connected by rail. Probably it is the best way to reach there. [read more]

Kanpur is the largest city in the state of Uttar Pradesh, India. It was known as Cawnpore in colonial times and is a major industrial centre of North India. The city is famous for its chemical (fertilizer, detergent), textile, and leather industries. The city was also an important British garrison during pre-independence era. Kanpur is a major industrial and commercial city on the banks of the River Ganges. It has an area of over 403.70 km² and had a population of around 2.7 million in the 2011 census. Kanpur is home to several educational institutions, including an Indian Institute of Technology (IIT-Kanpur), CSJM University, Harcourt Butler Technological Institute (HBTI), University Institute of Engineering and Technology, GSVM Medical College and Dr. Ambedkar Institute of Technology (AITH). [read more]