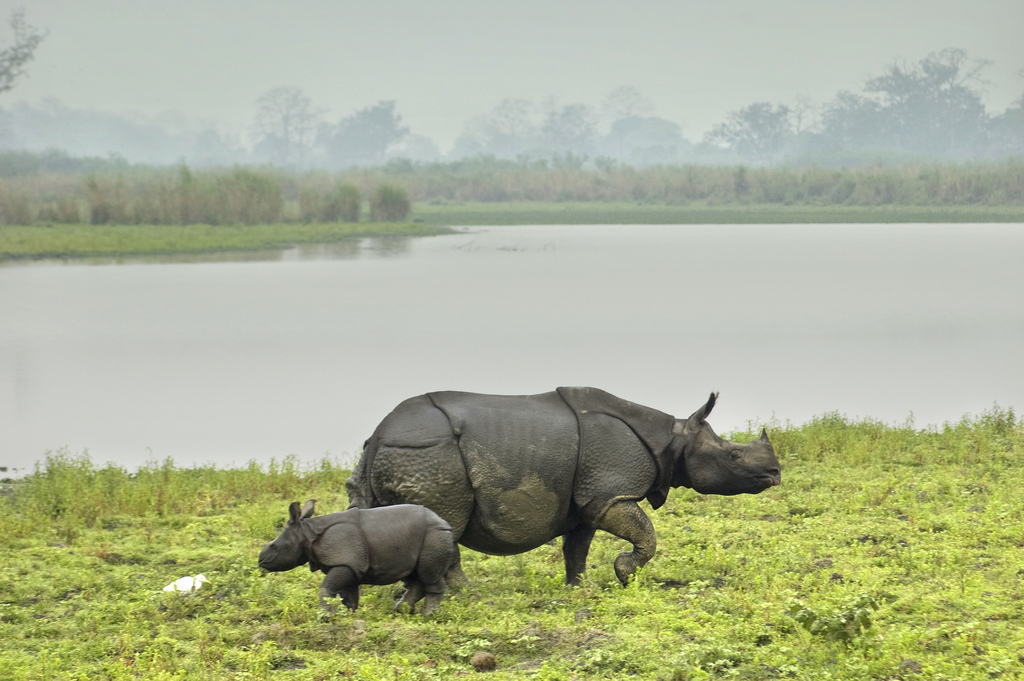 In the heart of Assam, this park is one of the last areas in eastern India undisturbed by a human presence. It is inhabited by the world’s largest population of one-horned rhinoceroses, as well as many mammals, including tigers, elephants, panthers and bears, and thousands of birds.

Kaziranga National Park represents one of the last unmodified natural areas in the north-eastern region of India. Covering 42,996 ha, and located in the State of Assam it is the single largest undisturbed and representative area in the Brahmaputra Valley floodplain. The fluctuations of the Brahmaputra River result in spectacular examples of riverine and fluvial processes in this vast area of wet alluvial tall grassland interspersed with numerous broad shallow pools fringed with reeds and patches of deciduous to semi-evergreen woodlands. Kaziranga is regarded as one of the finest wildlife refuges in the world. The park’s contribution in saving the Indian one-horned rhinoceros from the brink of extinction at the turn of the 20th century to harbouring the single largest population of this species is a spectacular conservation achievement. The property also harbours significant populations of other threatened species including tigers, elephants, wild water buffalo and bears as well as aquatic species including the Ganges River dolphin. It is an important area for migratory birds.

Criterion (ix): River fluctuations by the Brahmaputra river system result in spectacular examples of riverine and fluvial processes. River bank erosion, sedimentation and formation of new lands as well as new water-bodies, plus succession between grasslands and woodlands represents outstanding examples of significant and ongoing, dynamic ecological and biological processes. Wet alluvial grasslands occupy nearly two-thirds of the park area and are maintained by annual flooding and burning. These natural processes create complexes of habitats which are also responsible for a diverse range of predator/prey relationships.

Criterion (x): Kaziranga was inscribed for being the world’s major stronghold of the Indian one-horned rhino, having the single largest population of this species, currently estimated at over 2,000 animals. The property also provides habitat for a number of globally threatened species including tiger, Asian elephant, wild water buffalo, gaur, eastern swamp deer, Sambar deer, hog deer, capped langur, hoolock gibbon and sloth bear. The park has recorded one of the highest density of tiger in the country and has been declared a Tiger Reserve since 2007. The park’s location at the junction of the Australasia and Indo-Asian flyway means that the park’s wetlands play a crucial role for the conservation of globally threatened migratory bird species. The Endangered Ganges dolphin is also found in some of the closed oxbow lakes.

Tezpur is a historical city of Assam whose existence dates back centuries. It is on the north bank of the Brahmaputra and has a population of about 100,000. Tezpur means town of blood. The story behind this name is that when Tezpur was ruled by Bana Raja, his daughter Usha and Anirudha, grandson of Lord Krishna, fell in love with each other. When this came to the King’s notice he sternly objected and isolated Usha in a place called Agnigarh. But when Anirudha tried to take Usha away, there was a war between Lord Krishna and Bana Raja, leading to a major bloodshed with loss of many lives. Study from the history also says that the vicinity of the town has historical ruins of the 8th-9th century like Bamuni Hills. The ruins of Da Parbatia are a shining example of the architecture around the 4th century AD. Modern Tezpur was founded by the British colonial administration in 1835 as the headquarters of Darrang district. Tezpur today is the major commercial cum administrative centre of North Assam. It is also said to be the cultural capital of Assam, with many historical ruins attesting to its past. [read more]

Jorhat is a city of 70,000 in Assam. It was the capital of Ahom Kingdom. Being in Jorhat means you are in the cultural center of the state of Assam. Geographically situated in the Upper Assam region, Jorhat has the historical city of Sivasagar (the former Ahom Dynasty’s Capital) on one end of the district and the Kaziranga National Park on the other. Rented Taxi services (both pre-paid and post-paid) can be arranged from most hotels and lodges in the city. Daily Ferry Boats to the world’s largest riverine island of Majuli can be boarded from Jorhat and most of those travel arrangements can be made straight from the city hotels. Do visit Kaziranga National Park located 96 km from Jorhat, a journey likely to take around two hours by road. The park is open from November to April. The park covers some 430 sq km of varied terrain. The elephant grass, cane, forest and swamps offer a variety of habitats for the local wildlife. This includes the one horned rhino, wild buffalo, sambar deer and wild pig as well as a wide range of birds. [read more]

Guwahati, also Gauhati, is the largest city in the state of Assam, Northeast India. Dispur, the state’s capital, is in the circuit city region. Today, Guwahati is one of the fastest growing cities of India and is the second-largest metropolis in eastern India after Kolkata. Excavations trace the origins of the city to around the 4th century and it was the capital of Assam until the 10th century. Currently, the rapidly-growing metropolis has a population of more than 1.8 million and encompasses an area of over 360 km2, making it the largest city in the state and the region. It is the main center for shopping, retail and business; attracting people from all over the north east as well as from Eastern Bhutan. The slow, meandering Brahmaputra River is a focal point of the downtown while the lush hills of the Shillong Plateau provide a verdant backdrop for the suburbs. The pleasant environment, however, is somewhat tempered by the inadequate investment in the region, which is apparent from the low quality of roads. [read more]