The island of Itsukushima, in the Seto inland sea, has been a holy place of Shintoism since the earliest times. The first shrine buildings here were probably erected in the 6th century. The present shrine dates from the 12th century and the harmoniously arranged buildings reveal great artistic and technical skill. The shrine plays on the contrasts in colour and form between mountains and sea and illustrates the Japanese concept of scenic beauty, which combines nature and human creativity. 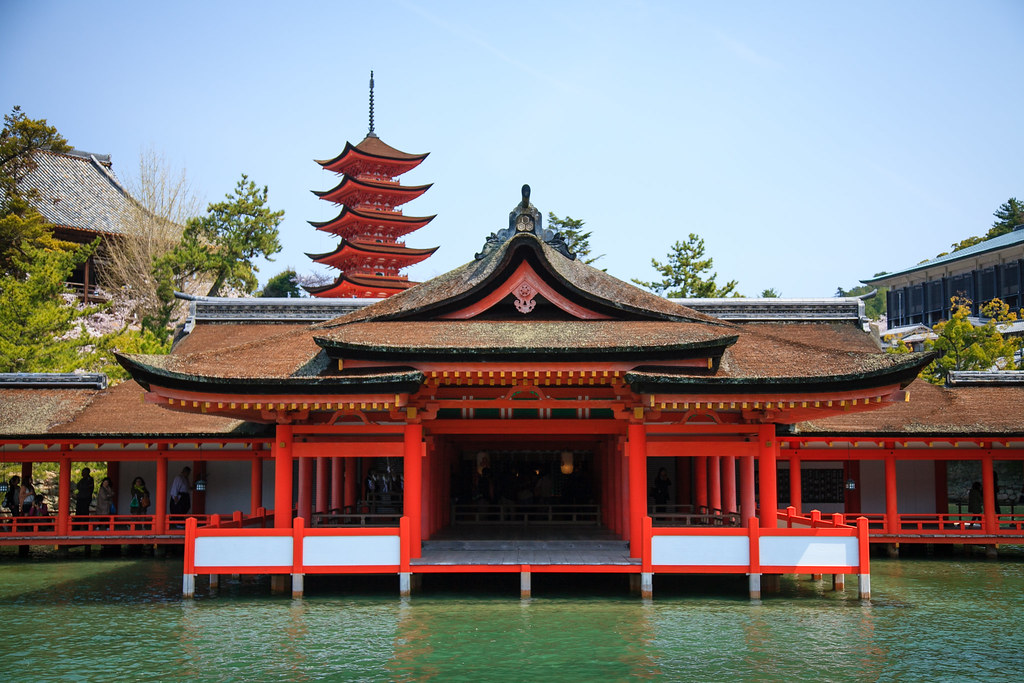 The Island of Itsukushima, in the Seto inland sea, has been a holy place of Shintoism since the earliest times. The first shrine buildings here were probably erected in the 6th century. The present shrine dates from the 13th century but is an accurate reflection of the12th century construction style and was founded by the most powerful leader of the time, Taira no Kiyomori.

The property covers 431.2 hectares on the Island of Itsukushima, and the buffer zone (2,634.3 ha) includes the rest of the island and part of the sea in front of Itukushima-jinia. The property comprises seventeen buildings and three other structures forming two shrine complexes (the Honsha complex forming the main shrine, and Sessha Marodo-jinja complex) and ancillary buildings as well as a forested area around Mt. Misen.

The buildings of Itsukushima-jinja are in the general tradition of Japanese Shinto architecture, in which a mountain or natural object becomes the focus of religious belief to be worshipped from a shrine, generally constructed at the foot of the mountain. The harmoniously arranged shrine buildings in the property are located on the sea and the scenery, with a trinity composed of the man-made architecture in the centre, the sea in the foreground, and the mountains in the background, and have become recognized as a Japanese standard of beauty. The sites reveal great artistic and technical skill and are unique among extant shrine buildings in Japan. The shrine is an outstanding and unique architectural work which combines manmade achievements and natural elements. It is tangible proof of the great achievements of Taira no Kiyomori.

Even though the buildings of Itsukushima-jinja have been reconstructed twice, this was done in a scrupulously accurate manner preserving the styles that prevailed from the late 12th century to the early 13th century.

The property is a Shinto shrine, a religion which centres on polytheistic nature worship, the origin of which goes back to primitive times. Over its long history, it has developed into a religion which became unique in the world, adopting continental influences to combine with its own indigenous traditions. Japanese spiritual life is deeply rooted in this religion.

Criterion (i): The configuration of the shrine buildings of ltsukushima-jinja presents an excellent architectural scene on the lines of the aristocratic residential style of this period.  It is an outstanding work combining manmade and natural elements. The buildings exhibit great artistic and technical merit and are sited on the sea with a backdrop of impressive mountains.

Criterion (ii): The shrine buildings of Itsukushima-jinja are in the general tradition of Shinto shrine architecture in Japan and provide invaluable information for the understanding of the evolving spiritual culture of the Japanese people, namely the Japanese concept of scenic beauty.  The most important aspect of Itsukushima-jinja is the setting of the shrine buildings as the central part of a trinity with the sea in the foreground and mountains in the background, recognized as a standard of beauty against which other examples of scenic beauty have come to be understood.

Criterion (iv): The buildings of Itsukushima-jinja, which through scrupulously accurate reconstructions have preserved styles from the late 12th and early 13th centuries, are outstanding examples of the ancient type of shrine architecture integrated with the surrounding landscape, the physical manifestation of humankind’s worship of nature.

Hiroshima is an industrial city of wide boulevards and criss-crossing rivers along the coast of the Seto Inland Sea. Although many only know it for the horrific split-second on August 6, 1945 when it became the site of the world’s first atomic bomb attack, it is now a modern cosmopolitan city with excellent cuisine and a bustling nightlife. Those expecting to step off the Shinkansen into a pile of smoldering rubble will be in for a surprise, as Hiroshima has all the ferroconcrete and blinking neon of any other modern Japanese city. Teenagers stream in and out of the station, where McDonald’s and the latest keitai (mobile phones) await; hapless salarymen rush down Aioi-dori to their next meeting, casting a bloodshot eye toward the seedy bars of Nagarekawa as they pass. At first glance, it can be hard to imagine that anything out of the ordinary ever happened here. Hiroshima was founded in 1589 on the delta formed by the Ota River, flowing out to the Seto Inland Sea [read more].

Matsuyama, meaning “pine mountain”, is the homely capital of Ehime prefecture. Quite provincial yet hospitable to travelers, and a hub of business and shopping amongst the lazy calm of the countryside, Matsuyama has much to offer in the way of curious literary and cultural assets. With a population of 510,000 (2019), Matsuyama is the largest city on Shikoku, though still noticeably sleepier than cities of comparable size on the Japanese mainland. The city is in a river basin formed by the flow of the Ishite and Shigenobu rivers, and nestled between the Ishizuchi mountain range to the south and Takanawa Mountains to the north. The center of town is Matsuyama-shi Station, south of Matsuyama Castle, which serves as a hub for local trams, buses, and the private Iyotetsu train line. JR Matsuyama Station is a short walk west. The climate of Matsuyama is overall mild and temperate — somewhat balmy in summer, with most rainfall occurring in late spring, and almost no snow in winter [read more].