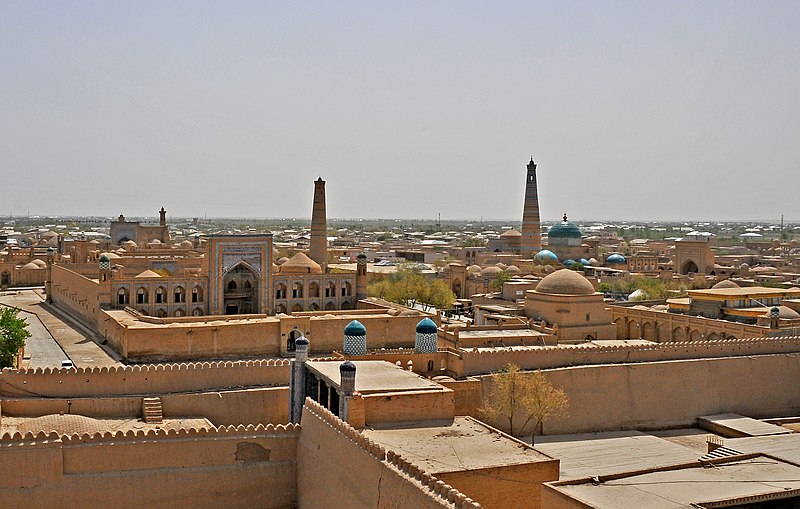 Itchan Kala is the inner town (protected by brick walls some 10 m high) of the old Khiva oasis, which was the last resting-place of caravans before crossing the desert to Iran. Although few very old monuments still remain, it is a coherent and well-preserved example of the Muslim architecture of Central Asia. There are several outstanding structures such as the Djuma Mosque, the mausoleums and the madrasas and the two magnificent palaces built at the beginning of the 19th century by Alla-Kulli-Khan.

Itchan Kala, the inner fortress of Khiva, is located to the South of the Amu Darya River (known as the Oxus in ancient times) in the Khorezm region of Uzbekistan and it was the last resting-place of caravans before crossing the desert to Persia.

Itchan Kala has a history that spans over two millennia. The inner town has 26 hectares and was built according to the ancient traditions of Central Asian town building, as a regular rectangle (650 by 400 meters) elongated from south to north and closed by brick fortification walls that are up to ten meters high.

The property is the site of 51 ancient monumental structures and 250 dwellings and displays remarkable types of architectural ensembles such as Djuma Mosque, Oq Mosque, madrasahs of Alla-Kulli-Khan, Muhammad Aminkhon, Muhammad Rakhimkhon, Mausoleums of Pahlavon Mahmoud, Sayid Allavuddin, Shergozikhon as well as caravanserais and markets. The attributes are outstanding examples of Islamic architecture of Central Asia. Djuma Mosque, a mosque with a covered courtyard designed for the rugged climate of Central Asia, is unique in its proportions and the structure of its inner dimensions (55m x 46m), faintly lit by two octagonal lanterns and adorned with 212 columns. The madrasahs, which make up the social areas, have majestic proportions with a simple decoration, and they form another type of Islamic architecture specific to Central Asia.

The place of the architectural heritage of Itchan Kala in the history of Central Asian architecture is determined not only by the abundance of surviving architectural monuments, but also by the unique contribution of Khorezmian master builders to Central Asian architecture and preservation of its classical traditions. The domestic architecture of Khiva, with its enclosed houses with their courtyard, reception room with portico or avian supported by delicately sculptured wooden posts, and private apartments, is also an important attribute of the property that can be studied in its 18th- and 20th-century morphological variants.

However, the outstanding qualities of Itchan Kala derive not so much from the individual monuments but also from the incomparable urban composition of the city, and from the harmony with which the major constructions of the 19thand 20th centuries were integrated into a traditional structure.

Criterion (iv) : Several monuments of Itchan Kala constitute remarkable and unique types of architectural ensembles, built according to the ancient traditions of Central Asia, which illustrate the development of Islamic architecture between the 14th to the 19th century.

Criterion (v) : The domestic architecture of Khiva, with traditional architectural style, represents an important example of human settlements in Central Asia by virtue of its design and construction.

Urgench is a city in Khorezm, in Uzbekistan. Get in by plane. Urgench International Airport (UGC IATA). Uzbekistan Airways operates twice daily flights from Tashkent (operated by RJ-85, Airbus 320 and sometimes IL 114, flying time 1:30 hrs) and a flight on Saturday (operated by B-757, flying time 1:40 hrs, return flight on Sundays). Flights (as per May 2011) were about 275,000 sum for return ticket and about 139,000 sum (€ 43) for a single ticket. You can also reach Urgench on Fridays on Uzbekistan Airways via Domodedovo International Airport in Moscow. By train: The brand new 1 Urgench Train Station has daily night trains to and from Tashkent that make the 19 hour journey across the desert with one major stop along the way in Samarkand. For departure times see the Uzbekistan#Get around section. Taxis from [Urgench] Railway Station to Khiva are about 30,000 to 80,000 UZS one way (September 2019). By bus: If you’re really budgeting, you can catch a bus to Urgench from the Hippodrome station in Tashkent [read more].

Khiva (Uzbek: Xiva, Хива; Russian: Хива) is a town in the western province of Khorezm in the Republic of Uzbekistan. Along with Samarkand and Bukhara, Khiva is an important and often overlooked historical site on what was once the Great Silk Road (Uzbek: Buyuk Ipak Yol’i). Famous for its long and brutal history as a slave trading post sandwiched in between the vast Kyzylkum and Karakum deserts, Khiva is now a quiet, sleepy oasis that awaits busloads of tourists instead of caravans of captives. It’s difficult to imagine what exactly ancient Khiva was like, considering the historical areas were restored to a scrubbed and squeaky-clean look by the Soviets in the 1970s. However, the clustered array of mosques, madrassahs and tiled minarets within an area of less than 3 km give you a sense of how crowded and bustling this town must have been throughout its history. Today, the city’s population is about 40,000 people [read more].

Nukus is a city in Karakalpakstan, Uzbekistan. It is the capital of the region However, even by Uzbek standards the town is fairly decrepit and most travellers only stay one night in order to see the Savitsky gallery. Despite this, the locals are a friendly lot. Learn a few words of Karakalpak and you’ll be rewarded with delighted smiles. See The Art Museum. Do not miss the Karakalpakstan State Museum of Art’s Igor Savitsky Collection with its unique collection of many thousands of works by dissenting artists from the Soviet Union during the period in which Stalinist socialist realism was the only permitted form of Soviet art. The documentary film The Desert of Forbidden Art is all about the collection and its history. Many believe this is the only compelling reason to visit Nukus. The Savitsky Collection is often said by locals to be the best museum in Uzbekistan. Due to being the closest major city to the Aral Sea, Nukus is a good place to start trips to the shore and to Moynoq [read more].