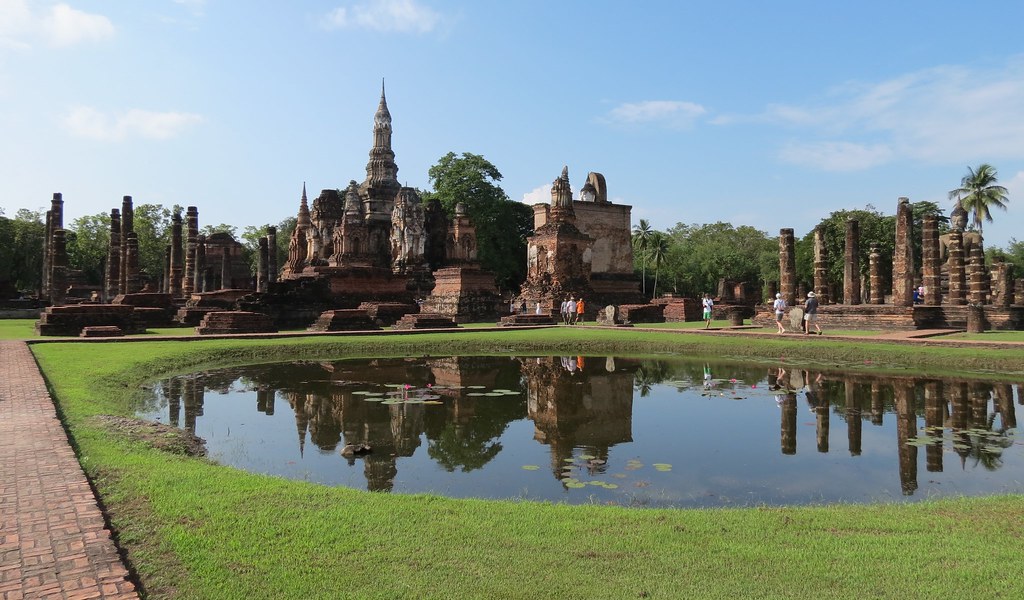 Sukhothai was the capital of the first Kingdom of Siam in the 13th and 14th centuries. It has a number of fine monuments, illustrating the beginnings of Thai architecture. The great civilization which evolved in the Kingdom of Sukhothai absorbed numerous influences and ancient local traditions; the rapid assimilation of all these elements forged what is known as the ‘Sukhothai style’. 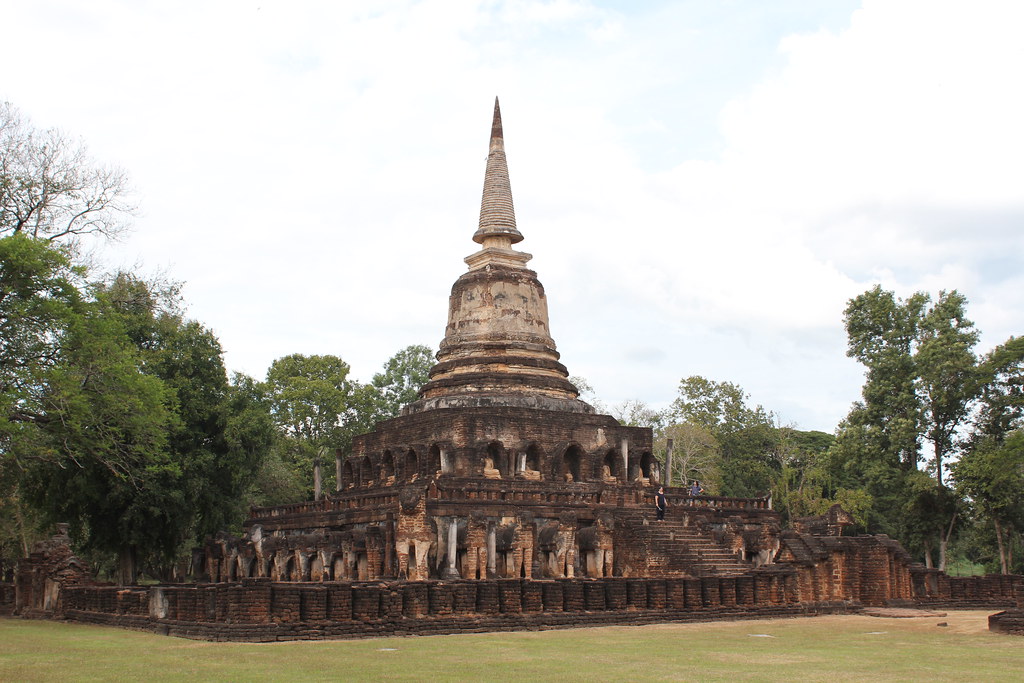 Situated in the lower northern region of present-day Thailand, the Historic Town of Sukhothai and Associated Historic Towns is a serial property consisting of three physically closely related ancient towns. The total property area is 11,852 ha., comprising Sukhothai 7,000 ha., Si Satchanalai 4,514 ha., and Kamphaeng Phet 338 ha. Sukhothai was the political and administrative capital of the first Kingdom of Siam in the 13th and 15th centuries. Si Satchanalai was the spiritual center of the kingdom and the site of numerous temples and Buddhist monasteries. Si Satchanalai was also the centre of the all-important ceramic export industry. The third town, Kamphaeng Phet, was located at the kingdom’s southern frontier and had important military functions in protecting the kingdom from foreign intruders as well as providing security for the kingdom’s extensive trading network. All three towns shared a common infrastructure to control water resources, and were linked by a major highway known as the Thanon Phra Ruang after the king who constructed it.

Sukhothai, Si Satchanalai and Kamphaeng Phet all shared a common language and alphabet, a common administrative and legal system, and other features which leave no doubt as to their unity as a single political entity. All three towns also boasted a number of fine monuments and works of monumental sculpture, illustrating the beginning of Thai architecture and art known as the “Sukhothai style.”

Under royal patronage, Buddhism flourished and many impressive monasteries were constructed of brick covered with carved stucco, illustrating the idealized beauty and the superhuman characteristics (mahapurisalakkhana) of the Lord Buddha and His Teachings. It is from the remains of these religious monuments that today we best know and appreciate the achievements of the people of the Historic Town of Sukhothai and AssociatedHistoricTowns.

The Kingdom of Sukhothai is accredited with the invention and development of many of the unique identifying characteristics of Siamese (Thai) culture, many of them attributed directly to the kingdom’s most famous and beloved King Ramkhamhaeng, who is considered the Founding Father of the Thai Nation.

The many examples of sculpture, wall paintings and decoration features found within the abandoned temple and monastery compounds are important in establishing the uniqueness and outstanding importance of the three towns. The art and architecture of Sukhothai, Si Satchanalai and Kamphaeng Phet have been extensively studied by art historians who have identified and catalogued its unique style, distinctive from Khmer and other earlier regional styles, and who consider the Buddhist monuments and their associated sculptures of the three towns to be masterpieces of artistic creation, giving the art style its own name: “Sukhothai style.” Stone inscriptions found at the sites provide evidence of the earliest examples of Thai writing and give a detailed account of the economy, religion, social organization and governance of the Sukhothai Kingdom.

In addition to being the place of pioneering achievements in architecture and art, language and writing, religion and law, the historic towns of the Sukhothai Kingdom were home to accomplished innovators in hydraulic engineering. They modified the landscape of the kingdom in such a way that water was dammed; reservoirs, ponds and canals were constructed; flooding controlled; and water was brought to serve a variety of agricultural, economic and ritual functions as well as to provide the towns’ inhabitants with water for their daily lives, avenues of communication, and protection in the form of city moats. From that day onwards until the Rattanakosin period, the kings of Thailand have been acknowledged for their ability to control the kingdom’s water.

Sukhothai was a unique state in terms of political and administrative systems which were remarkably egalitarian for the time, based on the patron-client relationships, powerful social and religious institutions, and codified laws.  The kingdom’s diverse economic system was based on agricultural production, but also depended heavily on industrial exports, especially of high-quality ceramics. Together, these features made Sukhothai a prosperous time and place, known in Thai history as a Golden Age and “The Happiness of Thai” or “The Dawn of Happiness.”

Criterion (i): The Historic Town of Sukhothai and Associated Historic Towns represent a masterpieces of the first distinctive Siamese architectural style, reflected in the planning of the towns, the many impressive civic and religious buildings, their urban infrastructure, and a sophisticated hydraulic (water management) system.

Criterion (iii): The Historic Town of Sukhothai and Associated Towns are representative of the first period of Siamese art and architecture, language and literature, religion, and the codification of law, from which was created the first Thai state.

Uttaradit is a city and province in lower northern Thailand. Uttradit has a long history developing through the years since pre-historic times. The site of the original town, then called Bang Pho Tha It, was on the right bank of the Nan River. It flourished as a port for goods transportation. As a result, King Rama V elevated its status to a province and re-named it Uttradit, literally the “port of the north”. Uttradit is 483 kilometres north of Bangkok and covers an area of 7,838 km2. See: Sak Yai. At Ban Pang Klua, Tambon Namkrai about 53 km away from the province with an area of about 20,000 rai and consists of various unsorted woods. Notably, this botanical forest has a biggest teak tree in the world: 37 m high with a circumference of 9.5 m. Around 1,500 years old it had reached 47 m tall until damaged in a windstorm. Klong Tron national park has a natural forest covering 324,241 rai or about 518.80 km2 [read more].

Phitsanulok is a historic city in Lower Northern Thailand, about halfway between Bangkok and Chiang Mai. It has a population of around 80,000. A city in the lower part of Northern Thailand rich in historical, cultural and natural attractions, Phitsanulok is some 377 kilometres from Bangkok. The province around it covers an area of 10,815 square kilometres, featuring mountains, plains and forest in the east and river basin. The Nan River, lifeline of the province, runs through the heart of the city. It is also a regional commerce and transportation hub. Many travellers will at least pass through Phitsanulok on way to and from the North. The city itself is not the most exciting or prettiest place in the world, but it can be useful for stocking up on supplies, and Phitsanulok is a great starting point for exploring the ancient Thai capital of Sukhothai. The city dates back to the 10th century when the Khmer ruled this region [read more].

Chiang Mai is the hub of northern Thailand. With a population of over 127,000 registered residents in the city (as of 2016), and almost one million in the metropolitan area, it is Thailand’s fourth-largest city. On a plain at an elevation of 316 m, surrounded by mountains and lush countryside, it is much greener and quieter than the capital and has a cosmopolitan air and a significant expatriate population, all factors which have led many from Bangkok to settle permanently in this “rose of the north”. Founded in 1296 CE, Chiang Mai is a culturally and historically interesting city, at one time the capital of the ancient Lanna kingdom. In the rolling foothills of the Himalayas 700 km north of Bangkok, until the 1920s it could only be reached by an arduous river journey or an elephant trek. This isolation helped preserve Chiang Mai’s distinctive charm, which remains intact. Chiang Mai’s historical centre is the walled city (“city” is chiang in the northern Thai dialect while mai is “new”, hence Chiang Mai translates as “new city”) [read more].