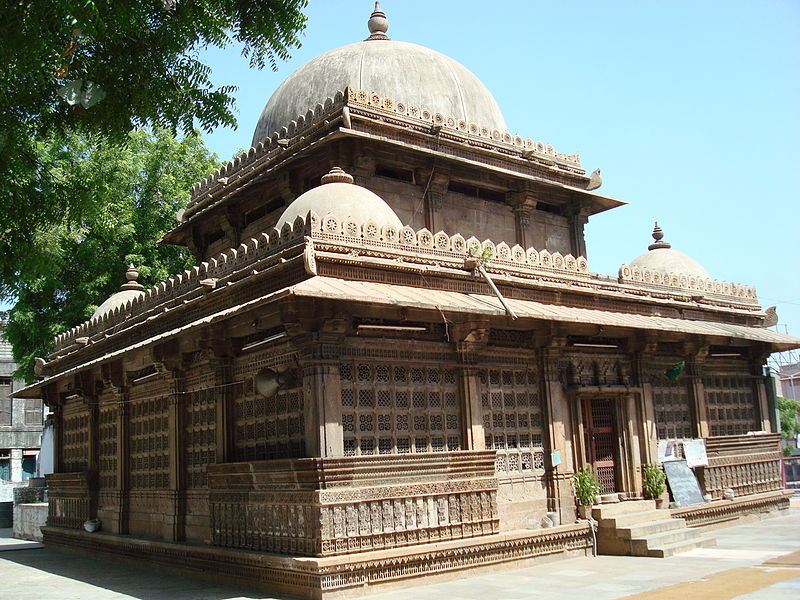 The walled city of Ahmadabad, founded by Sultan Ahmad Shah in the 15th century, on the eastern bank of the Sabarmati river, presents a rich architectural heritage from the sultanate period, notably the Bhadra citadel, the walls and gates of the Fort city and numerous mosques and tombs as well as important Hindu and Jain temples of later periods. The urban fabric is made up of densely-packed traditional houses (pols) in gated traditional streets (puras) with characteristic features such as bird feeders, public wells and religious institutions. The city continued to flourish as the capital of the State of Gujarat for six centuries, up to the present.

The walled city of Ahmadabad was founded by Sultan Ahmad Shah in 1411 AD on the eastern bank of the Sabarmati River. It continued to flourish as the capital of the State of Gujarat for six centuries.

The old city is considered as an archaeological entity with its plotting which has largely survived over centuries. Its urban archaeology strengthens its historic significance on the basis of remains from the Pre-Sultanate and Sultanate periods.

The architecture of the Sultanate period monuments exhibits a unique fusion of the multicultural character of the historic city. This heritage is associated with the complementary traditions embodied in other religious buildings and the old city’s very rich domestic wooden architecture with its distinctive “havelis” (neighbourhoods), “pols” (gated residential main streets), and khadkis (inner entrances to the pols) as the main constituents. These latter are presented as an expression of community organizational network, since they also constitute an integral component of the urban heritage of Ahmadabad.

The timber-based architecture of the historic city is of exceptional significance and is the most unique aspect of its heritage. It demonstrates Ahmadabad’s significant contribution to cultural traditions, to arts and crafts, to the design of structures and the selection of materials, and to its links with myths and symbolism that emphasized its cultural connections with the occupants. The typology of the city’s domestic architecture is presented and interpreted as an important example of regional architecture with a community-specific function and a family lifestyle that forms an important part of its heritage. The presence of institutions belonging to many religions (Hinduism, Islam, Buddhism, Jainism, Christianity, Zoroastrianism, Judaism) makes the historic urban structure of Ahmadabad an exceptional and unique example of multicultural coexistence.

Criterion (ii): The historic architecture of the city of the 15th century Sultanate period exhibited an important interchange of human values over its span of time which truly reflected the culture of the ruling migrant communities. The settlement planning was based on the respective tenets of human values and mutually accepted norms of community living and sharing. Its monumental buildings representative of the religious philosophy exemplified the best of the crafts and technology which saw growth of an important regional Sultanate architectural expression that is unparalleled in India. In order to establish their dominance in the region, the Sultanate rulers recycled the parts and elements of local religious buildings to reassemble those into building of mosques in the city. Many new mosques were also built in the manner of smaller edifices with maximum use of local craftsmen and masons, allowing them the full freedom to employ their indigenous craftsmanship. Therefore, the resultant architecture developed a unique provincial Sultanate idiom unknown in other parts of the subcontinent where local traditions and crafts were accepted in religious buildings of Islam, even if they did not strictly follow the tenets for Islamic religious buildings. The monuments of Sultanate period thus provide a unique phase of development of architecture and technology for monumental arts during the 15th century period of history of western India.

Criterion (v): Ahmadabad city’s settlement planning in a hierarchy of living environment, with streets as also community spaces, is representative of the local wisdom and sense of strong community bondage. The house is a self-sufficient unit with its own provisions for water, sanitation and climatic control (the court yard as the focus). Its image and its conception with religious symbolism expressed through wood carving and canonical bearings is an ingenious example of habitat. This, when adopted by the community as an acceptable agreeable form, generated an entire settlement pattern with community needs expressed in its public spaces at the settlement level and composed the self-sufficient gated street “pol”. Thus Ahmadabad’s settlement patterns of neighbouring close-packed pol provide an outstanding example of human habitation.

Ahmedabad or Amdavad (also spelled Ahmadabad) is the fifth largest city in India with a population of 6.5 million. Although it is the commercial hub of one of the most prosperous states of India, Gujarat, it’s not the state capital, which is its twin city of Gandhinagar, 30 km (19 mi) to the north. Ahmedabad is a good example of materialistic attitude and spirituality of self-renunciation. One of the fastest growing city in India, Ahmedabad is a centre for information technology, education and industries. Bhadra Fort, Shaking Minarets and Tran Darwaja are the historical sites of the city. Kankaria Lake and Vastrapur Lake are places which let you feel the pleasure of nature. If you want to enjoy the colourful side of this part, then pay a visit during the major festivals of Ahmedabad: Uttarayan and Navratri are two most famous festivals that are celebrated with great zeal and gusto. The… [read more].

Vadodara, a city in Gujarat in India, also known as Baroda, is named for the vad (banyan) trees that flourish in the area. Vadodara City is also known as cultural capital of Gujarat. The city has a cosmopolitan mixture of Indian nationals as well as that of Non Resident Indians with various tourists visiting this city. The major residents of this City happen to be from the native land of Gujarat and speak Gujarati. Being a multicultural mix the city has people who are generally found to be able to speak Gujarati, Hindi, Marathi, Sindhi as well as English. Most people are easily able to speak passable English, and in certain areas you will meet people that are fluent in English. Vadodara is built across the bank of Vishwamitri River. The east part of city is old city and the west part of city beyond the Vadodara Railway Station is recent and

Rajkot is a city in the state of Gujarat in Western India. Rajkot is most famous as the place where Mahatma Gandhi pursued his early education. The city is also famous for traditional sweets and dandiya/garba raas dances. Founded in 1620 by a member of Jadeja clan, whose descendants ruled the city until 1947, Rajkot gained economic importance in the early 19th century, under British protectorate. Farmers’ and traders’ councils were encouraged to grow under British Rule. Later the city plunged into the industrial Age with the first years dominated by casting industries. Even today Rajkot is a wealthy city that ranks the 22nd-fastest-growing city in the world. It’s also one of the cleanest cities of India. Rajkot lies in the middle of Kathiawar peninsula, halfway between Ahmedabad and Porbandar. It’s well worth one or two days stop although it’s not a monumental city. Rajkot rather appeals to spiritual tastes. As in… [read more].