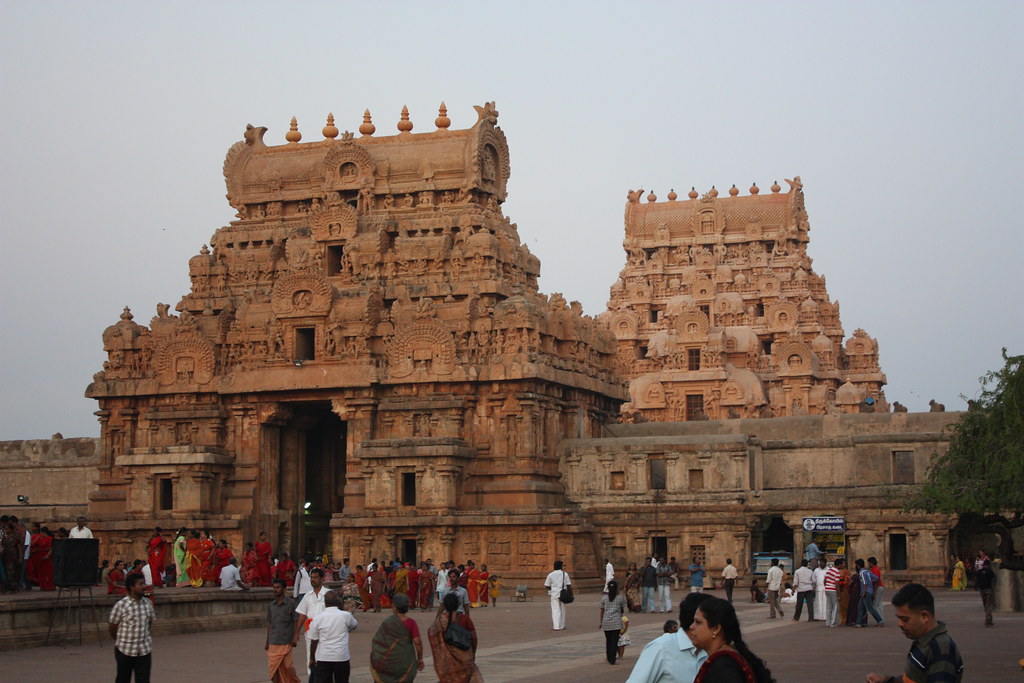 The Great Living Chola Temples were built by kings of the Chola Empire, which stretched over all of south India and the neighbouring islands. The site includes three great 11th- and 12th-century Temples: the Brihadisvara Temple at Thanjavur, the Brihadisvara Temple at Gangaikondacholisvaram and the Airavatesvara Temple at Darasuram. The Temple of Gangaikondacholisvaram, built by Rajendra I, was completed in 1035. Its 53-m vimana (sanctum tower) has recessed corners and a graceful upward curving movement, contrasting with the straight and severe tower at Thanjavur. The Airavatesvara temple complex, built by Rajaraja II, at Darasuram features a 24-m vimana and a stone image of Shiva. The temples testify to the brilliant achievements of the Chola in architecture, sculpture, painting and bronze casting.

The great Cholas established a powerful monarchy in the 9th CE at Thanjavur and in its surroundings. They enjoyed a long, eventful rule lasting for four and a half centuries with great achievements in all fields of royal endeavour such as military conquest, efficient administration, cultural assimilation and promotion of art. All three temples, the Brihadisvara at Thanjavur, the Brihadisvara at Gangaikondacholapuram and Airavatesvara at Darasuram, are living temples. The tradition of temple worship and rituals established and practised over a thousand years ago, based on still older Agamic texts, continues daily, weekly and annually, as an inseparable part of life of the people.

These three temple complexes therefore form a unique group, demonstrating a progressive development of high Chola architecture and art at its best and at the same time encapsulating a very distinctive period of Chola history and Tamil culture.

The Brihadisvara temple at Tanjavur marks the greatest achievement of the Chola architects. Known in the inscriptions as Dakshina Meru, the construction of this temple was inaugurated by the Chola King, Rajaraja I (985-1012 CE) possibly in the 19th regal year (1003-1004 CE) and consecrated by his own hands in the 25th regal year (1009-1010 CE). A massive colonnaded prakara with sub-shrines dedicated to the ashatadikpalas and a main entrance with gopura (known as Rajarajantiruvasal) encompasses the massive temple. The sanctum itself occupies the centre of the rear half of the rectangular court. The vimana soars to a height of 59.82meters over the ground. This grand elevation is punctuated by a high upapitha, adhisthana with bold mouldings; the ground tier (prastara) is divided into two levels, carrying images of Siva. Over this rises the 13 talas and is surmounted by an octagonal sikhara. There is a circumambulatory path all around the sanctum housing a massive linga.  The temple walls are embellished with expansive and exquisite mural paintings. Eighty-one of the one hundred and eight karanas, posed in Baharatanatya,are carved on the walls of second bhumi around the garbhagriha. There is a shrine dedicated to Amman dating to c.13th century.

Outside the temple enclosure are the fort walls of the Sivaganga Little Fort surrounded by a moat, and the Sivaganga Tank, constructed by the Nayaks of Tanjore of the 16th century who succeeded the imperial Cholas. The fort walls enclose and protect the temple complex within and form part of the protected area by the Archaeological Survey of India.

The Brihadisvara temple at Gangaikondacholapuram in the Perambalur district was built for Siva by Rajendra I (1012-1044 CE). The temple has sculptures of exceptional quality. The bronzes of Bhogasakti and Subrahmanya are masterpieces of Chola metal icons. The Saurapitha (Solar altar), the lotus altar with eight deities, is considered auspicious.

The Airavatesvara temple at Tanjavur was built by the Chola king Rajaraja II (1143-1173 CE.): it is much smaller in size as compared to the Brihadisvara temple at Tanjavur and Gangaikondacholapuram.  It differs from themin itshighly ornate execution. The temple consists of a sanctum without a circumambulatory path and axial mandapas. The front mandapa known in the inscriptions as Rajagambhiran tirumandapam, is unique as it was conceptualized as a chariot with wheels. The pillars of this mandapa are highly ornate. The elevation of all the units is elegant with sculptures dominating the architecture. A number of sculptures from this temple are the masterpieces of Chola art. The labelled miniature friezes extolling the events that happened to the 63 nayanmars (Saiva saints) are noteworthy and reflect the deep roots of Saivism in this region. The construction of a separate temple for Devi, slightly later than the main temple, indicates the emergence of the Amman shrine as an essential component of the South Indian temple complex.

Criterion (i): The three Chola temples of Southern India represent an outstanding creative achievement in the architectural conception of the pure form of the dravida type of temple.

Criterion (ii): The Brihadisvara Temple at Thanjavur became the first great example of the Chola temples, followed by a development of which the other two properties also bear witness.

Criterion (iii): The three Great Chola Temples are an exceptional and the most outstanding testimony to the development of the architecture of the Chola Empire and the Tamil civilisation in Southern India.

Criterion (iv): The Great Chola temples at Thanjavur, at Gangaikondacholapuram and Darasuram are outstanding examples of the architecture and the representation of the Chola ideology.

Tiruchirappalli (Trichy, Trichinopoly or Tiruchy) is a city in the state of Tamil Nadu in southern India. With a population of 916,857 as of 2011 Census. The climate in the city is extremely hot and low humid. Trichy is an ancient city of South India and it was the capital of Chola and Naicka kings for many centuries. The battle between the British (East Indian Company) & French with the help of locals marked the beginnings of the British Raj in the southern part of India. Trichy is well connected to Chennai the capital city of Tamil Nadu. Geographically located in the centre of Tamil Nadu, Trichy provides good connectivity between all major towns and cities in Tamil Nadu both by road and rail. Trichy district is famous for many ancient and popular temples and religious institutions. The bus network of Trichy is very developed and most of the city readily accessible by bus at reasonable prices [read more].

Pondicherry (officially Puducherry, also known as Pondy and Pondichérry), is a city and capital of the Pondicherry (officially Puducherry) union territory of Southern India. Pondichérry, though small in geographical size, was the largest French colony in India. The city has a long and interesting history of trade and war. There is a strong French influence on the architecture of the city, especially in the old quarters, with Rues and Boulevards lined with Mediterranean-style houses and bakeries, although the city remains very much Indian. French is still understood, and the whole city makes for a pleasant mix of the East and the West. It is also known as The French Riviera of the East (La Côte d’Azur de l’Est). If you have spent some time in Tamil Nadu and approached Pondichérry by land, you will very likely experience mild culture shock on discovering French architecture and restaurants serving steak and good wine [read more].

Madurai, formerly Madura, is the third-largest city in the Indian state of Tamil Nadu. It’s on the banks of the river Vaigai, and has been a major settlement for two millennia. It is one of the oldest continuously inhabited cities in the world. The city was the capital of the Pandyan kingdom was at Korkai, around 600 BCE, and was moved to Koodal (present-day Madurai) during the reign of Nedunj Cheliyan I. Madurai is famous for its temples built by Pandyan and Madurai Nayak kings in the Dravidian style of architecture. It is also one of India’s most outstanding Hindu pilgrimage centres. Madurai is also called as City of Junction (Koodal nagaram), City of Jasmine (Malligai maanagar), Temple city (Koil maanagar), City that never sleeps (Thoonga nagaram) and City of four junctions (Naanmada koodal). Madurai is one of the oldest cities of India and was ruled by Pandya kings over most of its history [read more].