At the foot of the Himalayas, Chitwan is one of the few remaining undisturbed vestiges of the ‘Terai’ region, which formerly extended over the foothills of India and Nepal. It has a particularly rich flora and fauna. One of the last populations of single-horned Asiatic rhinoceros lives in the park, which is also one of the last refuges of the Bengal tiger. 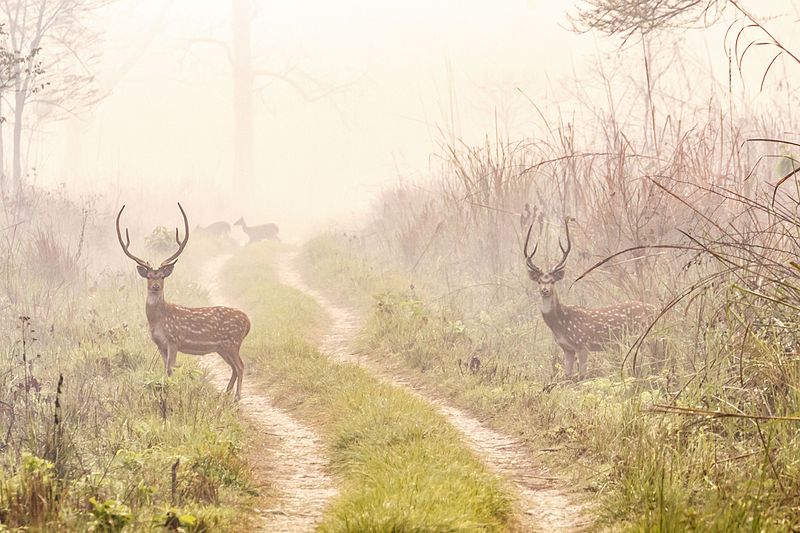 Nestled at the foot of the Himalayas, Chitwan has a particularly rich flora and fauna and is home to one of the last populations of single-horned Asiatic rhinoceros and is also one of the last refuges of the Bengal Tiger. Chitwan National Park (CNP), established in 1973, was Nepal’s first National Park. Located in the Southern Central Terai of Nepal, it formerly extended over the foothills, the property covers an area of 93,200 hectares, extends over four districts: Chitwan, Nawalparasi, Parsa and Makwanpur.

The park is the last surviving example of the natural ecosystems of the ‘Terai’ region and covers subtropical lowland, wedged between two east-west river valleys at the base of the Siwalik range of the outer Himalayas. The core area lies between the Narayani (Gandak) and Rapti rivers to the north and the Reu River and Nepal-India international border in the south, over the Sumeswar and Churia hills, and from the Dawney hills west of the Narayani, and borders with Parsa Wildlife Reserve to the east. In 1996, an area of 75,000 hectares consisting of forests and private lands and surrounding the park was declared as a buffer zone. In 2003, Beeshazar and associated lakes within the buffer zone were designated as a wetland of international importance under the Ramsar Convention.

Criteria (vii): The spectacular landscape, covered with lush vegetation and the Himalayas as the backdrop makes the park an area of exceptional natural beauty. The forested hills and changing river landscapes serve to make Chitwan one of the most stunning and attractive parts of Nepal’s lowlands. Situated in a river valley basin and characterized by steep cliffs on the south-facing slopes and a mosaic of riverine forest and grasslands along the river banks of the natural landscape makes the property amongst the most visited tourist destination of its kind in the region. The property includes the Narayani (Gandaki) river, the third-largest river in Nepal which originates in the high Himalayas and drains into the Bay of Bengal providing dramatic river views and scenery as well as the river terraces composed of layers of boulders and gravels.

The property includes two famous religious areas: Bikram Baba at Kasara and Balmiki Ashram in Tribeni, pilgrimage places for Hindus from nearby areas and India. This is also the land of the indigenous Tharu community who have inhabited the area for centuries and are well known for their unique cultural practices.

Criteria (ix): Constituting the largest and least disturbed example of sal forest and associated communities, Chitwan National Park is an outstanding example of biological evolution with a unique assemblage of native flora and fauna from the Siwalik and inner Terai ecosystems. The property includes the fragile Siwalik-hill ecosystem, covering some of the youngest examples of this as well as alluvial flood plains, representing examples of ongoing geological processes. The property is the last major surviving example of the natural ecosystems of the Terai and has witnessed minimal human impacts from the traditional resource dependency of people, particularly the aboriginal Tharu community living in and around the park.

Criteria (x): The combination of alluvial flood plains and riverine forest provides an excellent habitat for the Great One-horned Rhinoceros and the property is home for the second largest population of this species in the world. It is also prime habitat for the Bengal Tiger and supports a viable source population of this endangered species. Exceptionally high in species diversity, the park harbours 31% of mammals, 61% of birds, 34% of amphibians and reptiles, and 65% of fishes recorded in Nepal. Additionally, the park is famous for having one of the highest concentrations of birds in the world (over 350 species) and is recognized as one of the worlds’ biodiversity hotspots as designated by Conservation International and falls amongst WWFs’ 200 Global Eco-regions.

Bharatpur is a city in central-south Nepal. Located in Chitwan Valley, it includes the former community of Narayangarh (variation Narayanghat. Bharatpur is the district headquarters of the Chitwan District. It is the gateway to Chitwan Jungle National Park and the various resorts and tourists areas associated with it. with narayani’s boundary to nawaparasi. It is located at the center of Mahendra (east west) highway and Kathmandu – Birgunj (North-South) road corridor. The proximity of this city from Kathmandu (146 km), Pokhara (126 km), Butwal (114 km), Birganj (128 km), Hetauda (78 km) and Gorkha (67 km). In addition to good road access, Bharatpur Airport just to the east of the city has regular daily air services to Pokhara and Kathmandu. Not much to see in Bharatpur itself but it can be used as base for visiting the Chitwan National Park via Sauraha. [read more]

Kathmandu is the largest city and capital of Nepal and the namesake of the Kathmandu Valley. Once thought to be the fabled and inaccessible Shangri-La, Kathmandu is growing spot catering to a wide range of holiday types and budgets. As a result of considerable urban growth in recent decades, it is now part of one continuous urban area together with Patan to the south. According to a census conducted in 2011, Kathmandu metropolis alone has 2.5 million inhabitants, and the agglomerate has a population of more than 3 million inhabitants. The metropolitan city area is 50.67 square kilometres (19.56 sq mi) and has a population density of 3000 per km² and 17000 per km square in city. The city stands at an elevation of approximately 1,400 metres (4,600 ft) in the bowl-shaped Kathmandu Valley of central Nepal. [read more]

Pokhara is the third largest city in Nepal with about 350,000 people in 2013. It is the starting point for most of the treks in the Annapurna area. It is considered by some to be the most beautiful place in the world. Get in by bus from Kathmandu. Tourist buses (NPR700-800, 6-7h) and crowded local buses/microbuses (NPR400-600, 6-7h) travel the 200 km journey between Kathmandu and Pokhara almost every 15 minutes starting at 07:30 until late afternoon. Night buses are available, but the ride is painful. Greenline operates a convenient bus every morning between the popular tourist areas of Thamel in Kathmandu and Lakeside in Pokhara (USD20, lunch included). The road is winding with many switchbacks but offers wonderful views of hills and rural Nepalese lifestyle. [read more]