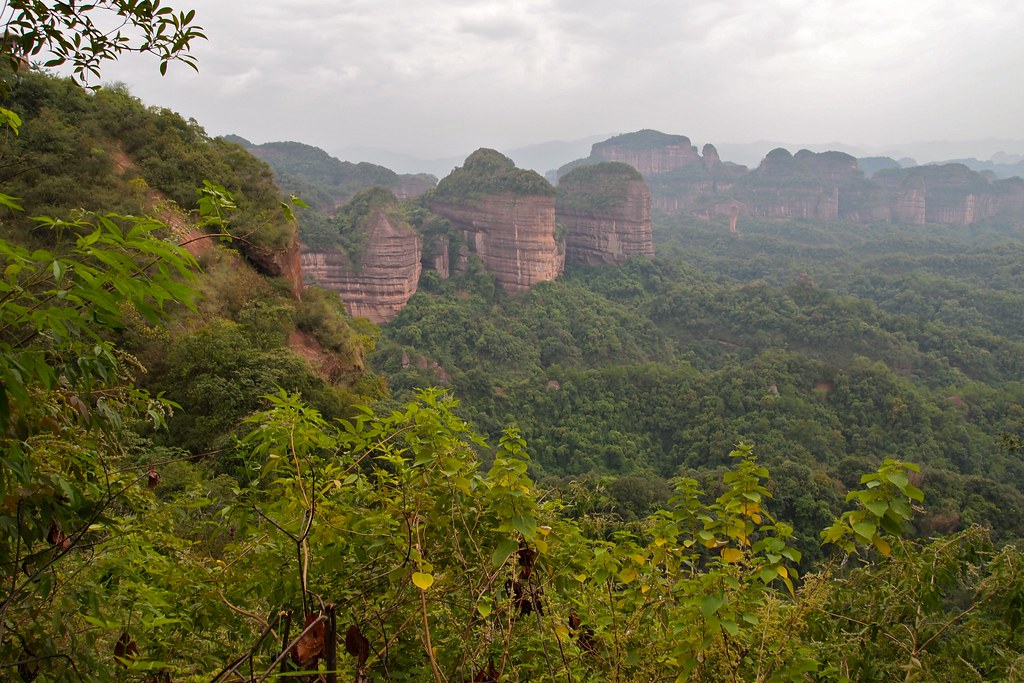 China Danxia is the name given in China to landscapes developed on continental red terrigenous sedimentary beds influenced by endogenous forces (including uplift) and exogenous forces (including weathering and erosion). The inscribed site comprises six areas found in the sub-tropical zone of south-west China. They are characterized by spectacular red cliffs and a range of erosional landforms, including dramatic natural pillars, towers, ravines, valleys and waterfalls. These rugged landscapes have helped to conserve sub-tropical broad-leaved evergreen forests, and host many species of flora and fauna, about 400 of which are considered rare or threatened.

China Danxia is a serial property comprising six component parts (Chishui, Taining, Langshan, Danxiashan, Longhushan, and Jianglangshan) found in the sub-tropical zone of south-eastern China within approximately 1700 km crescent shaped arc from Guizhou Province in the west to Zhejiang Province in the east.

China Danxia is the name given in China to landscapes developed on continental red terrigenous sedimentary beds influenced by endogenous forces (including uplift) and exogenous forces (including weathering and erosion). It is characterised by spectacular red cliffs and a range of erosional landforms, including dramatic natural pillars, towers, ravines, valleys and waterfalls. The process of its development is characterised by a particular rock sequence, tectonic background, climatic conditions, erosional processes and landforms and these processes have been presented as an interim model.

Due to the combined endogenic (tectonic uplift) and exogenic (climatic, erosion, weathering) forces, and other factors, the Danxia landforms have been developed in red sedimentary sequences continuously from the Neogene until the present.  The six component parts represent the most important examples of “least eroded” to “most eroded” Danxia landforms, providing a range of different aspects of the phenomenon, and illustrate both the range of landforms in relation to the forces and processes that formed them, together with a range of associated landscapes.

Criterion (vii): China Danxia is an impressive and unique landscape of great natural beauty. The reddish conglomerate and sandstone that form this landscape of exceptional natural beauty have been shaped into spectacular peaks, pillars, cliffs and imposing gorges. Together with the contrasting forests, winding rivers and majestic waterfalls, China Danxia presents a significant natural phenomenon.

Criterion (viii): China Danxia contains a wide variety of well developed red-beds landforms such as peaks, towers, mesas, cuestas, cliffs, valleys, caves and arches. Being shaped by both endogenous forces (including uplift) and exogenous forces (including weathering and erosion), China Danxia provides a range of different aspects of the phenomenon of physical landscape developed from continental (terrestrial) reddish conglomerate and sandstone in a warm, humid monsoon climate, illustrating both the range of landforms in relation to the forces and processes that formed them. The component parts represent the best examples of “least eroded” to “most eroded” Danxia landforms, displaying a clear landform sequence from “young” through “mature” to “old age”, and with each component site displaying characteristic geomorphologic features of a given stage.

Shaoguan is a small city in Guangdong Province in China. It is famous for its surrounding nature and the hot springs, and for being home to a large number of people from the Yao ethnic minority. The main language in Shaoguan is Hakka, though most people speak Cantonese and Mandarin as well. Some residents also speak a distinct dialect called Shaozhou Tuhua, which does not fall into any Chinese dialect family, and is mutually unintelligible with Mandarin, Cantonese or Hakka. The Yao ethnic minority speak their own language. See Nanhua Temple. The former temple of Huineng (the sixth patriarch of Zen Buddhism) and the location of his mummified remains. As such, the temple is an important pilgrimage site for practitioners of Zen Buddhism. Danxiashan. Canyon-like valleys and striking red and brown mountains. Nanling National Forest Park. Located in Ruyuan Yao Nationality Autonomous County, 8 kilometers from the bridge exit of Beijing-Zhuhai Expressway [read more].

Luzhou, formerly transliterated as Lu-chou or Luchow, is a prefecture-level city located in the southeast of Sichuan Province, China. The city, named Jiangyang until the Southern and Northern Dynasties, is known as the “Liquor City”. Situated at the confluence of the Tuo River and the Yangtze River, Luzhou is not only an important port on the Yangtze river, but also the largest port in both size and output in Sichuan province since Chongqing seceded from Sichuan province in 1997. As of 12 31 2017 estimation, its population was 4,317,200 inhabitants whom 998,900 lived in the built-up (or metro) area made of Jiangyang and Longmatan districts, as Naxi district is not conurbated yet. Luzhou, which borders Yunnan, Guizhou and Chongqing, is the only geographic junction of the four provinces, and was therefore the logical place for a port in ancient China. After the PRC was founded in 1949, Luzhou became the capital of southern Sichuan province [read more].

Chongqing (formerly spelled Chungking) is fast becoming the most economically important city in the interior West China, with an urban population of around 8.8 million. In addition to the central urban area, the municipality of Chongqing also includes some 80,000 km² (31,000 sq mi) of the neighboring countryside and smaller towns, with approximately 30 million people altogether. Chongqing is also the launching point for scenic boat trips down the Yangtze River through the Three Gorges Dam. The spectacular Buddhist Dazu Rock Carvings are three hours west of Chongqing City in the outlying Chongqing Municipality and are listed as an UNESCO World Heritage Site. Chongqing is notorious for its hot and humid weather. The air quality, winter or summer, can be challenging to people with respiratory problems due to massive amounts of smog. Chongqing has been ranked by the World Bank as one of the most polluted cities in the world. Chongqing is one of the four municipalities in China, the cities that are not part of a province but report directly to the national government; it is the only municipality that is not on the east coast, (the others are Beijing, Shanghai and Tianjin) [read more].