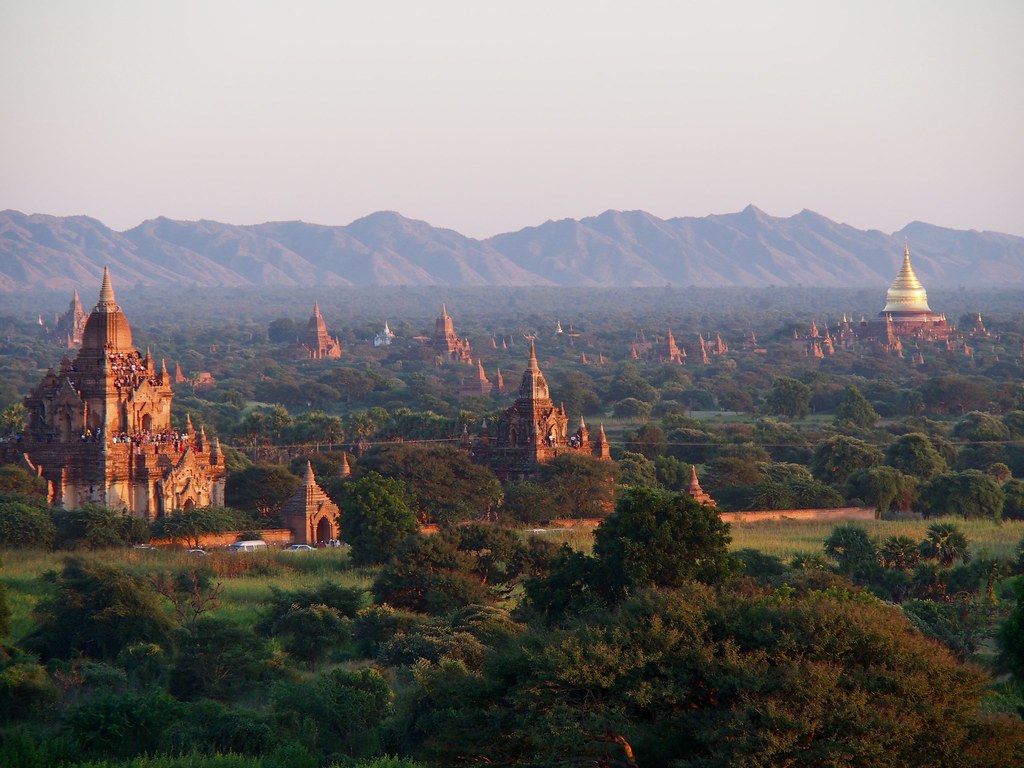 Lying on a bend of the Ayeyarwady River in the central plain of Myanmar, Bagan is a sacred landscape, featuring an exceptional range of Buddhist art and architecture. The seven components of the serial property include numerous temples, stupas, monasteries and places of pilgrimage, as well as archaeological remains, frescoes and sculptures. The property bears spectacular testimony to the peak of Bagan civilization (11th -13th centuries CE), when the site was the capital of a regional empire. This ensemble of monumental architecture reflects the strength of religious devotion of an early Buddhist empire.

Bagan is a sacred landscape which features an exceptional array of Buddhist art and architecture, demonstrates centuries of the cultural tradition of the Theravada Buddhist practice of merit making (Kammatic Buddhism), and provides dramatic evidence of the Bagan Period (Bagan Period 11th – 13th centuries), when redistributional Buddhism became a mechanism of political control, with the king effectively acting as the chief donor. During this period, the Bagan civilisation gained control of the river transport, extending its influence over a large area. The traditions of merit making resulted in a rapid increase in temple construction, peaking in the 13th century. The serial property of eight components is located on a bend in the Ayeyarwady River, in the central dry zone of Myanmar. Seven of the components are located on one side of the River, and one (component 8) is located on the opposite side. Intangible attributes of the property are reflected in Buddhist worship and merit-making activities, traditional cultural practices and farming. The serial property of eight components consists of 3,595 recorded monuments – including stupas, temples and other structures for Buddhist spiritual practice, extensive archaeological resources, and many inscriptions, murals and sculptures. Bagan is a complex, layered cultural landscape which also incorporates living communities and contemporary urban areas.

Criterion (iii): Bagan is an exceptional and continuing testimony to the Buddhist cultural tradition of merit making, and to the peak of Bagan civilisation in the 11th-13th centuries when it was the capital of a regional empire.

Criterion (iv): Bagan contains an extraordinary ensemble of Buddhist monumental architecture, reflecting the strength of religious devotion of an early major Buddhist empire. Within the context of the rich expressions and traditions of Buddhist architecture and art found throughout Asia, Bagan is distinctive and outstanding.

Criterion (vi): Bagan is an exceptional example of the living Buddhist beliefs and traditions of merit making, expressed through the remarkable number of surviving stupas, temples and monasteries, supported by continuing religious traditions and activities. While the evidence of practices of merit-making are common in many Buddhist sites and areas, the influences established in the Bagan period, and the scale and diversity of expressions, and continuing traditions make Bagan exceptional.

Pakokku is a largest city in the Magway Region in Myanmar, also known as Burma. It is situated about 30 km north-east of Bagan on the Irrawaddy River. It is the administration seat of Pakokku Township , Pakokku District and Gangaw District. Pakokku Bridge is part of the India–Myanmar–Thailand Trilateral Highway and is the longest bridge in Myanmar.It is home of the Pakokku airport. The city is the location of Computer University, Pakokku, Pakokku Education College, Technological University, Pakokku, and Pakokku University. Thiho Shin Pagoda(The Lord of Sri Lanka Pagoda), Shwe Ku Pagoda, Shwe Mothtaw Pagoda,Shwe Tant Tit, and Phaung Taw Oo Pagoda are famous pagodas which locate at Pakokku. Irrawaddy Bridge (Pakokku) is the longest bridge in Myanmar. Before British occupation, Pakokku was a small village of Pakhangyi District, Bagan township. The British occupied Upper Burma in 29 November, 1885. On 1 December 1887, British India Government established Pakokku Municipal. On… [read more].

Meiktila is a city in central Burma on the banks of Meiktila Lake in the Mandalay Region at the junctions of the Bagan-Taunggyi, Yangon-Mandalay and Meiktila-Myingyan highways. Because of its strategic position, Meiktila is home to Myanmar Air Force’s central command and Meiktila Air Force Base. The country’s main aerospace engineering university, Myanmar Aerospace Engineering University is also located in Meiktila. The name Meiktila comes from Mithila, the name of an ancient Indian kingdom. The history of Meiktila is closely tied to that of central Myanmar’s dry zone, home of the Bamar people. The region had been part of various Bamar kingdoms at least from 11th century CE to 19th century CE before the British Empire took over all of Upper Myanmar in 1885. Meiktila was part of the 1945 Battle of Meiktila and Mandalay, during which the Allied forces under William Slim defeated the Japanese forces. Soon after Burma’s independence from Britain… [read more].

Mandalay is the second largest city (after Yangon), and a former capital of Myanmar. The city is the economic and religious hub of upper Myanmar. The city is centred on the royal palace, and has wide avenues filled with bicycles and motorcycles. Mandalay is known for its millionaires, its monks (half of the country’s monks live in Mandalay and surrounding areas) and its cultural diversity. The very name Mandalay evokes the splendours of old Burma. But most people will be surprised to learn that Mandalay is not an old city, not even a medieval one, but rather a new city created by King Mingdon Min in 1857 as the new capital of the kingdom of Ava. Only two Burmese kings ruled from there, King Mingdon and King Thibaw, before the British conquest of Upper Burma in 1885. It was a city of splendour between 1858 and 1885, but most of the magnificence… [read more].