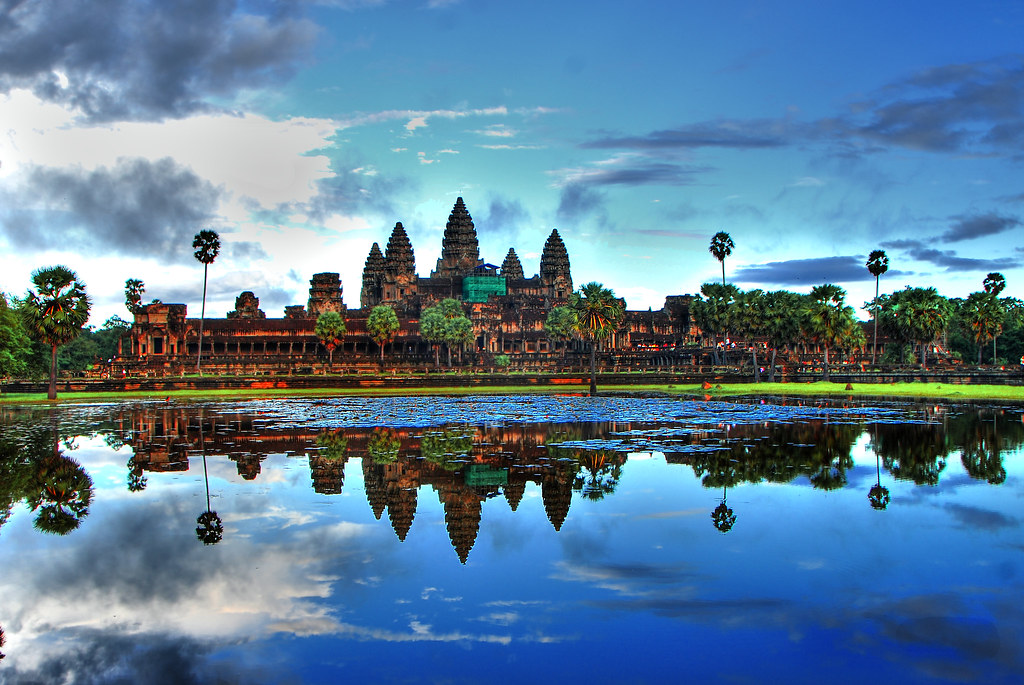 Angkor, in Cambodia’s northern province of Siem Reap, is one of the most important archaeological sites of Southeast Asia. It extends over approximately 400 square kilometres and consists of scores of temples, hydraulic structures (basins, dykes, reservoirs, canals) as well as communication routes. For several centuries Angkor, was the centre of the Khmer Kingdom. With impressive monuments, several different ancient urban plans and large water reservoirs, the site is a unique concentration of features testifying to an exceptional civilization. Temples such as Angkor Wat, the Bayon, Preah Khan and Ta Prohm, exemplars of Khmer architecture, are closely linked to their geographical context as well as being imbued with symbolic significance. The architecture and layout of the successive capitals bear witness to a high level of social order and ranking within the Khmer Empire. Angkor is therefore a major site exemplifying cultural, religious and symbolic values, as well as containing high architectural, archaeological and artistic significance.

The park is inhabited, and many villages, some of whom the ancestors are dating back to the Angkor period are scattered throughout the park. The population practices agriculture and more specifically rice cultivation.

Criterion (i): The Angkor complex represents the entire range of Khmer art from the 9th to the 14th centuries, and includes a number of indisputable artistic masterpieces (e.g. Angkor Wat, the Bayon, Banteay Srei).

Criterion (ii): The influence of Khmer art as developed at Angkor was a profound one over much of South-east Asia and played a fundamental role in its distinctive evolution.

Criterion (iii): The Khmer Empire of the 9th-14th centuries encompassed much of South-east Asia and played a formative role in the political and cultural development of the region. All that remains of that civilization is its rich heritage of cult structures in brick and stone.

Criterion (iv): Khmer architecture evolved largely from that of the Indian sub-continent, from which it soon became clearly distinct as it developed its own special characteristics, some independently evolved and others acquired from neighboring cultural traditions. The result was a new artistic horizon in oriental art and architecture.

The town of Siem Reap, in northern Cambodia, is the primary access point for the Angkor Archaeological Park. The name Siem Reap literally means “Siam Defeated”. These days, however, the only rampaging hordes are the tourists heading to the Angkor Archaeological Park. This once quaint village has become the largest boom town and construction site in Cambodia. It is quite laid-back and a pleasant place to stay while touring the temples. It is a nice compromise between observing Cambodian life and enjoying the amenities of modern services and entertainment, thanks to a large expatriate community. Since Siem Reap is a major tourist destination, prices in some instances are higher than elsewhere in Cambodia. Expect to receive almost constant offers for motodop and tuk-tuk rides, along with everything else which drivers may be able to offer to you. [read more]

Sisophon, also “Serei-sophon” or “Svay”, is a small town in North-western Cambodia. It is the capital of Banteay Meanchey Province. Stueng Sisophon is a medium-sized river that meanders round the southern circumference of the town. Control of Sisophon has often passed between the various regional powers. It is now part of Cambodia thanks to the French, whose sabre rattling forced the Siamese into relinquishing it (along with Siem Reap, Battambang and much of North-western Cambodia) in 1907. The town had been Siamese since 1867, thanks again to the French who gave it (and Siem Reap, Battambang and much of North-western Cambodia) to Siam in exchange for unobstructed French control over the remainder of Cambodia. Before then, a nominally independent Cambodia existed as a vassal state of Siam and Vietnam. [read more]

Battambang is Cambodia’s second most populous city, and a popular tourist destination due to the many nearby ancient temples, Buddhist shrines and the infamous bamboo railway. It is also the capital of Battambang Province. Despite being Cambodia’s second largest city, Battambang is often overlooked by those on the tourist trail who opt for the more popular Siem Reap and Phnom Penh. More quiet and less visited, however, Battambang has a less commercialized feel and provides an opportunity to see a slightly less Westernized Cambodian city. Remnants of French colonial architecture can still be spotted around the city, particularly north of the middle of the three main bridges, and there are food and lodging options that will cater to most budgets/tastes. The city centre is pretty compact and can be mostly explored by foot. Bicycles can be rented from most hotels or private companies for USD1-2 per day. [read more]