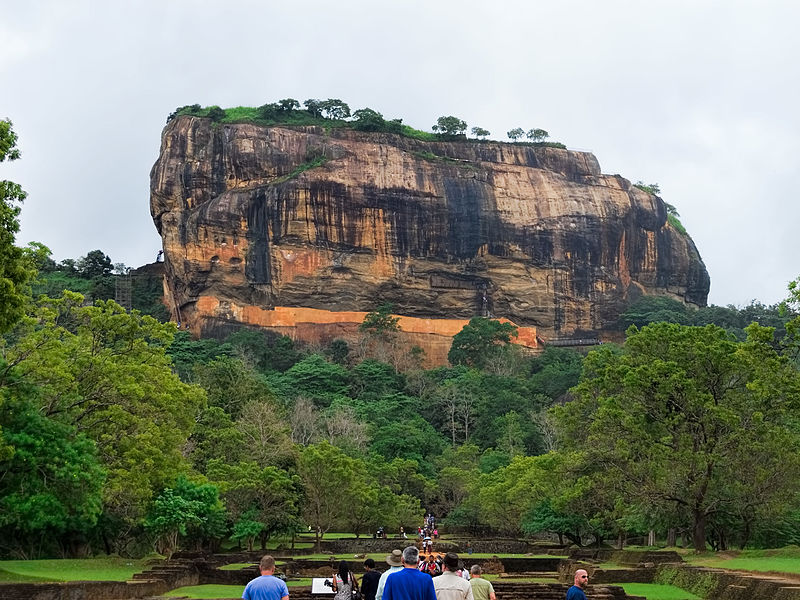 The ruins of the capital built by the parricidal King Kassapa I (477–95) lie on the steep slopes and at the summit of a granite peak standing some 180m high (the ‘Lion’s Rock’, which dominates the jungle from all sides). A series of galleries and staircases emerging from the mouth of a gigantic lion constructed of bricks and plaster provide access to the site.

The garden complex as seen from the top of Sigiriya rock (Chamal N/Wikimedia, CC BY-SA 3.0).

Dambulla is a city in Central province of Sri Lanka. Buses from Colombo (148 km west), Kandy (72 km south, 2-3 hours), Anuradhapura (2-3 hours), Sigiriya and other places arrive regularly at the Dambulla bus station located 1 km outside of the town on Kandy road. From Sigiriya, you can continue by direct bus to Dambulla. Buses run on this route at intervals of 30 minutes and cost 40 LKR. The last bus for Dambulla leaves at 18:00. Alternately, you can take a tuk-tuk to go back to Inamaluwa junction, from where you can take the bus to Dambulla as well, or you can go to Dambulla from Sigiriya by tuk-tuk which will cost not more than Rs. 1,000. The distance from Sigiriya to Dambulla is 20 km, and from Inamaluwa to Dambulla is 10 km. [read more]

Kandy is located at the centre of Sri Lanka 125 km away from Colombo and is generally recognised as the island nation’s cultural capital. It is on the UNESCO World Heritage List. This is the last kingdom of the country. Since it was conquered by the British only around 1815 you can still see the living traditions. Kandyans are usually proud of their heritage. Since the western elements has played a comparatively little role in the city most Kandyans uphold Buddhist values. Since it is in the cultural triangle the authorities try to retain this values as much as possible. Situation had changed recently because of many immigrants coming from other parts of the country. So don’t expect to find the honest Kandyans they describe in the colonial literature now. Be careful with your belongings and the people whom you associate with. [read more]

Colombo is the largest city and commercial capital of Sri Lanka. Former capital of the nation, Colombo is still perceived by many as the capital of the nation and is located just beyond the suburb of Sri Jayawardenepura Kotte, the official capital. Due to it being on a strategic route in the Indian Ocean, Colombo hosts one of the busiest ports in South Asia, and was known to ancient traders 2,000 years ago. Today, the city is the central point of the country’s activities and is home to the majority of country’s restaurants and entertainment venues. Just like another typical South Asian big city, Colombo is congested, noisy, busy, and vibrant with a mixture of modern life and colonial buildings. It is the financial centre of the island and a popular tourist destination. [read more]