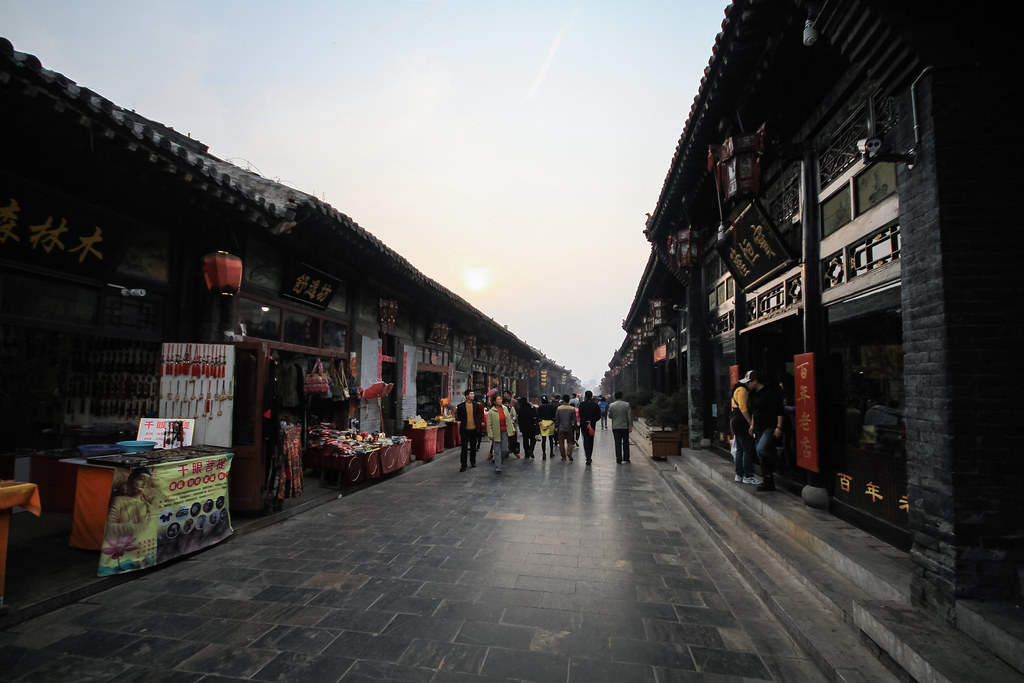 Ping Yao is an exceptionally well-preserved example of a traditional Han Chinese city, founded in the 14th century. Its urban fabric shows the evolution of architectural styles and town planning in Imperial China over five centuries. Of special interest are the imposing buildings associated with banking, for which Ping Yao was the major centre for the whole of China in the 19th and early 20th centuries.

Founded in the 14th century and covering an area of 225 hectares, the Ancient City of Ping Yao is a complete building complex including ancient walls, streets and lanes, shops, dwellings and temples. Its layout reflects perfectly the developments in architectural style and urban planning of the Han cities over more than five centuries. Particularly, from the 19th century to the early 20th century, the Ancient City of Ping Yao was a financial center for the whole of China. The nearly 4,000 existing shops and traditional dwellings in the town which are grand in form and exquisite in ornament bear witness to Ping Yao’s economic prosperity over a century. With more than 2,000 existing painted sculptures made in the Ming and Qing dynasties, Shuanglin Temple has been reputed as an “oriental art gallery of painted sculptures”. Wanfo Shrine, the main shrine of Zhenguo Temple, dating back to the Five Dynasties, is one of China’s earliest and most precious timber structure buildings in existence.

The Ancient City of Ping Yao is an outstanding example of Han cities in the Ming and Qing dynasties (from the 14th to 20th century). It retains all the Han city features, provides a complete picture of the cultural, social, economic and religious development in Chinese history, and it is of great value for studying the social form, economic structure, military defense, religious belief, traditional thinking, traditional ethics and dwelling form.

Criterion (ii): The townscape of Ancient City of Ping Yao excellently reflects the evolution of architectural styles and town planning in Imperial China over five centuries with contributions from different ethnicities and other parts of China.

Criterion (iv): The Ancient City of Ping Yao is an outstanding example of the Han Chinese city of the Ming and Qing Dynasties (14th-20th centuries) that has retained all its features to an exceptional degree.

Xiaoyi is a county-level city under the administration of Lüliang prefecture-level city, in Shanxi Province, China. Xiaoyi was built by the State of Jin in 594 BC, named Guayang in Spring and Autumn period. It was renamed Zhongyang in Three Kingdoms period and Yong’an in Northern Wei period. In 627 AD (Tang Dynasty), It was renamed Xiaoyi by Emperor Taizong of Tang. Xiaoyi is known for its mineral resources, including coal, Iron ore and bauxite. It is also known for walnuts and shadow play [read more].

Taiyuan is the capital of Shanxi Province and a common stopover between Wu Tai Shan and Pingyao. Situated next to Fenhe River and surrounded by mountains. Taiyuan has a history of over 2,500 years. Now, Taiyuan is important as home to heavy industry and mining. It has 3 notable sights that can be seen within half a day: the Shanxi Museum, the carvings at Chongshan Temple and The Twin Pagodas. See Temples: Jinci Temple, an ancient ancestral temple, was founded about 1400 years ago and was expanded during the Sui, Tang, Song, Yuan, Ming, and Qing Dynasties, resulting in a variety of architecutural styles. Today it comprises of over 100 halls, towers, pavilions, terraces, and bridges and includes some of the best Song Dynasty sculptures and buildings still extant in China as well as some lovely gardens and ancient trees. Well known structures at Jinci include the Hall of Offerings, The Flying Bridge Across the Fish Pond, and the Hall of the Holy Mother, the most famous building at Jinci [read more].

Xingtai, formerly known as Xingzhou and Shunde, is a prefecture-level city in southern Hebei province, People’s Republic of China. It has a total area of 12,486 km2 (4,821 sq mi) and administers 2 districts, 2 county-level cities and 15 counties. At the 2010 census, its population was 7,104,103 inhabitants whom 1,461,809 lived in the built-up (or metro) area made of 2 urban districts and Xingtai and Nanhe Counties largely being conurbated now. It borders Shijiazhuang and Hengshui in the north, Handan in the south, and the provinces of Shandong and Shanxi in the east and west respectively. Xingtai is the oldest city in North China. The history of Xingtai can be traced back 3500 years ago. During the Shang Dynasty, Xingtai functioned as a capital city. During the Zhou Dynasty, the State of Xing – from which the present name derives – was founded in the city. During the Warring States period, the state of Zhao made Xingtai its provisional capital [read more].